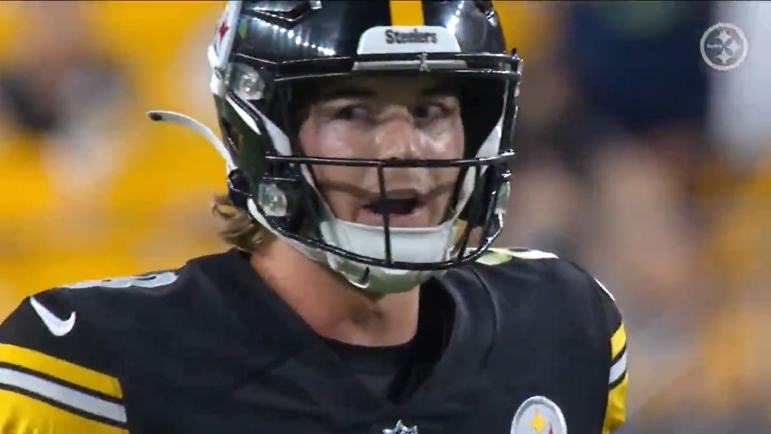 First game. First touchdown. First win. In front of the home crowd and the stadium you played college ball in. It’s hard to top what Kenny Pickett did in Saturday night’s win over the Seattle Seahawks. He capped things off with a 24-yard touchdown to WR Tyler Vaughns, breaking a 25-25 tie and giving Pittsburgh the victory. Speaking with reporters after the game, Pickett broke down what he saw on the play.

“I liked the match up,” he told reporters via Steelers.com post-game. “I liked the look we had. Free access. I was just thinking, ‘get TV the ball, he’ll get a bounds and let [kicker Nick Sciba] put it up for the win. But Tyler’s a great player, gave him a chance. He made a move and scored.”

Here’s a look at the play. Vaughns is lined up to the bottom of the screen with the cornerback playing ten yards off. That’s the “free access” Pickett’s referring to. At worst, a pitch-and-catch that would get Pittsburgh closer into field goal range, setting the accurate Sciba up for the game-winning kick. But Pickett made an on-time play, getting the ball out at the top of his drop, and Vaughns made the catch before the corner could close. He shook the corner, turned upfield, and dove into the end zone.

It was Pickett’s final pass to mark a wildly successful debut. He finished the opener going 13/15 for 95 yards and a pair of touchdowns, hitting rookie back Jaylen Warren for a three-yard score for his first NFL touchdown. Pickett got the ball out on-time and in-rhythm and effectively used his legs on bootlegs and to scramble. He played within structure and didn’t make any jaw-dropping plays. But for a first start, he didn’t need to. He did everything that was asked of him and is a great building block to his next game. Next week’s preseason game should be used as Pittsburgh’s tune-up, meaning Pickett’s work may be a bit more limited. But he should see a ton of action in the finale against the Detroit Lions.