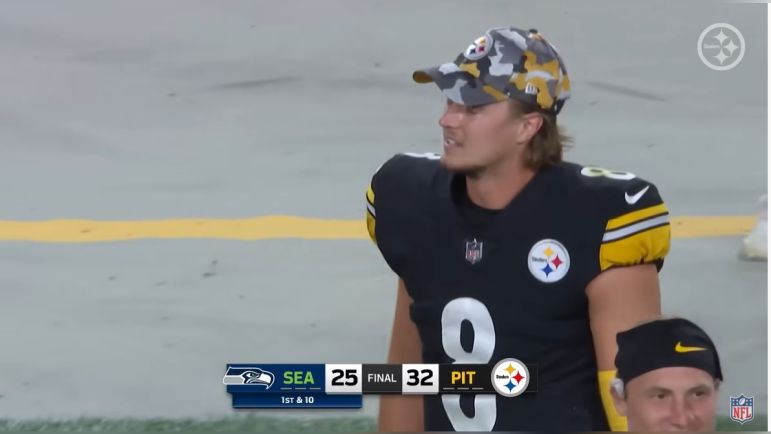 I did not know what to expect. The first Steelers preseason game of the 2022 season. A quarterback not named Ben Roethlisberger to lead the team for the first time since 2003. As an average fan, I don’t come to preseason games to see the starters or expected a win. My focus is usually on individual players and who may stand out to earn a spot on the 53-man roster. How does the roster depth look.

What I was not expecting was an exciting fun game to watch.

At the game, we stopped by Lennie and Cyndie’s Renegade tailgate then into Heinz … err … Acrisure Stadium. We got to talk to Chris Hoke who gave a shoutout to the Steelers Depot crew.

I didn’t hear the announced attendance, but my estimate is 50-55 thousand folks. The Steelers win the toss and receive the ball. Anthony McFarland returning kicks which surprised me. I also saw him as a gunner on the punt team at least once.

Mitch Trubisky let the Steelers on an opening drive touchdown. McFarland ran 24 yards on third and one to really open it up. Then Trubisky connected with Gunner Olszewski for the score. How refreshing to convert a third and short plus a touchdown on the opening drive.

Trubisky played one more series before giving way to Mason Rudolph. Steelers fans dislike Rudolph. Lots of booing when he came onto the field. Then the offensive line gave way, and he fumbled on the first play. The booing reached a crescendo. No way he could miss hearing it. I felt embarrassed for him. McFarland runs for seven. Then Rudolph launces a beautiful pass to the corner of the end zone and George Pickens corrals it for a 26 yard touchdown. It takes just one pass to change the boos to cheers. The play happened right in front of me. I really thought Pickens was out of bounds, but he showed amazing poise to secure the ball and land inbounds. Later in the game he had a big league sideline catch. He’s convinced me that he is the real deal.

Jaylen Warren impressed me during this game. On another drive he caught a pass and gained 34 yards. Then gained 13 yards running off right tackle. He fumbled but Miles Boykin recovered it for him. Steelers up 17-3 midway through second quarter.

The defense not so impressive. Geno Smith looked efficient at times and scrambled in to score near the end of the first half.

Kenny Pickett’s reception complete opposite of Rudolph’s when he came onto the field for Pittsburgh’s first possession of the second half. Fans cheering and chants of, “Kenny, Kenny,” Seattle marched down to tie the game 17-17 to start the half. The offense didn’t bother with third downs during this drive. Pickett to Sternberger for a first down. Then Steve Sims raced around the right end for 38 yards. Then Pickett to Warren for seven. Warren runs for a first down the next play. Pickett hits Warren again for first and goal. Then passes to Warren for the short touchdown. Steelers go for two, with Pickett and Connor Heyward connecting. It’s 25-17.

The offensive line and Mateo Durant’s pass protection failed, and Pickett sacked at the two. The punt out of the end zone gave Seattle great field position. The defense could not bottle-up Drew Lock nor stop the run. Just five plays to score from 55 yards away and then a two-point conversion to ties the game again at 25. Way too easy. The defenders fighting for spots on the roster must make a splash.

Teams trade punts but Pickett and the offense have the ball with 5:59 to go. Master Teague runs five times for 31 yards during the drive. He is a pile-driver. Pickett also scrambles four yards for a first down. But on third and one, Teague goes up the middle and the referees say he didn’t gain an inch. I don’t know what the replays on television showed, but the replay in the stadium showed Teague making that first down. Boooo! The play stands and Seattle sacks Pickett on fourth down. The Seahawks have the ball in their own territory with just 1:17 to play. Many fans are still in their seats, and winning games in the preseason is not supposed to matter.

On Seattle’s first play Mike Robinson strips Drew Lock of the ball and Tuzar Skipper recovers. The stadium is rocking! Pickett scrambles for four. Durant gains five more. Mike Tomlin expends a second timeout. One left to set up for a field goal which would be a 52-yard attempt if the first down not converted. Pickett passes to Cody White who just gets the first down. Pickett scrambles again and dives forward for eight yards. “Ken-ny, Ken-ny.” On second and two from the 24, Pickett finds Tyler Vaughns who turns on the jets and dives for the touchdown on the right cone. Acrisure Stadium is going nuts.

With three seconds left, Seattle receives the kick and tries some razzle dazzle, passing the ball back and forth looking for an opening to go downfield to tie the game. I mistakenly thought it was Donovan Jeter (number 66), but it was Khalil Davis (number 68) who demolished a Seahawk to blow-up the play and end the game. Fans loved the huge hit and intense end to an entertaining preseason game.

For this game, Ted Webb joined me. He drove up from North Carolina to see some practices at Saint Vincent’s then spent an extra day to attend the game.

Prior to the game we went to see South Pitt Hooligans rugby team play an alumni match. I got to hook up with former Cal U rugby teammates Bill Agnew and young Don Ratkiewicz. It was a special day as another former Cal U rugger, Justin Jewell attended the game with his mother. They tragically lost brother and son earlier this year and South Pitt played the game in his honor and provided some proceeds for his widow. Just a bit of Pittsburgh sports camaraderie.

Young Don told me he had a janitorial job just out of high school. He was assigned to clean the Steelers offices shortly after Three Rivers Stadium opened. He went to clean Art Rooney’s office. Don couldn’t resist calling his mom to tell her where he was. The Chief walked in to see Don at his desk talking on the phone. Don embarrassed went to hang up, but the Chief waved and said keep talking I’m just stopping in to pick something up. Don finished talking and went about his duties. He went into the bathroom and his eyes popped wide open as the Chief had left a turd floating in the toilet bowl. Don went to flush it down but noticed that it was actually the waterlogged stub of a cigar. Don says he briefly considered fishing it out for a souvenir but down the drain it went.

First, its just one preseason game with many starters not on the field. So, important to remember this is part of a process and nothing to lock in.

Fans in the stadium did not worry that stars like T.J. Watt, Minkah Fitzpatrick, Cam Heyward, Najee Harris, Pat Freiermuth, Chase Claypool, and Diontae Johnson did not play. They wanted an entertaining game and see how the offense looked even missing key components. And the Steelers rewarded them.

While not All-Pro candidates, all three quarterbacks showed they can lead scoring drives. Jaylen Warren and Master Teague gained some ground as running backs. But Anthony McFarland showed versatility on offense and special teams. The offensive appeared better in the rushing attack than in pass protection as a unit. The Steelers have a lot of talented receivers with George Pickens leading the group. Connor Heyward contributed on offense and special teams. I think Pickens likes having Heyward on the field with him.

The defense underperformed. Seattle was able to run the ball and both Geno Smith and Drew Lock completed passes with relative ease. Devin Bush appeared to miss filling a hole on a long run. The defensive line did not penetrate. And there were a couple plays that Seahawk receivers were wide open. That said, defenders tackling like their jobs depended on it. Ahkello Witherspoon and Damontae Kazee dinged up making tackles. Karl Joseph also hurt early in the game. Mike Robinson came up with a big play to put Pittsburgh back in the game.

Steelers stop Seahawks on third and one #HereWeGo pic.twitter.com/YxDB2f9RAo

Just a preseason game. But both players and fans enthused. It was very entertaining to be there. Here we go.

I always like to include a bit of music. The Steelers moving forward. New stadium name; New quarterback; A new edition of the Pittsburgh Steelers. Here is Turn the Page by Bob Seger.