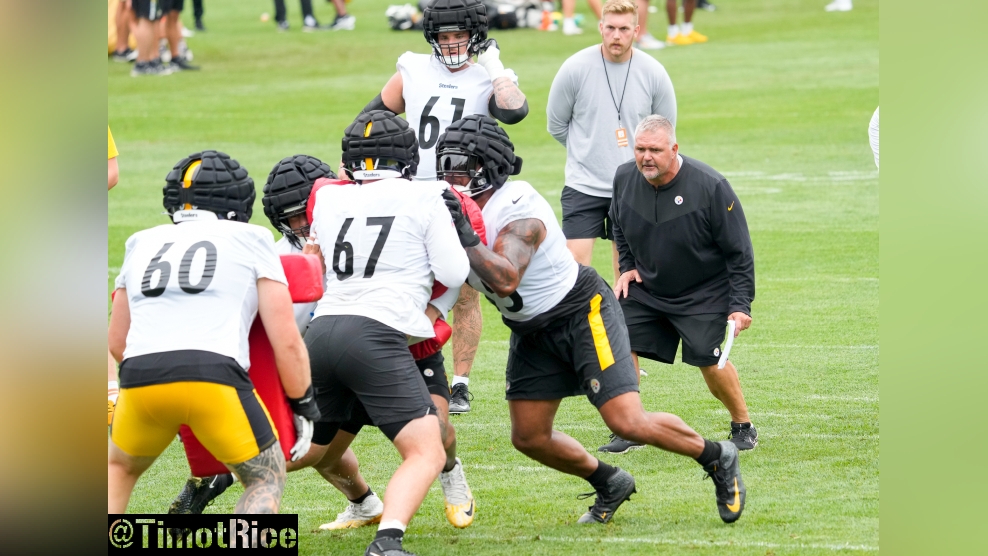 Last season, the Pittsburgh Steelers experienced an overhaul along the offensive line unlike anything we have seen in recent memory. Long-tenured starters Alejandro Villanueva, David DeCastro, Maurkice Pouncey, and Matt Feiler all departed the team via free agency or retirement, leaving Chukwuma Okorafor as the lone returning starter of the 2020 unit for the 2021 campaign. Pittsburgh went about signing G Trai Turner and drafted Kendrick Green and Dan Moore Jr. to pair with Kevin Dotson, who was elevated to a starting role to be their new starting OL in 2021.

Results were about what you would expect for an patchwork OL made on the fly after a flurry of talent went out the door, as Pittsburgh struggled establishing a consistent presence on the ground in the running game as well as allowed Ben Roethlisberger to get sacked 38 times, the most allowed by a Steelers’ O-Line in almost a decade.

Heading into 2022, Pittsburgh has made more of an effort to add talent to the unit up front, signing C Mason Cole and G James Daniels early in the free agency period. They also re-signed Okorafor to a three-year deal in the offseason and moved Kendrick Green to LG to compete with Kevin Dotson for the starting spot.

With the interior positions seemingly set outside of the competition at LG, all eyes fall on the bookends of the offensive line at tackle. When asked recently about Dan Moore Jr. and Chuks Okorafor’s development this offseason and in training camp, new OL Coach Pat Meyer expressed that the two have made strides to be the dudes Pittsburgh needs them to be if the 2022 OL is to improve to boost the overall quality of the offense.

“They work,” Meyer said about Moore and Okorafor on 93.7 The Fan. “They’re professionals in terms of how they come to work every day.  They are into football.  They are trying to do the things I asked them to do.  They’re progressing, those two have to be the guys outside and not let defenses set the edges on us.”

Last season, Moore was thrown into the fire as a fourth-round draft pick out of Texas A&M when Zach Banner dealt with complications to his knee recovery. He said as much this training camp, calling his rookie season “a difficult experience”, but appreciates the opportunity that Pittsburgh has shown by sticking to him as the penciled in starter in 2022. While his play was certainly shaky for a majority of the season, Moore showed progression at the end of 2021, giving Pittsburgh hope that he may be the long-term solution at LT should his work this offseason come to fruition as Meyer stated above.

Longest run by Najee Harris was 13 yards and came later in the 4th quarter on a 2nd & 1. Great blocking by Dan Moore Jr. and John Leglue on this play to spring Harris. Leglue picks off a blitzing Patrick Queen to boot. Gentry even holds his edge block just long enough. #Steelers pic.twitter.com/dWJhtbD9Ga

In the case of Okorafor, DPOY winner T.J. Watt recently commended him for his growth in terms of his play as well as his confidence, stating he has seen him progress well from their previous battles in training camp the last few years. While Okorafor’s play has been underwhelming as a run blocker and inconsistent as a pass protector thus far in his Steelers career, we must remember that he is still a young player, having just turned 25 this August after not picking up organized football until later in his high school career.

Okorafor, like Moore, had to overcome some adversity last season after starting out as a LT coming out of college, but was moved to RT in 2020 to start. He then switched back to LT with the intention of Banner to start on the right side, but Banner’s injury caused Pittsburgh to move Okorafor back to the right side to allow Moore to play in his more comfortable LT spot. This constant movement along with the lack of consistency along the OL the last couple years and going through three different OL coaching changes can make development difficult for Okorafor who hasn’t been phenomenal but hasn’t been terrible earlier given the third-round investment Pittsburgh put into him in 2018.

From Meyer’s comments, it appears as if both Moore and Okorafor have taken pleasant steps forward for the 2022 season and have the mindset of looking to improve after taking harsh criticism last year for their play as individuals as well as the entire offensive line. We will likely see some instances of that development this preseason as Pittsburgh experiments with their new OL unit, skill position players, and QBs to find the best combination to lead the offense this season. The OTs may not equate to a top ten unit in the league, but if they can climb out of the cellar from where they were last year, Pittsburgh should figure to see quite an improvement in play along the OL.