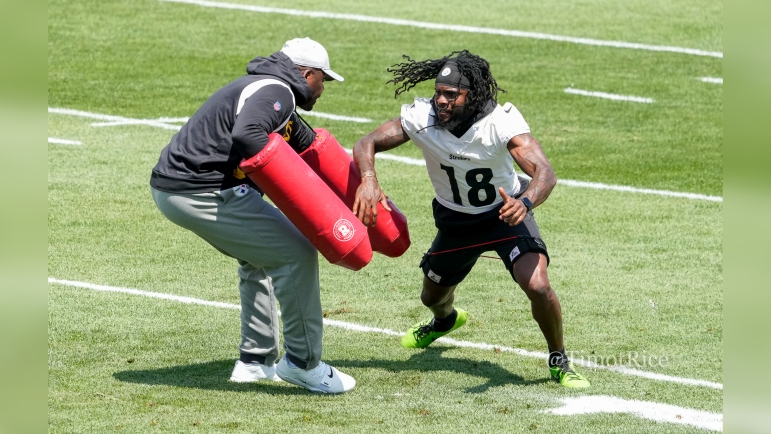 Since taking over as the General Manager of the Pittsburgh Steelers, Omar Khan has been rather busy on the transaction side of things.

In a little over two months as the new GM of the Steelers, Khan has already handed out lucrative contracts to safety Minkah Fitzpatrick, kicker Chris Boswell and now wide receiver Diontae Johnson. He also moved quickly to sign standout defensive lineman Larry Ogunjobi in free agency to try and fill the hole left by the retirement of Stephon Tuitt.

So far, Khan is off to a great start. Of the three long-term deals, the one for Johnson looked to be the least likely, considering the Steelers’ history of paying wide receivers after their first contracts overall. Appearing on The Mark Madden Show on 105.9 The X in Pittsburgh Tuesday afternoon, Khan spoke highly of Johnson and his leadership on and off the field, stating to Madden on his show that he found it important to retain such a key piece through 2024, and maybe even longer.

The Steelers and Khan did just that last week as Johnson signed a two-year, $36.7 million extension, including a $17 million signing bonus and $27 million in guarantees.

“We thought it was important for us to keep him around for the next couple years at least and hopefully for longer. He brings a lot to the table. We are excited to have him here,” Khan told host Mark Madden Tuesday, according to audio via 105.9 The X.

“…He’s an exciting player, brings a lot of energy to us. We value him as a football player,” Khan added in conversation to Madden, according to audio via 105.9 The X. “But we also value him as a teammate and a leader in the locker room.”

It was certainly important for the Steelers to keep their No. 1 wide receiver around through at least 2024 as the offense goes through a significant period of transition, especially under center. Johnson made his mark in the NFL becoming a consistent, reliable option for future Hall of Fame quarterback Ben Roethlisberger to target heavily in his first three seasons in the league out of Toledo.

Now though, Johnson has to show his impressive production, which included a career-high 107 receptions for 1,161 yards and eight touchdowns in 2021, wasn’t due to who was under center. That could be a bit of a challenge for Johnson with the likes of Mitch Trubisky, Mason Rudolph and rookie Kenny Pickett vying for the starting job on an offense that is aiming to be more run-heavy in 2022 as the quarterback — whomever wins the job — will be asked to be more of a game manager.

Still, Johnson was inked to what is essentially a bridge deal at the receiver position due to what he brings off the field in the locker room, just as much as for what he brings on the field. Quietly, he’s a great teammate, one that has the ear of leaders in the room. He leads mostly by example though, rarely talking. He sets the tone for the receiver room with his work ethic and preparation, which made it a relatively easy decision for Khan and the rest of the Steelers front office to extend their standout receiver.

As Khan pointed out to Madden Tuesday via 105.9 The X, he and the Steelers are hopeful it’s a partnership that extends beyond the end of Johnson’s new extension in 2024, keeping the standout receiver around much longer than anyone could have expected, based on position history in the black and gold.