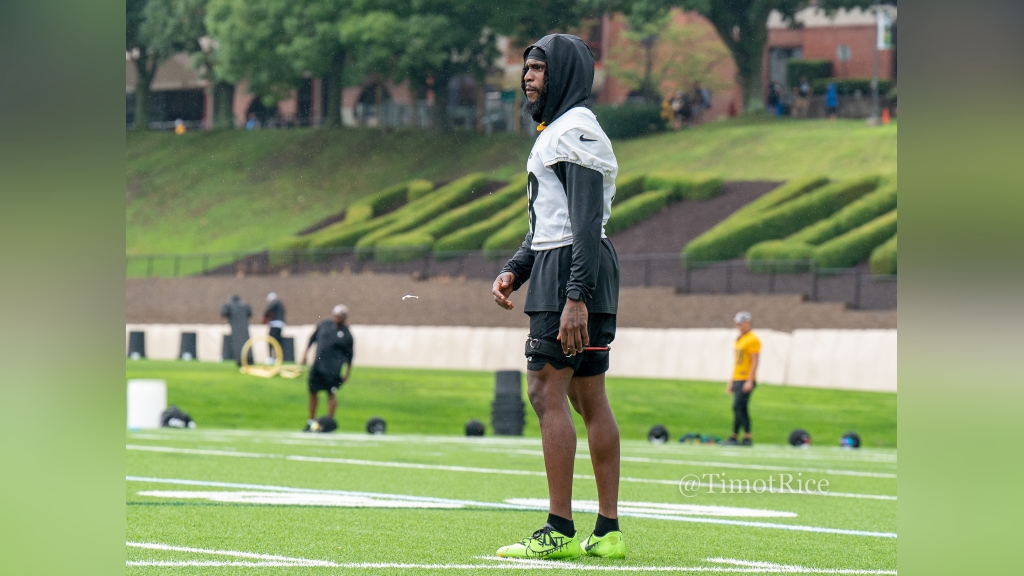 On Tuesday morning in Latrobe, PA at Saint Vincent College, Pittsburgh Steelers GM Omar Khan held a press conference to talk about various topics including the extension of K Chris Boswell as well as injury updates to several players currently sitting out of practice.

After giving his opening comments, Khan opened up for questions to the media in attendance which the first question, as you would have guessed, involved WR Diontae Johnson and his current hold in at training camp. When asked about how conversations with Diontae Johnson have been going thus far in training camp and if he had any updates on his contract status, Khan remained status quo in terms of holding back private information. However, he did divulge something that we can make note of.

“You know, conversations we have with Diontae and his representatives are going to stay between us and we won’t discuss them publicly, but we have been in conversations.” Khan said during Tuesday’s press conference, which was shown on the team’s YouTube channel.

It comes as no surprise that Khan wants to respect the process of the contract situation between the Steelers and Diontae Johnson by refusing to disclose any important details to the media to make public. However, Khan did mention at the end that he has been in conversation with Johnson’s representatives regarding a possible contract extension.

Up until this point, there was no real news coming out that either side had formally sat down to potentially hash out a new deal to keep Diontae Johnson in Pittsburgh for the foreseeable future. Khan made known today that those conversations are indeed happening at the least, which can be seen as a positive for anyone who wants to see Johnson continue his career in Pittsburgh past 2022.

When asked if he’s ok with Diontae sitting out of training camp practices, Khan mentioned that Diontae’s absence has given others the opportunity to get quality reps on the field.

“Obviously, you want everyone out practicing, but we’ve taken the approach that we’re using it as an opportunity to look at the other guys that are practicing, especially the young guys. It gets them some good work,” Khan continued regarding Diontae Johnson and his hold in. “Like I said, we want Diontae. We’re excited to have Diontae as a part of this team and we hope that he is going to be a Steeler for a long time.”

Johnson’s absence has opened the door for WRs like George Pickens and Cody White to get more reps at Johnson’s X receiver spot in the offense over the first few practices of training camp. Pickens has notably been impressing during those sessions, drawing praise from coaches, players, and fans alike for the impressive catches he is making on a daily basis. While Pittsburgh would prefer to have Johnson on the field, the extra reps have been beneficial for Pickens as well as the other WRs rotating in, speeding along his development in hopes of having him see the field early to start the season.

However, the big nugget Khan left in the quote above is that not only did he acknowledge that Diontae Johnson is a great player, but also, they actively want him a part of the team and to be a Pittsburgh Steeler for a long time. This reiterates his previous comment that he has been in contact with Johnson’s representatives, speaking to the fact that they are at least seeing what it would take to get a deal done with the Pro Bowl WR. Khan has commended Johnson’s talent and ability in the past, but now he has made it known that he foresees Johnson being a member of the organization going forward.

It will come down to if middle ground can be found between the Steelers and Johnson as both sides likely have a number they don’t want to move on. Still, with Pittsburgh having the cap space to get a deal done if they so choose as well as Khan’s comments about Johnson and his future with the team, the outlook of Johnson getting extended by the Steelers appears to be more optimistic than what it was prior to Tuesday’s press conference.