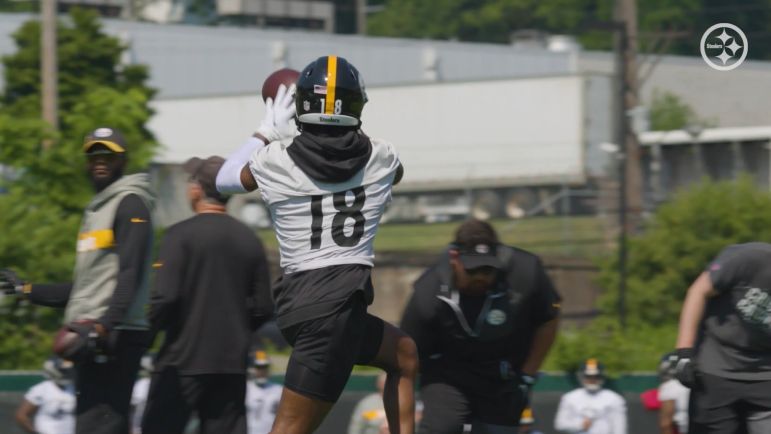 No one knows if the Pittsburgh Steelers and Diontae Johnson will hammer out a contract extension prior to Week One. But it’s clear both sides will explore a new deal in good faith. Khan went on Sirius Radio, joining Pat Kirwan and Jim Millers’ Moving The Chains show, and praised the way Johnson has handled his potential contract so far.

“Yeah, I can tell Diontae is a class act,” Khan told the show. I mean, he’s always handled himself extremely well and he understands the process. And I’m excited to see him in action this year in this offense.”

Listening to the conversation, Khan stammered a little bit through the answer, clearly not wanting to talk about Johnson’s situation too in-depth. He’s still a GM and this is still a business and you don’t want to say anything that will draw a big headline or hurt leverage in the negotiation process. Johnson has also been tight-lipped, practicing in full during mandatory minicamp and telling reporters he was focused on working hard instead of discussing his contract situation.

For now, there likely hasn’t been any talks between both sides. For non-QBs and the occasional star player, those talks don’t heat up until later in training camp. TJ Watt didn’t get a deal done until late in the summer and if Johnson gets paid, he’ll likely have a similar timeline.

As a first-time GM, Khan has his hands full when it comes to contract extensions. Three Steelers are in-line for new deals this year. Minkah Fitzpatrick is at the top and will become the highest-paid safety in football. Both sides want to get a deal done and frankly, it shouldn’t be terribly hard to hammer out the broad numbers, though Los Angeles’ Derwin James getting paid could throw a monkey wrench into things. Kicker Chris Boswell also deserves another extension. His potential deal wont be nearly as expensive as Fitzpatrick or Johnson’s but it’s one that should get done this summer.

Then there’s Johnson. It’s the most questionable one to occur this year. The receiver market has shot up over the last three months with Christian Kirk, Mike Williams, Davante Adams, Tyreek Hill, Cooper Kupp and others cashing in big since right before the start of free agency. It’s driven up Johnson’s price tag likely in the $20 million average yearly value vicinity. Pittsburgh has the cap space to pay it. Now it’s just a question of whether or not they want to. If not, there’s second-round pick George Pickens waiting in the wings but Johnson is a proven, talented receiver. It’ll be the biggest decision Khan will have to make as the team’s new GM.