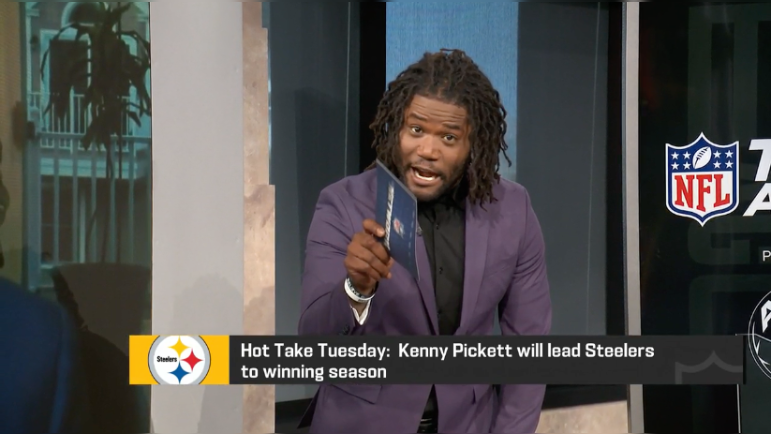 If you weren’t on the hype train regarding Pittsburgh Steelers rookie quarterback Kenny Pickett before Saturday’s preseason opener against the Seattle Seahawks, you may have missed your window to board. That train is dashing down the tracks at a high rate of speed following Pickett’s burst onto the scene in his NFL debut.

In the win over the Seahawks, Pickett threw for 95 yards and two touchdowns — including the game-winner with three seconds left — and had the city and the fanbase buzzing after what transpired on the field at Acrisure Stadium Saturday night.

Back at training camp, Pickett was elevated into getting work with the second stringers Monday and Tuesday during practice at Saint Vincent College in Latrobe, which has many believing he could really find himself in the quarterback competition for the starting job now.

That led to NFL Network’s Michael Robinson, a former fullback in the NFL, making a “bold” prediction Tuesday night on NFL Total Access, stating that he believes Pickett will lead the Steelers to a winning record in 2022 once he’s in the lineup.

Sometimes I think the expectations regarding what is or is not a “bold” prediction need to be revisited. Anyway, Robinson — who provided analysis for the game Saturday for NFL Network — laid it out for the viewers Tuesday night.

“That whole stadium erupted when he got in the game,” Robinson said, according to video via NFL.com. “I think we’re going to see him for more than half of the season. We all know, Mike Tomlin, he doesn’t have losing seasons. I think he will continue that trend. I’m telling you, Kenny Pickett to George Pickens…let’s get it.”

So, Robinson doesn’t actually provide any insight into why he believes that with Pickett, other than what he saw Saturday inside the stadium. That’s fair and all, but predicting a winning record as a rookie starting quarterback based on two quarters against second- and third-stringers on a bad team is a bit of a stretch.

Still, there is plenty to like with Pickett. The moment wasn’t too big for him. He looked calm, cool and collected throughout his appearance Saturday night and really took control of the offense overall, including on the game-winning drive in two-minute action. Though he’s unlikely to start the season as the starting quarterback with Mitch Trubisky and Mason Rudolph on the roster, he’s certainly making a push for the job and is impressing coaches, teammates and media members.

Pickett will likely get playing time in 2022, and could take over as the starter around the midway point of the season, depending on how Trubisky is performing, or his health. The Steelers drafted Pickett to be the intended future franchise quarterback, and they’re going to hand him the reins eventually. When that is is still to be determined. It’ll happen at some point in 2022, though.

Maybe he will lead the Steelers to a winning record right away. Who knows? He’d be stepping into a strong situation overall with plenty of offensive playmakers and a great defense. He wouldn’t have to do too much, one would think, as a rookie.

The hype is building though and is getting a bit out of control, if we’re being honest. Now, we’ll see how he responds in Week 2 of the preseason on the road against the Jacksonville Jaguars.