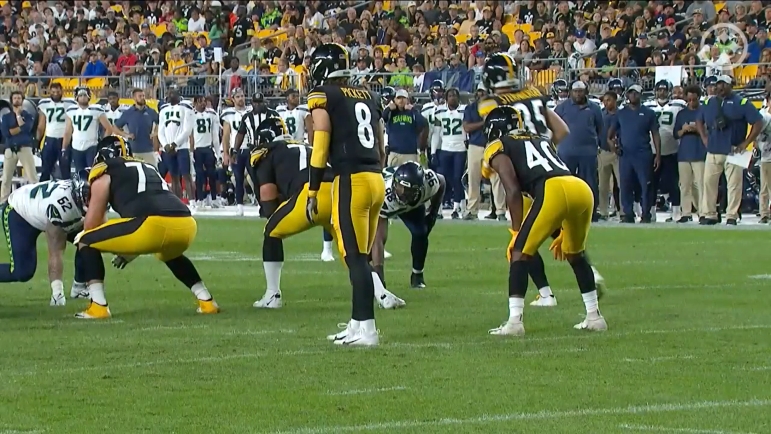 NFL.com’s Daniel Jeremiah wrote about the best- and worst-case scenarios for notable NFL offensive rookies, which included two Steelers. Jeremiah profiled both Kenny Pickett and George Pickens’ best-case and worst-case seasons, as well as projected stats for both.

Jeremiah believes Pickett’s best-case scenario would be winning the starting job early in the season.

“Pickett wins the starting job early in the season and efficiently operates a balanced offense. He uses his athleticism to overcome shaky offensive line play and helps the Steelers return to the postseason,” he wrote.

If Pickett can win the job early and lead the Steelers to the playoffs, that’s certainly a win. As far as how early Pickett takes over in a best-case sort of outcome, Week 4 would be my best guess because it gives Mitch Trubisky three games to show what he’s got, and then will give Pickett a matchup against the New York Jets to begin his NFL career. From what Pickett’s showed so far, I think his athleticism could definitely be an asset, but the offensive line has been so bad that I’m not sure how much he can combat it. Regardless, I think this is realistic to expect for a best-case scenario.

Pickett’s worst-case scenario would involve not playing at all.

“If Mitchell Trubisky wins the job entering the season and plays well, 2022 could end up being a redshirt year for Pickett. That wouldn’t be a terrible thing because it would mean the offense is performing and it would provide the Steelers with another offseason to upgrade the O-line before thrusting Pickett into the mix.”

I don’t really think this would be the worst case. I think Pickett eventually taking over the starting job and struggling so much the Steelers turn back to Mitch Trubisky or Mason Rudolph would be more of a worst-case for him than getting a year to learn and acclimate to the NFL.

Before the preseason started and Pickett showed what he was capable of, I’d argue this would’ve been the ideal scenario for the rookie quarterback and for the Steelers. Obviously, he’s going to want to play, but spending a year sitting behind a veteran quarterback and learning really isn’t the worst thing in the world. If Trubisky plays well and stays hot throughout the year, then this is a scenario that could very well come to fruition.

Jeremiah’s projected stats for Pickett are 960 passing yards, seven touchdowns and three interceptions in four starts. I’m assuming this projection would involve either injuries or the Steelers being out of the playoff picture by Week 15, which obviously wouldn’t be ideal. However, if Pickett was able to put those numbers up in four starts, I don’t think anyone would really be complaining. It’ll be interesting to see how Pickett is handled and how short of a leash Trubisky has when the season gets underway.

For Pickens, Jeremiah’s best-case scenario is one that would make a lot of Steelers fans happy.

“Pickens lives up to the hype. I’ve made some comments about folks at Georgia comparing him to former Bulldog A.J. Green. Green began his NFL career with five straight 1,000-yard seasons. I won’t be shocked if Pickens joins the 1,000-yard club as a rookie. He has that type of upside.”

The biggest difference between Green and Pickens is that Pickens was drafted No. 52 overall, 50 slots later than Green at No. 2 overall. I think Pickens is going to be really, really good. I would say 1,000 yards would be close to the upper end of his rookie season projections, but depending on how the offense looks, it wouldn’t really shock me if he got that close. He seems to have quickly earned the trust of the quarterbacks, and his insane body control is going to be an asset in the NFL. Pickens is the player I’m most excited to watch this season.

His worst-case scenario isn’t as promising, but is also a little bit unlikely.

“There are a lot of mouths to feed in the Steelers’ offense, starting with Najee Harris and Diontae Johnson. Pickens provides some splash plays, but the lack of targets impacts his overall production.”

Jeremiah does too, as his projections for Pickens are promising: 65 catches, 845 yards, and six touchdowns.

It’s a new era in Pittsburgh, and this season is going to be fun to watch play out. There are a lot of new faces, especially on offense, but this year is going to reveal a lot about Pittsburgh’s future. Week 1 is less than a month away, and I can’t wait.