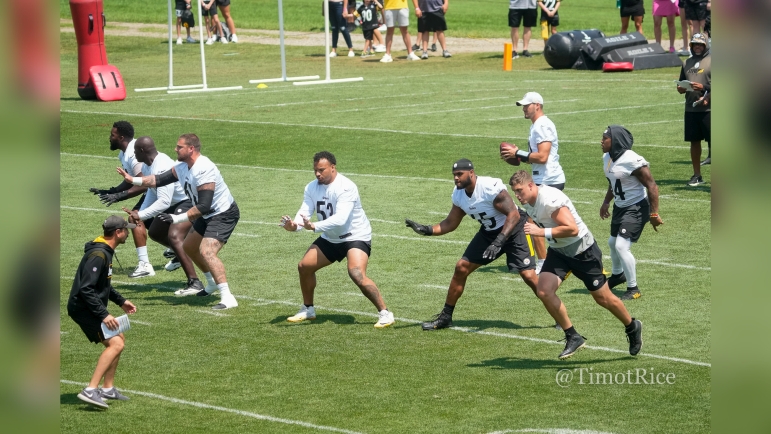 A lot of the conversation about the Pittsburgh Steelers’ offense this season has surrounded the subject of what it would look like without Ben Roethlisberger under center. Even though the team retains the same offensive coordinator from last season in Matt Canada, there seems to be a belief that there will still be some notable differences based on the skillsets of those under center.

The number one on the quarterback depth chart (as confirmed earlier today), Mitch Trubisky, talked a little bit about that with Pat Kirwan, Jim Miller, and Paul Alexander during a spot on SiriusXM Radio’s Movin’ the Chains program, regarding the direction the offense is heading in terms of installation.

“We got some creative things going with the offense, and it’ll continue to get more opened up once we start to get our bread and butter and all our plays down”, he told his hosts, “but definitely some move the pockets, use my athleticism, get me out in open space, and let these playmakers get open. We’ve got a lot of talented guys. We’ve just got to spread the ball around and do what comes natural and what’s been working for us”.

Now, head coach Mike Tomlin has been beating the drum of quarterback mobility for several years now, long before the team was ever really considering drafting a future franchise quarterback, so it’s no surprise that that’s something they prioritized this offseason.

Trubisky was an athletic quarterback prospect coming out of college, and his ability to move around in the pocket, and even scramble on occasion, will be one of the assets that he brings to the table. Rookie first-round draft pick Kenny Pickett is much the same. While Mason Rudolph is not quite in that tier of athleticism, he certainly can move around a bit better than Roethlisberger could at the end of his career.

Quarterback mobility is a friend particularly to an offense with a suspect offensive line, and the Steelers’ offensive line is certainly that until proven otherwise, even if they added two starters via free agency in James Daniels and Mason Cole.

One thing we know to expect is a continuation of the usage of jet sweeps with the wide receivers, as the offense made no secret of working that during practices recently. We should also expect the wide receivers to have more flexibility in their roles, and there has been talk of more two-tight end sets, as well.

The Steelers will be in a stadium for the first time since the end of last season next week for their debut preseason game, at which point we should get our first taste, albeit merely a sampler, of what Canada plans to do. It will be quite vanilla, of course, but it will be our first look at the post-Roethlisberger offense.