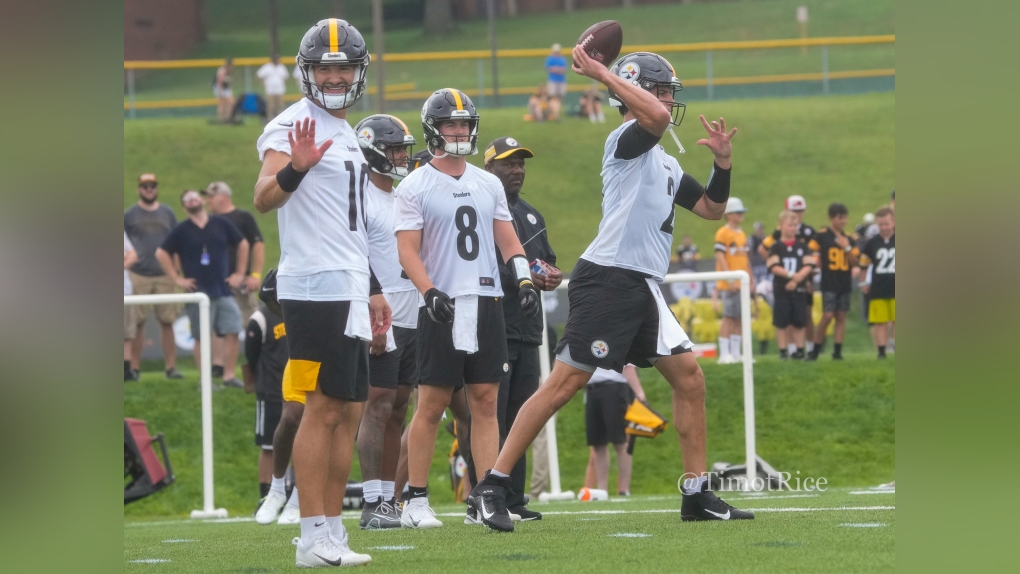 The Pittsburgh Steelers were able to pull out a 32-25 win over the Seattle Seahawks in their preseason opener that saw rookie quarterback Kenny Pickett lead the team on a game-winning drive. Mitch Trubisky, who opened the game and led the team on a scoring drive to start things off, talked about watching Pickett lead the team in the second half in his press conference after the game, via the team’s YouTube channel.

“It was awesome. I told him before the game, you always remember your first pre-season game. They all kind of blend together after that, but I told him, it’s gonna be a memorable one tonight and, we finished strong as a group and you gotta be happy for him and the whole team. So it was awesome,” Trubisky said.

Pickett wasn’t totally mistake-free, as he took a few bad sacks, but overall it was a really promising debut from the rookie. He went 13-15 for 95 yards and two touchdowns, including a 24-yard score to Tyler Vaughns with three seconds left to give Pittsburgh the win. He also showed off his mobility, running three times for 16 yards. Pickett looked to be in control of the offense for the majority of the second half, and while he made some safer throws at times, he was accurate and made some nice plays.

For a guy like Trubisky who has been in Pickett’s shoes before, I’m sure it was fun for him to watch a first-round rookie go out and play as well as he did. On the other hand, though, the two are still in a quarterback competition with Mason Rudolph, but Trubisky has shown to be a good leader and I’m sure he was rooting for his fellow quarterback.

Reacting too much after one preseason game is never a good thing, but Pickett did look the part of a future starting quarterback on Saturday. Obviously, there were lapses, and Trubisky looked great and he’d still be the guy I would start this year. Even though Pickett was primarily going up against backups, he was also playing with lower-string guys and he still managed to make plays, move the ball down the field and find the end zone.

Truthfully, I didn’t expect a lot out of Pickett, but he was comfortable out there and the crowd loved seeing him play. The Acrisure Stadium crowd was chanting his name when he came on the field and after the team got the ball back following Mark Robinson’s strip-sack of Drew Lock that set up the game-winning drive.

Pickett and the Steelers next test will be in Jacksonville next Saturday when the team takes on the Jaguars and the 2021 first overall pick in Trevor Lawrence on August 20.