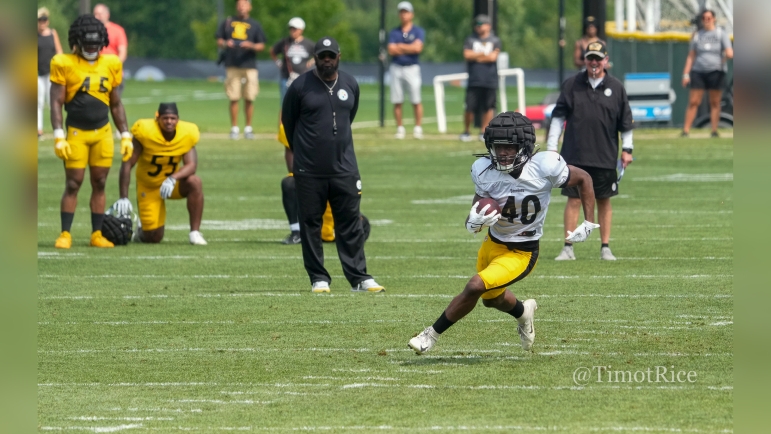 With star second-year running back Najee Harris sideline in recent days due to a foot injury suffered during an 11-on-11 team session late last week, an opportunity for additional reps and chances to show the coaching staff what they’re made of has been presented to a young, inexperienced group of running backs behind the workhorse Harris.

So far, guys like Benny Snell Jr., Anthony McFarland, Jaylen Warren and Mataeo Durant have stepped up and seized upon those opportunities in training camp at Saint Vincent College in Latrobe, as has recent signee Master Teague III. Though the depth behind Harris is a bit concerning, considering his importance to the Steelers’ success and the heavy workload he handles, Steelers head coach Mike Tomlin doesn’t seem too worried ahead of Saturday’s preseason opener against the Seattle Seahawks at Acrisure Stadium at 7 p.m.

Speaking with reporters Thursday from the Fred Rogers Institute at Saint Vincent College prior to practice, Tomlin stated that he likes what he’s seen from the running back depth chart behind Harris, and is looking forward to seeing how the young players perform in a stadium environment.

Warren is a bowling bowl who can run you over. Play has been a little up and down but he's been competitive, bounced back from low moments, and has been healthy and available. All things you want to see.

“I like it. I like what they’ve displayed out here,” Tomlin said to reporters Thursday, according to video via the Steelers official YouTube page. “I’m really interested in watching them in-stadium and obviously, ball security is a component of that position that is non-negotiable. And so you get those guys in the stadium and you get a chance to see their second effort and the things that you do in game-like circumstance, they need to do those things while safeguarding the football.”

Warren has really raised some eyebrows in recent days, showing off his power between the tackles as a runner, earning some praise from Tomlin and fellow teammates. Same for Snell, who earned distinct praise from Tomlin last week for his conditioning and attention to details in training camp while taking on a larger role with Harris out.

Though Tomlin feels good about the depth at the moment and likes what the group has displayed in training camp to date, there’s something to be said for the performance in a stadium, as he pointed out, which will determine quite a bit at the position moving forward, starting on Saturday against the Seahawks.

Harris likely won’t see much time, if any, so it’s another big opportunity for not only Snell, but McFarland, Teague, Durant and Warren to try and establish themselves right away and push for a roster spot, making the coaching staff feel more and more comfortable with the depth and talent behind Harris.