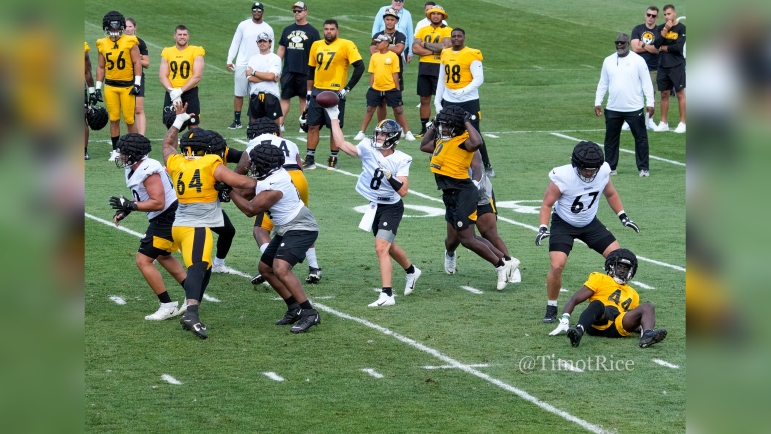 Pittsburgh Steelers rookie quarterback Kenny Pickett took his first rep during the ‘seven shots’ goalline drill of training camp during Saturday’s practice session, and had begun to be given more significant reps. After the first three practices, many had begun to wonder whether or not he was being put through the process of having to earn better reps.

Humans have a natural tendency to seek answers. When you have an incomplete dataset, your impulse is to draw conclusions involving assumptions based on patterns. This is why we (the ‘we’ in the general sense) are prone to overreact to the early days of training camp, for example.

Head coach Mike Tomlin was even asked after Saturday’s practice about Pickett’s work on the day, and whether or not the opportunities to see better snaps and work in situational drills was the product of anything that he had earned.

“Reps are gonna come, not only for him, but for everyone”, the veteran head coach said, which kind of shot down the notion that he was given that rep because of the quality of body of work, rather than it simply being the decision to give it to him and seeing what it looks like. “We’re at the very early stages of this. Everyone’s gonna get an opportunity to show their capabilities, for sure”.

It is very early indeed, of course, with the first practice in pads still on the horizon, and the first preseason game still a way off. There is only so much we can say for sure about what we see now that will definitely still be true a month from now.

But what we can be confident of is that patterns that we think we see are going to be altered, as a design feature of the process. Adapting to change is something that Tomlin wants to see, getting a chance to examine how players respond to unfamiliar circumstances.

As far as Pickett goes, it’s fair to say that he is off to a bit of a rocky start, having successfully completed a handful of passes to opposing defenders already through the first four practices of training camp, but that’s just the very beginning of his story.

Overreaction should not be rewarded, yet it often is. It goes back to that human impulse to satisfy questions, to answer the unknowns, and when you can’t know something, you have to start making assumptions, like scratching an itch for relief.

We’d like to be your back scratcher so that you don’t have to feel the need to scratch yourself wondering about what’s going on. That doesn’t mean that we’re going to have any of the answers that nobody else has, but we’ll at least try to keep our composure and maintain perspective. Training camp is a long process. There’s very little to be said right now that will matter next month.