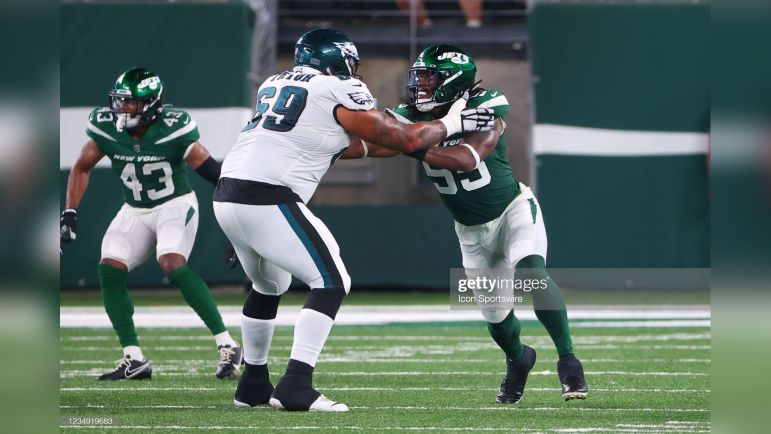 In his press conference on Thursday in preparation for the Steelers opening preseason game against Seattle, Mike Tomlin spoke about the team’s new waiver addition, EDGE Hamilcar Rashed Jr., via the team’s YouTube channel.

“I remember when he came out in the draft, he was a guy that had our attention. He’s an outside linebacker body type. I think he had 14 sacks his junior year at Oregon State, and that captured our attention. But it’s a get-to-know process and we’ll be excited about giving him an opportunity to show himself to us. He’s a guy that’s not a rookie. He’s been in this thing so I’m hopeful that he can learn fast enough to be a contributor in some form of fashion, Saturday.”

Rashed is certainly an interesting prospect. While he only played in one game for the Jets last year after signing with the team as an undrafted free agent, he did register 14 sacks his junior year at Oregon State. He also had 62 tackles, with 22.5 of those resulting in a loss of yards, a tally that led the nation. He returned to OSU for his senior year, but the COVID-shortened year impacted him and his numbers went down, as he registered just 23 total tackles and two sacks his senior year.

The fact Rashed chose to play that season instead of opting out as so many NFL draft prospects did speaks to his work ethic and will to win. He looked to be a potential first-round pick following his junior year, but the struggles his senior year led to him going undrafted. The only game he played last year was Week 10 against the Bills, where he had one tackle and was targeted once in the air, allowing a three-yard reception.

It’s no secret the Steelers don’t have the most intriguing depth at outside linebacker with Derrek Tuszka and Genard Avery currently behind T.J. Watt and Alex Highsmith. It’s clear Rashed has the ability to potentially be a good player in the league, and it wouldn’t be surprising for him to stick on Pittsburgh’s practice squad or potentially compete with Tuszka or Avery for a backup job on the opening 53-man roster.

I think Rashed was a really solid, underrated pickup. He has the pedigree the Steelers love as a guy who performed really well in college in a Power Five conference, and if he didn’t play his senior year, he’s someone that could’ve been a late Day 1 or Day 2 selection. Having a year of NFL experience (albeit mostly on the practice squad) under his belt should help him get up to speed quickly and help him start to compete for a role. I’m interested to see if he plays on Saturday and what sort of impact he could make.

It’s clear Pittsburgh is looking to improve their depth at OLB and potentially find a diamond in the rough with the recent additions of Rashed and Ron’Dell Carter. If the two of them perform well on Saturday and are able to put some good days together in training camp, Tuszka could find himself very much on the roster bubble. The backup OLB position battle is going to be a fun one to watch these next few weeks, and it wouldn’t shock me if Rashed is able to put himself in a position to make an impact.