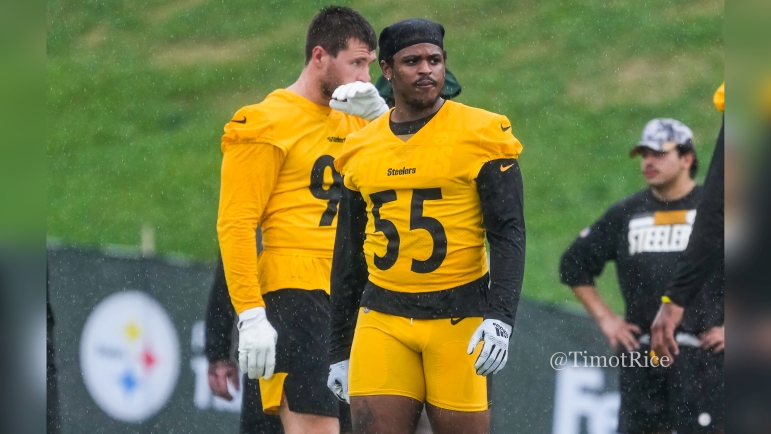 It hasn’t been the type of training camp, on and off the field, that many were hoping for with fourth-year Pittsburgh Steelers linebacker Devin Bush.

Coming off of a downright disastrous 2021 season in his return from an ACL injury, Bush was looked upon to bounce back, solidify himself within the starting position next to Myles Jack in the Steelers’ 3-4 defense, and really show he could get close to returning to the high level of play he showed as a rookie.

Instead, Bush has found himself mired in a position battle with Robert Spillane, had an ugly rep against the Seattle Seahawks in the preseason opener at Acrisure Stadium in the run game, and then had a tone-deaf remark to the media earlier this week, stating that he’s still going to be in the NFL after this season, his final under contract with the Steelers.

Still, belief in Bush remains internally with head coach Mike Tomlin and senior defensive assistant/LB coach Brian Flores, who both praised the fourth-year linebacker in recent days. Sitting down with Steelers.com’s Bob Labriola prior to Saturday night’s preseason matchup with the Jacksonville Jaguars on the road, Tomlin stated that he’s excited to see Bush try and answer some questions about his play this season, now that he’s had a full offseason of training with no rehab, and is further removed from the injury.

“…I think he’s ready to move beyond that and be what he’s capable of being. I know that has been the nature of our discussions, and so he’s going through the process,” Tomlin said to Labriola, according to Steelers.com. “He’s competing, he’s making some plays, and I’m excited about him answering some of those questions. We get challenged in this business at this level. This is just our life, and he’s very cognizant of it. He’s a guy who was born into this game, his dad played the professional game.

“He has a level of maturity in terms of understanding that component of it, and he realizes that his play is going to do the talking, and I appreciate that mentality.”

Not great at all for Bush, but my favorite thing here is everyone casually overlooking Delontae Scott completely getting wrecked in front of Bush, leading to the massive cutback lane. Gap integrity. Bush had it. Scott didn’t. But all the focus on Bush here. I get it. https://t.co/HmpxVKIgBy

So far in training camp and in the preseason, his game hasn’t done much talking. Make no mistake: he’s had some really good days at Saint Vincent College in Latrobe, and some quiet days. He was rather quiet in the preseason opener, not recording a single tackle or assisted tackle, though he showed flashes of burst sideline to sideline, even if they were rare in the 15 snaps he played.

It’s all a work in progress though, and the Steelers understand that even if many in the media and the fanbase don’t — or won’t — understand that with Bush. Tomlin made it clear though: Bush is 100% healthy. He’s just trying to find his game again.

“I think he could be described as 100 percent healthy, and so the things that are the challenges for him are that confidence, that rhythm that comes when you’re on top of your game, and he’s working to find that,” Tomlin stated to Labriola, according to Steelers.com.

Bush will have to find his confidence and his game in a hurry, or he could find it difficult to get onto the field in 2022, or stay on the field for longer than a few plays at a time. He’s fallen pretty far since being the No. 10 overall pick in the 2019 NFL Draft, but that doesn’t mean he can’t get back off the mat and reach the level he once played at in the black and gold.