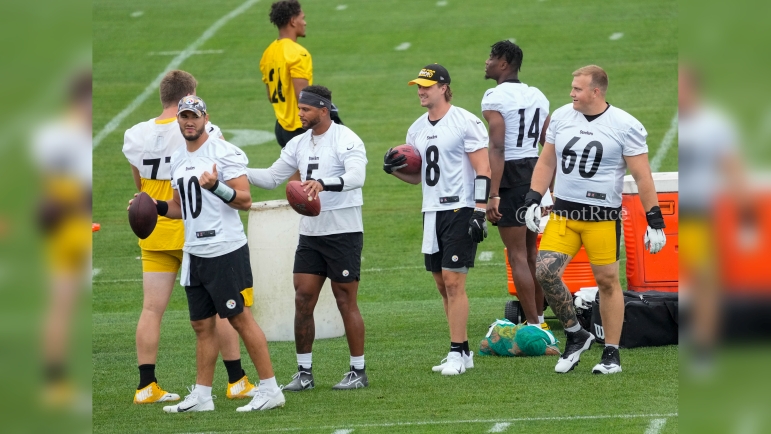 In the first training camp without a penciled-in starting quarterback for the Pittsburgh Steelers in more than two decades, there is currently a three-way race for the job in 2022. Steelers’ second-year quarterbacks coach Mike Sullivan delved into each quarterback’s strengths in an interview with Bob Pompeani of KDKA Sports.

“I think you do. There’s a maturity,” Sullivan answered when asked whether quarterback Mitchell Trubisky’s experience has helped him in practice. “I mean, he took Chicago to the playoffs two times in his career. He’s played a lot of football. This is actually his fourth system though in his pro career. He had two in Chicago, one in Buffalo and now here. Yet he’s shown the ability to adapt, really getting a feel for his role relationships with the players. I’ve been excited to see him come out more of his shell and be that type of fiery leader that you want. So it’s certainly been an advantage.”

While Trubisky indeed led the Bears’ to two playoff runs in his four-year career, his play was widely regarded as sub-par. While his play was by no means abysmal, it left a lot to be desired from a second overall pick. This is especially evident given that he was a backup the following season. In his one-year stint with the Buffalo Bills, Trubisky was well-known to have earned the respect of many of his peers and coaches, notably coach Sean McDermott, despite playing only 33 snaps. Trubisky’s ability to adapt to the Steelers’ system will be put to its truest test in this training camp, and earning the approval of his quarterback coach is certainly a good sign.

Trubisky’s offensive staff in Chicago may not have gotten the most out of his talents, especially evident by the fact that other Bears quarterbacks such as Justin Fields, Nick Foles, and Andy Dalton had similar if not greater struggles. Regardless, it’s only natural to assume that Trubisky’s tenure with the Bears hindered his confidence and leadership, and it is an excellent sign that he has broken out of his shell to be a fiery leader. After all, Trubisky entered this training camp with the pressure of battling the team’s first-round pick Kenny Pickett and five-year Steeler Mason Rudolph. If nothing else, this test certainly appears to have molded Trubisky into a better leader.

“Kenny, as I mentioned, his maturity is one that’s been very impressive,” Sullivan said regarding the rookie first-round pick’s maturity. “And by that, I mean, he doesn’t ever get too high, doesn’t get too low. He’s got a tremendous work ethic, and he’s able to process well, he can take things understanding in the meeting and then take it to the field. And of course, he’s making some rookie mistakes. But they all do, but really pleased with his progression thus far.”

Maturity is an underrated aspect for a rookie quarterback. As evident in former Arizona Cardinals’ first-round pick Josh Rosen’s career after making his infamous “nine mistakes ahead of me” comment, lack thereof can be a huge detriment. Pickett’s work ethic was displayed in the Steelers’ home stadium, as his impressive one-year jump in play from his fourth to fifth year at Pitt galvanized his draft status to the first round. As Sullivan mentioned, it is all but expected for Pickett to struggle as a rookie that’s competing for reps, but his maturity and work ethic may just put him in the team’s desired career trajectory.

Having coached quarterbacks since 2010, Sullivan has extensive experience in quarterback play, coaching former New York Giants quarterback Eli Manning in one of his Super Bowl winning seasons. As such, his comments on Trubisky and Pickett are encouraging. This Saturday’s game against the Seattle Seahawks will provide both quarterbacks an opportunity to materialize their maturity and leadership into meaningful quality play.