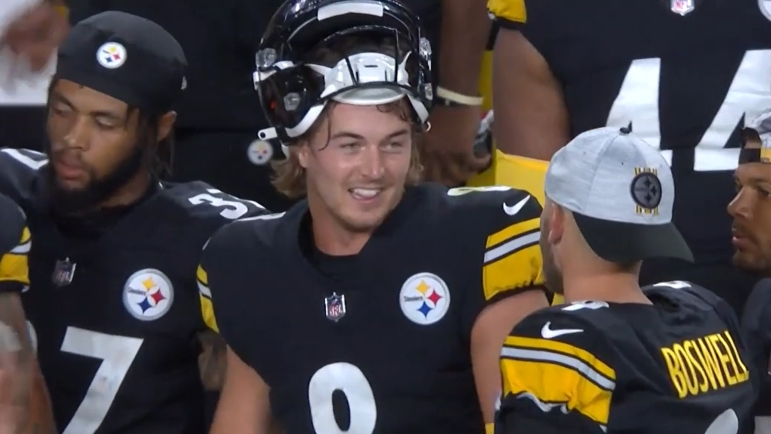 The Pittsburgh Steelers have a business, and their business is winning football games. In no small part due to stability at the most crucial position on the field, they have managed to do that will impressive relative consistency for the better part of the past couple of decades.

But they found themselves at an impasse under center with Ben Roethlisberger retiring. They believed that Kenny Pickett would give them the best chance to replace what they were losing. But that perhaps goes both on and off the field, Mike Florio ponders for Pro Football Talk.

“Look, I know the Steelers aspire to win every Super Bowl, and for them, it’s not just hollow talk to fill the stadium”, he said as a preface. “They really want to win the Super Bowl every single year. They are gonna put the best possible players on the field”.

“But at the same time, they have seen a mild dip in attendance. They have seen a dip in local TV ratings”, which is documented. “They need a little excitement for the franchise, and I think that’s one of the reasons why they drafted Kenny Pickett”.

He talked about how they had the opportunity to draft the local kid, Pitt product Dan Marino, back in 1983, and how that ended up being a decision that they would never live down. That went for both the potential success they would have had on the field and the sheer amount of attention he would have attracted. Now, perhaps, they have that in Pickett, who, while not an area native, considers Pittsburgh his second home and knows his way around the UPMC Rooney Sports Complex.

“This is a way to really excite and energize. If it’s close, how do you not put Pickett out there?”, Florio said—and then offered one reason why. “It’s easier to go from the veteran to the rookie. You can’t go from the rookie to the veteran. They can’t have another Terry Bradshaw gets benched for Terry Hanratty, Joe Gilliam, or whoever else they happen to have around”.

Terry Hanratty was the Steelers’ 30th-overall pick in 1969, the year before they drafted Bradshaw first overall. He started five games as a rookie, then six in 1970, though he did not open the season as the starter. Bradshaw did, and then he got benched. And later, he would get benched in favor of Joe Gilliam too. It would take years for him to establish himself, for a variety of reasons we don’t need to get into.

“Once you go with Kenny Pickett, he’s your guy”, Florio said, and I think he’s right. If you start Pickett and then you get to the point where you actually have to pull him, then you have a problem on your hands. People aren’t going to be happy about that. Of course, you don’t make football decisions based on how the crowd is going to react, especially if you’re a stable franchise (including economically) like the Steelers. But it’s just something you want to avoid doing if at all possible.