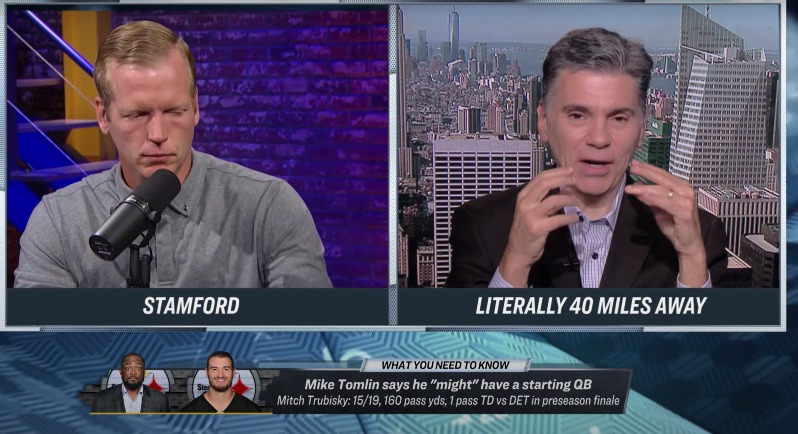 After Simms said he would start Trubisky for the first few weeks and re-evaluate due to how poor Pittsburgh’s offensive line is and their schedule to open the season, Florio countered with the idea that starting Pickett would bring a lot more excitement in Pittsburgh.

Florio’s second point there is the most important to take away-winning is the most important thing, and if the Steelers believe Pickett is the quarterback to put them in the best position to win, he will be the guy. Right now, I think they believe it’s Trubisky, and it’s likely going to be Trubisky who starts Week 1. Given the fanbase’s affinity for Pickett due to his days at the University of Pittsburgh, sure, the majority might want Pickett to start. But if Pickett does start and he struggles the first few weeks, those “Kenny, Kenny” chants might turn to boos.

Simms said that the fanbase clamoring for Pickett could further incentivize the Steelers to pull the plug on Trubisky earlier in the season if the offense is struggling, which may be the case. However, the way Pickett played in the preseason would be more of a reason for them to do so. Pickett looked the part of an NFL quarterback, so if Trubisky struggles through the first few weeks, the Steelers may turn to Pickett to see if he can be that guy.

The way Pittsburgh’s schedule shapes up, Week 4 against the Jets looks like that first opportunity where we might see a quarterback change if the offense is struggling. The fact of the matter is that if the team is winning games with Trubisky under center, not many people are going to be calling for Pickett to take over. Florio freely admitted that Mike Tomlin isn’t going to care what the fans think, and while he is right that Pickett might be the more exciting option right now, it doesn’t matter if he’s not the best option right now. If the team feels that Trubisky is the best option right now, he’s going to start Week 1.

Kenny Pickett jerseys will continue to be among the best selling in the league, but ultimately Pittsburgh is going with who they think will win them football games right off the bat, and there’s a chance Pickett sees some time as the starter this season. As it stands right now though, he’s probably looking at the backup job to start the season, and I think the Steelers are comfortable with that.