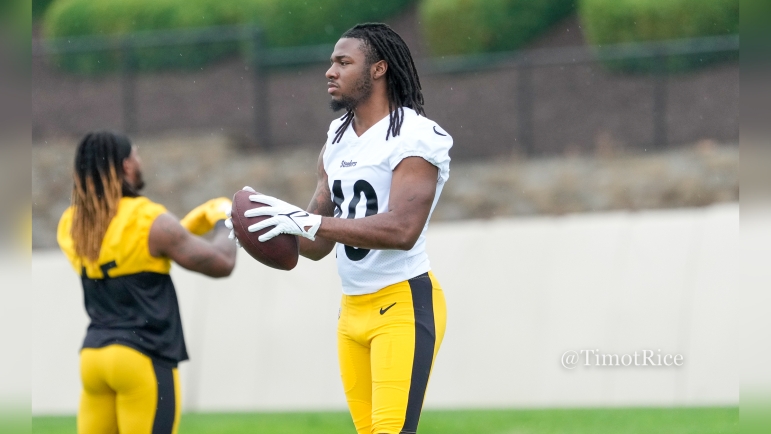 We are now one day away from the preseason opener against the Seattle Seahawks in the new Acrisure Stadium. We know that Seattle will be starting Geno Smith at quarterback, and the Steelers, Mitch Trubisky, but other than that, not a whole lot has been revealed.

Key members of the team like T.J. Watt, Cam Heyward or Najee Harris will likely be in bubble wrap to ensure their safety for the regular season, especially Harris, who’s widely expected to take on a workhorse role yet again after leading the league in touches last year with 381.

The preseason is the time where depth chart battles are often won and lost, and one of the most intriguing ones is at the backup running back spot, which the team ignored in this past draft.

After the draft, the team did sign two UDFA’s including Jaylen Warren and Mataeo Durant, the latter of whom the team thought highly enough of to hand the largest contract ever given to an undrafted RB. It’s safe to say we can count former Steelers tackle Max Starks among the fanbase pulling for Durant, based on comments he made Thursday on Training Camp Live via YouTube.

“Mataeo Durant is a taller, leaner back, so he excels in the pass game,” Starks said, according to video via the Steelers’ official YouTube page.  “He has some great route running for a running back. He’s a little bit more slender so he has a little bit of the short-area quicks. He can get thin in a lot of situations and kind of split through some of the smaller holes that are provided to him in the run game.”

He’s an explosive runner for his size, at 6-foot-1 and 195 pounds, and proved this by running his 40 in 4.38 at his Pro Day. The first-team All-ACC selection in ‘21 posted a single-season school record 1,241 yards rushing last year, and he has ten 100-yard rushing performances to his name. One thing Starks did say Durant needs to work on his lowering his center of gravity, and although he is a taller back, it’s easy for someone who’s 6-foot-8 like Starks to tell someone else he “runs a little high.”

“I like him to be a little bit lower to the ground. But he has some breakaway speed and some good vision,” Starks added.

It’ll be interesting to see come Saturday evening how the carries are split up between the backs. Benny Snell Jr.’s job as the direct backup seems to be safe, due to his special teams acumen, but behind that, it’s anybody’s guess. Anthony McFarland seems to finally be healthy, and as a previous fourth-round pick of the team in ’20, look for the coaching staff to give him every opportunity to succeed. However, we cannot rule out Durant, as his explosion would provide a great change of pace to the ground and pound styles that Harris and Snell bring to the table.