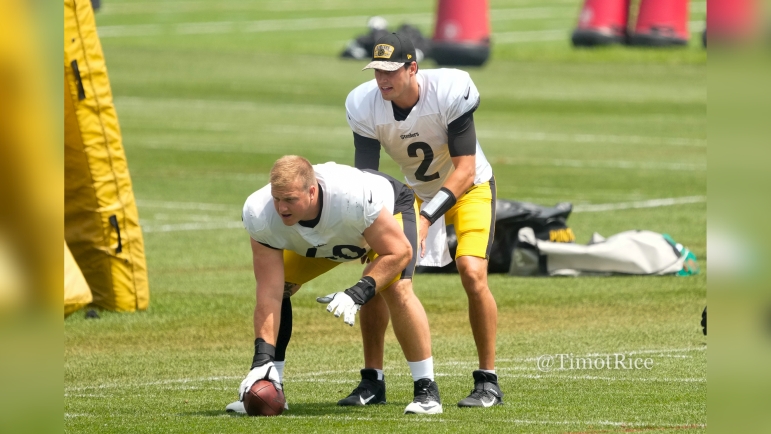 It’s safe to say Mason Rudolph won’t be the Pittsburgh Steelers’ starter come Week 1. Everything else is on the table. He could be the team’s #2 quarterback, its #3, or even playing football in another city. While still speculation, trade rumors have swirled about Rudolph over the past week. Speaking to reporters before Thursday’s final camp practice, Rudolph says he pays no mind to those storylines.

“Those are all scenarios that I have no control over,” he said about trade speculation as tweeted out by The Trib’s Chris Adamski. “That’s not what my focus is on right now. My focus is on going down and putting the finishing touches on this week today with practice and then tomorrow’s walkthrough and then getting to Jacksonville.”

Rudolph has had a nice camp and over the first two weeks, and was the team’s best quarterback of the summer. Through little fault of his own, his stock has faded down the stretch with Mitch Trubisky cementing himself into the starter’s spot while Kenny Pickett has ascended with improved practices and a strong outing in his NFL debut over the weekend. Pickett’s run as the #2 quarterback all week ahead of Rudolph and will be the first to replace Trubisky in this weekend’s game against Jacksonville.

As things stand, Rudolph could be the team’s inactive, #3 quarterback on gamedays. A relatively expensive third-stringer in the last year of his contract, a trade would make some level of sense. Get something in return for a player not dressing who will be playing elsewhere in 2023. Rudolph’s unlikely to hold a ton of value, but a late Day 3 pick is possible for a QB-needy team, an organization that loses a key backup due to injury during the preseason. We’ve connected the dots to the Los Angeles Rams given Rudolph’s close ties to assistant QB Coach Zac Robinson.

Publicly, the Steelers have tamped down the idea of a trade. Appearing on The Pat McAfee Show earlier this week, GM Omar Khan said he’d be “surprised” if a trade were to take place. Of course, he’d be smart to posture and make it sound like he’s closed for business, compelling teams to put more serious and aggressive offers if they come calling. Trading Rudolph isn’t out of the question, but it’s likely Pittsburgh won’t be actively shopping him. Other teams will have to ring the Steelers and if they present an offer that’s too good to pass up, Pittsburgh may have themselves a deal, just as they did in 2019 when they shipped Josh Dobbs to Jacksonville for a fifth-round pick. The risk, however, is a repeat of the 2019 season. Trading away a veteran quarterback only to lose your starter the next week, suddenly putting the team in a very precarious situation at the game’s most important position.