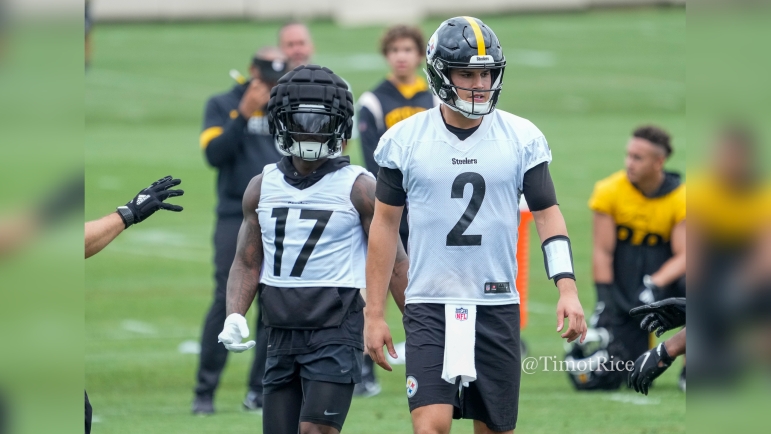 So far in training camp for the Pittsburgh Steelers at Saint Vincent College in Latrobe, fifth-year quarterback Mason Rudolph is making a strong push for the starting quarterback job in the post-Ben Roethlisberger era. Entering the second full week of padded practices, Rudolph has stood out from a numbers standpoint, compiled by Steelers Depot’s own Alex Kozora, and from an eye test perspective.

Rudolph is pushing the football down the field more often than rookie Kenny Pickett and veteran Mitch Trubisky in training camp, is showing more downfield accuracy and has a better overall feel for the offense as a whole under second-year offensive coordinator Matt Canada, which shouldn’t come as much of a surprise since Rudolph spent the entire 2021 season learning the scheme behind Roethlisberger.

Now, with the lights coming on and preseason action right around the corner, Rudolph knows that the true tests are coming, regardless of how or when he sees his snaps in the game, starting with the preseason opener Saturday at Acrisure Stadium against the Seattle Seahawks. It’s not Rudolph’s first rodeo under center for the Steelers in the preseason, but he is excited to get a chance to not only prove himself, but display his leadership in leading a young offense onto the field in live action, Rudolph said to the Pittsburgh Tribune-Review’s Joe Rutter in Latrobe Monday.

“I think you’re always trying to prove yourself,” Rudolph said to Rutter, according to original reporting from the Tribune-Review. “Every chance you get, you want to prove it. It’s one thing to do it in practice. It’s another to do it in a stadium. We have a lot of young guys, and I’m excited to lead those guys and make them feel comfortable out there when the bullets are flying.”

That all changes on Saturday when the defenders can hit him, harass him, and really get after him in a real game.

With his comfort in the system, his overall understanding of it, and his experience as a starting quarterback in the NFL with 10 career starts under his belt, Rudolph has a chance to really make a mark and state his case for the starting job on Saturday, even if he is the second quarterback on the field behind Trubisky, who is expected to get the start.

He’s been steady on the field in training camp from a leadership and production standpoint. Now it’s time to do that when it counts.