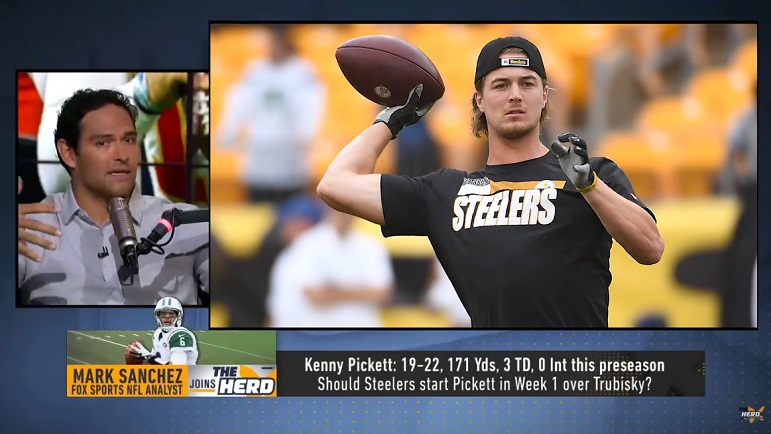 Not every franchise that drafts a quarterback in the first round has the same environment or anticipated role for him. Some teams hope to build a team around a quarterback, while others take a different approach. Pittsburgh Steelers rookie quarterback Kenny Pickett steps into a presumably win-now defensive team, which will have bearing on his initial role. Former New York Jets quarterback Mark Sanchez offered Pickett advice in a recent interview, as he stepped into a similar situation as a rookie.

“Most importantly though, for a young guy, is staying within the system,” Sanchez said on The Herd With Colin Cowherd Friday. “Staying within yourself. There’s going to be time to make the big plays. Stay in there, let the runs happen. Get us into the right run, number one. Obviously, know the run checks, that’ll set you free and get you from 2nd and 4 instead of 2nd and 7. That’s a big thing, that’ll open your playbook a little bit. You wanna throw the ball more than 20 times? Get the run checks. You start missing run checks, they’re gonna be pissed, and they ain’t gonna call passes. Right? So that was a big one.”

Steelers fans will remember facing Sanchez in an AFC Championship outing in 2011, where he nearly helped the Jets overcome a 24-0 hole in Heinz Field. This AFC Championship took place in Sanchez’s sophomore year in the NFL, as he won two road playoff games including one against quarterbacks Tom Brady and Peyton Manning. In fact, this was his second AFC Championship berth, as he also accomplished this feat during his rookie season in 2009. Sanchez’s play, while not spectacular by any means, was enough behind an elite defense and run game. All of this is to say, Sanchez knows a thing or two about the role of a young quarterback with a run-first defensive team.

For Pickett, fundamentals such as run checks and staying within the system will be huge in his development as a young quarterback. While the situation he is stepping into is far from a mirror image to Sanchez’s, his best bet for initial success may just be assuming a game-manager role early on. Diverting away from the system to attempt big-time throws and be the hero is a gamble Pickett cannot afford to lose, as the ramifications of losing his confidence as a result are sure to stunt his development.

“Letting it come to you,” Sanchez continued. “When it’s time to make a play, your natural instincts that got you to this level, to be one of 32 or one of 64 in the world, one of the best to ever do it, it’ll take over. And you know when it’s fourth down, everything on the line, I’m gonna fit this ball in. But we’re backed up, down ten, twilight of the second quarter, we’re going into half, down ten in our own 25, now is not the time to fit a ball in double coverage. No wishing, hoping, or praying on any of those reads.”

The fact is, Pickett must earn the trust of the coaching staff to allow for the risky throws that many great quarterbacks made a name for themselves by taking. This will take a lot of time, and Pickett must pick and choose when to take risks wisely. This speaks to the difficulty of playing the quarterback position, especially with the pressure of being the presumed successor of 18-year quarterback Ben Roethlisberger. On one hand, not taking chances can give the appearance of being a limited quarterback. On the other, making too many mistakes by taking too many chances is also a trap that many young quarterbacks have fallen into. For Pickett to have success, he must prefect the art of picking his battles with the defense.

On the bright side, Pickett’s skill players will not have any shortage of talent, and it does not appear that the team plans to rush him into action with veteran quarterback Mitch Trubisky appearing to have secured the starting job. After impressing in his preseason debut, it is reasonable to be excited for Pickett, but it simply cannot be stressed enough that time will tell. While Sanchez’s career trajectory is not one to hope that Pickett emulates, his first two seasons of making the AFC Championship behind an elite defense certainly are.