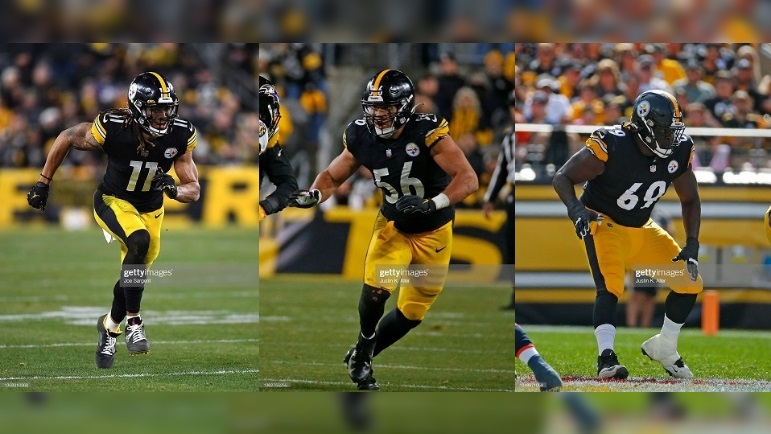 With 35 days now remaining before the Pittsburgh Steelers play their 2022 regular season opener on the road against the Cincinnati Bengals, the team has now managed to sign three players to lucrative contract extensions this summer. Those three players extended were safety Minkah Fitzpatrick, kicker Chris Boswell and wide receiver Diontae Johnson. With the Steelers now seemingly done with contract extensions for this offseason, today is a terrific opportunity to look ahead at the team’s most likely candidates to sign contract extensions next summer. This list only includes players who will be in the final years of their current contracts in 2023.

WR Chase Claypool – 2022 will be a big season for Claypool as the former second-round draft pick out of Notre Dame will attempt to show that he is worthy of a lucrative contract extension during the summer of 2023. To date, Claypool has recorded 121 receptions for 1,733 yards and 11 touchdowns in addition to rushing 24 times for 112 yards and two touchdowns. The biggest knock on Claypool to date is that he hasn’t won enough vertically in the NFL. He also needs to get back to being the combative catcher he was during his rookie season and in college and start showing he can stay on his feet on the receiving end of long pass attempts to boot.

It will be interesting to see if Claypool sees a huge uptick in slot playing time in 2022, which is something he did at a low percentage in college. An increased “big slot” role for Claypool in 2022 could produce an increase of targets for him within 12 yards of the line of scrimmage and thus more opportunities to do more after the catch. The Steelers’ extending of Johnson this offseason, coupled with the team’s drafting of two young wide receivers in George Pickens and Calvin Austin III, makes an extension for Claypool next offseason seem unlikely as the 2022 regular season draws nearer. That speculation aside, a huge 2022 season from Claypool might could change that outlook. He’ll need at least 80 receptions and 1,000 yards receiving in 2022 to firmly place himself in lucrative extension conversations next summer.

OLB Alex Highsmith – Like Claypool, 2022 will be a big season for Highsmith, as the former third-round draft pick out of Charlotte will also be looking to prove that he is worthy of a lucrative contract extension during the summer of 2023. To date, Highsmith has recorded eight sacks and 122 total tackles, with 20 resulting in lost yardage. He’s also been credited with 21 quarterback hits to date to go along with one interception, two passes defensed and one forced fumble in regular season play. With Highsmith now being an unquestioned starter in 2022, he should have a legitimate shot at becoming a double-digit sack producer for the Steelers this upcoming season, especially if the other star players in the defensive front all remain healthy.

Highsmith has progressed nicely in his development in each of his first two NFL seasons, and thus another jump should be expected in 2022. The Steelers did not select an outside linebacker in the 2022 NFL Draft, and that sets the stage for Highsmith to force the Steelers to seriously consider signing him to a lucrative contract extension next summer, especially if he hits double-digit sacks or delivers his best pressure rate to date. Highsmith turned 25 years of age on this offseason Sunday, so there’s a decent chance he could be celebrating the signing of a lucrative contract extension on his 26th birthday exactly one year from today.

G Kevin Dotson – The Steelers’ 2020 fourth-round selection, Dotson, is currently in a training camp battle this summer for the starting spot on the left side of the offensive line. It’s imperative that he wins that battle if he wants to have a legitimate shot at putting himself in contention for a lucrative contract extension next summer. Dotson is continuing his transition to the left guard spot in 2022 after primarily playing right guard throughout his long college career at Louisiana-Lafayette. That transition was interrupted halfway through the 2021 season as an ankle injury prevented him from playing in the team’s final eight games.

Staying healthy and being the Steelers’ best offensive lineman in 2022 is not out of the question for Dotson, who many considered a huge steal for the team in the 2020 NFL Draft. The Steelers offense figures to be a run-heavy team in 2022 to boot, and that should fit Dotson’s skillset well, assuming he wins the starting left guard spot come Week 1 of the regular season. The Steelers love retaining road-grading offensive linemen, and with Dotson set to turn 26 a week into the 2022 season, there seems to be a big opportunity for him to prove he is worthy of an extension a year from now. At worst, a solid 2022 season for Dotson could result in the Steelers not needing to address the guard position in the first half of the 2023 NFL Draft.