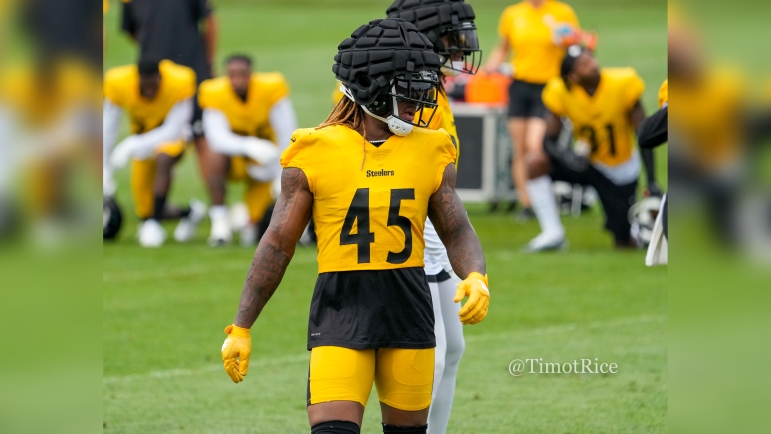 The Pittsburgh Steelers have cut the bulk of the players needed to get down to a 53-man group by 4 PM today. Their roster currently sits at 56, though newly-acquired Malik Reed will soon become the 57th player. Headlining the “first wave” of cuts is LB Buddy Johnson.

We have made roster moves in advance of today’s 4 PM deadline to trim the roster. @BordasLaw

Other names cut include:

Johnson was the team’s fourth-round pick a year ago. He spent most of his rookie season inactive and struggled this summer, failing to make a second-year jump in his play. He was easily beat out by seventh-round rookie Mark Robinson, who is on track to make the roster.

Safety Elijah Riley joined the team just days ago and played well Sunday but was part of the team’s initial cuts. Perhaps he can circle back to the roster, assuming Damontae Kazee is carried on the initial 53 and then transferred to IR. Kazee suffered a wrist injury against the Lions.

Vaughns impressed all summer and played especially well in games, including catching the game-winning touchdown pass from Kenny Pickett in the preseason opener against Seattle. He’s a good bet to land on the practice squad. The Steelers’ defensive line was especially deep, leading to the Davis twins and Mondeaux being cut. Odds are, some of those guys will resurface on the practice squad.

Leglue is a notable cut along the offensive line, a versatile player who logged time at guard and tackle this summer. Rader is a reliable blocker but appears to have lost out to rookie Connor Heyward, a wholly expected move. Cody White also brought versatility, but the Steelers boast a deep wide receiver group.

Notable Steelers still on the bubble ahead of the final cutdowns include CB Justin Layne, RB Anthony McFarland, OT Trent Scott, and WRs Miles Boykin and Steven Sims. We’ll also wait and see if the team does anything with QB Mason Rudolph, subject of trade rumors for several days.

Be sure to follow our cutdown tracker for the rest of today’s moves.