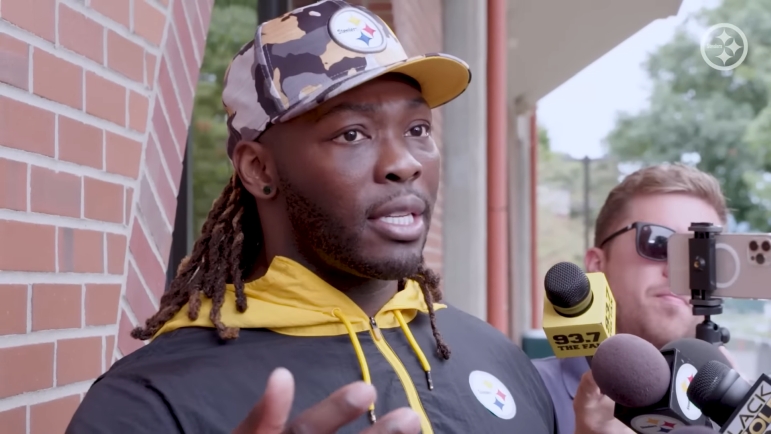 Larry Ogunjobi may be entering his first season with the Pittsburgh Steelers, but he’s amply familiar with how football goes in the AFC North. A 2017 third-round draft pick of the Cleveland Browns, he spent his first four seasons there before joining the Cincinnati Bengals last year.

Now he’s hoping to help end a third consecutive postseason dry spell, the Browns having won their first playoff game since 1994 in 2020, the Bengals their first in 2021 since even longer.

Pittsburgh hasn’t won since 2016, a comparative blink of an eye, but they know their biggest failing past the regular season has been the defense. They’ve made a concerted effort to bolster the unit with some veteran free agents, Ogunjobi being one of them, and he believes you can still win with defense.

“Yeah, for sure. I feel like [you can], and that’s something you gotta go out there and prove”, he told reporters yesterday, via Steelers Live. “The staple has always been defense, so I think that’s just what they’re trying to continue to build, continue to grow on. They had a need for it last year when it came to run defense, and they’re trying to shore it up. I feel like it’s just another opportunity to rise to the occasion”.

I don’t even have to remind you that the Steelers finished the 2021 season ranked dead last in not only rushing yards allowed, but also rushing yards per carry allowed. Those rankings were earned, as born out by the tape.

Many will be quick to point to the defensive line, with the critical absences of Tyson Alualu and Stephon Tuitt. The former is back but the latter has retired, and Ogunjobi is his replacement, in effect. The Steelers signed him to a one-year, $8 million contract shortly after Tuitt made his retirement official.

The pass rush has long been a strength for this unit, but last season exposed major gaps in the run defense. The hope is that they have made enough adjustments, particularly in terms of personnel, to bridge the gap and prevent offenses from exploiting them in this facet.

Of course, the first preseason game was not overly encouraging in that regard. The Steelers were without the majority of their starting front seven for the game—everyone but the inside linebackers—but head coach Mike Tomlin offered the second-string group no excuses for the showing.

Ogunjobi did not play in the opening preseason game. It is not clear if he will participate in the next one, but he did seem to imply that he expects to get some snaps in the exhibition period before the regular season begins.

Coming off of a foot injury that negated a $40.5 million agreement with the Chicago Bears back in March due to a failed physical, the sixth-year veteran is now a full participant in practice, including in live tackling sessions, so he is on track to be ready for September 11. At which point he’ll be looking to bolster the Steelers’ argument that they can win through defense.