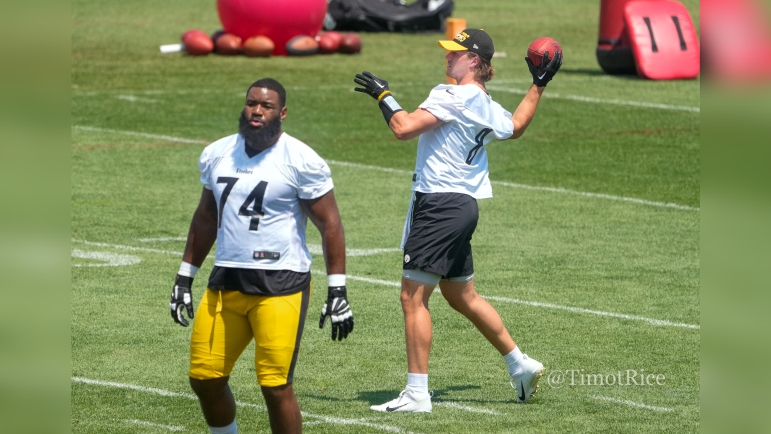 “I mean, I have no problem with starting a rookie quarterback, even with the tough schedule. If you believe he’s the best guy, if you believe he’s ready for everything that you’re going to throw at him. So that to me is all I’m looking for in training camp, is that a daily thing where this guy is living up to the billing, seeing what he needs to see.”

However, given the fact that both Mason Rudolph and Mitch Trubisky have experience starting and are more used to the day-to-day life of an NFL quarterback, I would be surprised if they deem Pickett ahead of those two. Pickett is talented, and he’s going to be the quarterback of the future and probably the Week 1 starter in 2023.

For this year though, Pickett needs to keep developing and getting better each day. So far, he’s improved each week in training camp, and if that progression continues and he plays well in the preseason, then maybe he does start Week 1. I still would count on Trubisky being the Week 1 starter, though.

That level of consistency that Warner talks about is important at all positions, but especially for a quarterback. Week-to-week, the team has to know what they can get out of you. Bad games happen, but quarterbacks can’t afford to stack bad games. For Pickett, showing he can be a consistently good starter and perform a cut above the other quarterbacks on the roster will be how he starts.

I agree with Warner that the schedule shouldn’t matter when deciding when to start a rookie because if he’s actually the best option, he should play. I think the Steelers agree with that line of thinking too, but I just don’t see Pickett showing enough to surpass both Trubisky and Rudolph on the depth chart. If he does though, then he’s clearly shown that he deserves to start and has been the best quarterback. I would be pleasantly surprised if that ends up being the case.

For now, Pittsburgh just needs to find the best quarterback to help them win games in 2022. With their defense as talented as it is, they could find a way to sneak into the playoffs, and quarterback play will help them get there. With the first preseason game on Saturday, we could get our first real glimpse into figuring out who might be the Week 1 starter.