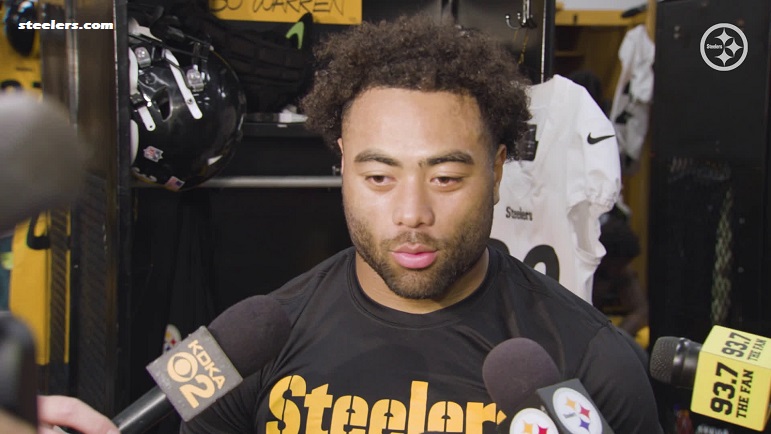 Coaches have to be able to have one thing in any player they put out on the field. Trust. The confidence the player will execute his assignments, avoid critical errors, and can reliably be counted on. That’s football. Blocking, tackling, and trust. Rookie running back Jaylen Warren will have one last chance to do that in Sunday’s preseason finale against the Detroit Lions. His goal is to avoid letting coaches down. Warren spoke to reporters today and talked about his goals heading into the team’s third preseason game.

“I feel like I got more to prove,” he said via Steelers.com. “I just don’t want to have [any] mental errors and gain trust in any situation that I’m put in.”

Warren has impressed throughout the summer and seized the opportunity of the Steelers’ vacancy at backup running back on the depth chart. He’s short but not small and runs with power, breaking tackles, staying on his feet, and requiring multiple defenders to tackle him. He’s also shown a high level of conditioning and effort, staying healthy and available throughout this whole process and finishing every rep. All of which is intentional on his part.

“My run game, I think they just like my hustle. I don’t like to show any quit in my game and I think it’s kind of stuck out more than anything.”

He’s finished every rep he’s gotten this summer, a team-high 53 carries in camp, jogging downfield at the end of each run. He’s played with an aggressive attitude on special teams, picking up one tackle through the first three games, and has a chippy and fearless demeanor. That was first displayed in backs-on-backers during the first day of pads, where Warren shined, but it’s shown up in other moments, like jawing and battling with a blocker on the kick coverage unit.

The only blemish he’s had is ball security. It can be a trust deal-breaker and Warren fumbled in camp and during the preseason opener, leading him to carry a football around throughout practice. Since the Seattle game, Warren’s yet to fumble the football away. If he can hang on tight this weekend, he should sew up his roster spot, beating out veteran Anthony McFarland. Should Warren make the team, it’ll become a question whether he’ll function as the team’s #2 or #3. Pittsburgh has plenty of, there’s that word again, trust in Benny Snell but Warren offers more upside as a runner.

But those are all good problems for Warren to have. He still needs to play well against the Lions, to finish his preseason out strong. It’s one last chance to earn coaches trust before they build their 53-man roster. So he and the other 79 on this roster better make it count.