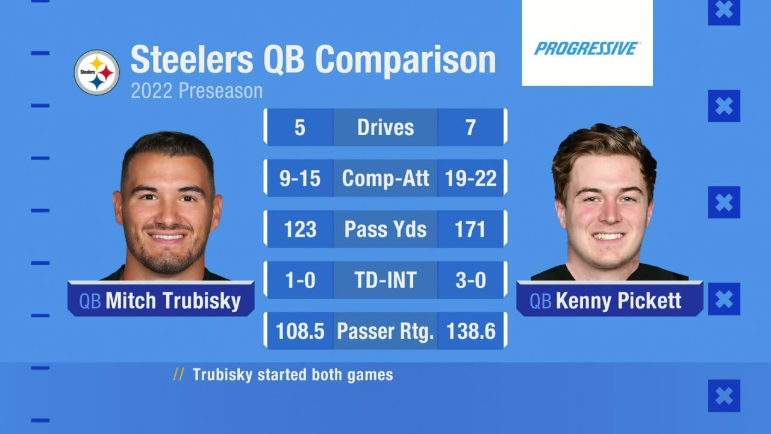 After yet another strong showing in the preseason for Pittsburgh Steelers rookie quarterback Kenny Pickett, the buzz surrounding his case to become the starting quarterback for the black and gold Week 1 on the road against the Cincinnati Bengals on Sept. 11 continues to get louder and louder by the minute.

That’ll happen when you have two impressive performances in a row, especially on Saturday against the Jacksonville Jaguars after he was elevated into the No. 2 role to see more “varsity reps” as head coach Mike Tomlin stated prior to the preseason matchup. Against Jacksonville, Pickett led a masterful two-minute drive late in the first half, completing 4-of-5 passes before finding running back Benny Snell Jr. out of the backfield for an 11-yard touchdown to give the Steelers a 7-6 lead at the half.

Though Pickett continues to light it up in the preseason and is turning quite a few heads, things seem to remain relatively status quo for the Steelers at the position with veteran Mitch Trubisky, signed in free agency, holding down the starting job. While that isn’t quite set in stone, there’s a very good chance Trubisky is the guy against the Bengals no matter what Pickett does in his final preseason action against the Detroit Lions at Acrisure Stadium on Sunday.

That didn’t keep the crew of Good Morning Football of Jamie Erdahl, Kyle Brandt, Jason McCourty and Tom Pelissero from discussing what Pickett needs to do to become the starter in Pittsburgh right away on NFL Network Monday morning.

For McCourty, a former defensive back in the NFL, Pickett just needs to continue doing what he’s doing without worrying about the starting job, because Trubisky’s the guy, like the Steelers have said all offseason.

“I think for him, he has to continue to do what he’s been doing…Mike Tomlin already said his ability to perform under pressure is huge. There’s some guys that have it and some guys that don’t and Kenny Pickett has it,” McCourty said on GMFB Monday, according to video via NFL.com. “But I think with as well as he’s playing him, starting is gonna fall more on Mitch Trubisky’s performance. The only way I believe that Kenny Pickett gets a chance to start for this team is if Mitch Trubisky doesn’t perform. I think Tomlin has already said that he’s the guy leading the pack. He’s the guy who’s performed well, from what we’ve seen in the preseason so far. So I think their starting quarterback position is gonna be the veteran in Mitch. Kenny Pickett, young, promising rookie getting better each and every week, but Trubisky is the guy. They brought him in there for a reason, drafted a guy to be the future, but they want him to be the guy to lead the way, especially starting off the season Week 1.”

Throughout much of the offseason that’s been the talking point regarding the quarterback room for the black and gold. While there has been a three-way competition going on, of sorts, in training camp at Saint Vincent College in Latrobe, Trubisky has gotten a majority of the starting reps in practices and in games, and is fully being prepared as “the guy” to open the season.

Still, Pickett is making a push and is certainly doing his best to make it a difficult decision for the coaching staff to stick with the initial plan of Trubisky.

For Brandt, it’ll come down to what Tomlin wants to do. That might sound obvious, but in the end if Tomlin believes it’s time for Pickett, it’ll be Pickett, and he’ll have to apologize to nobody, especially Trubisky, who may or may not have joined the Steelers under the belief he was going to see the field right away as the starter.

“I think that Tomlin plays a huge role in this, not just because he’s the head coach, but because he’s a made guy as a head coach who can do whatever he wants,” Brandt said on GMFB Monday, according to video via NFL.com. “If you are a young guy or trying to get your foothold in the NFL, you wanna make the safe decision. If Mike Tomlin decides it’s gonna be Pickett, then I’m Mike Tomlin, you’re not, I’ll do whatever I want.

“I think that’s a factor. I think the hometown thing is a factor,” Brandt added. “…I still think this one can come through. I’m gonna give it a 20 percent chance, but I think we got a shot [of Pickett starting]. I really do. And I think Mike Tomlin will apologize to nobody. They don’t have a relationship with Mitch Trubisky. They have no past with him, no future. Mitch Trubisky is a guy. He’s a professional guy and he’s been there, but like, this is not Peyton Manning coming to the Broncos. Like, this is a guy that if you decide when to go with the rookie, not a lot of people’s heads would spin and he might do it.”

.@Steelers @kennypickett10 can “StickIt”. Starts with his ability to read coverage; that’s why he is able to throw with anticipation and deadly accurate. Is their a QB Competition brewing in the Steel City? #HereWeGo #BaldysBreakdowns pic.twitter.com/noG2EpfAXb

As Brandt states, there is no past — or future – with Trubisky. Pickett was drafted No. 20 overall in the first round of the 2022 NFL Draft to be the future for the Steelers at the quarterback position, especially after 18 seasons of Ben Roethlisberger. Very clearly, Pickett was the top quarterback on the board for the black and gold in the final draft for former GM Kevin Colbert.

While it might not be fair to place draft compensation consideration on decision making, in terms of playing time or roles, Pickett’s standing is going to play a role at some point. The decision should mostly be weighed due to on-field performances, but Pickett is making that even harder to give the edge to Trubisky.