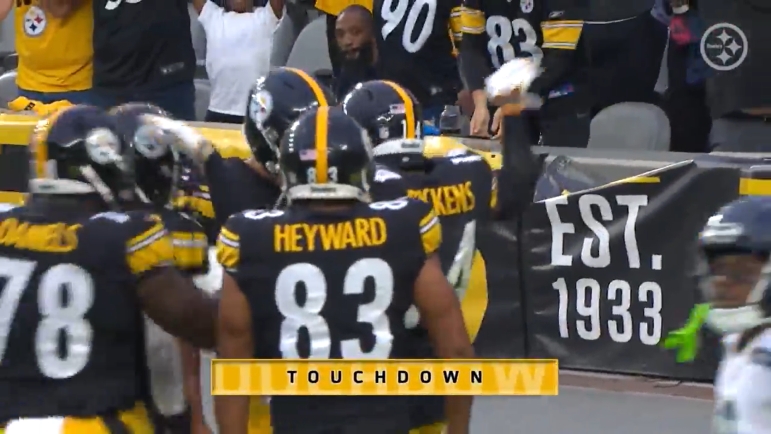 Every preseason is going to mark a ton of firsts, since it involves several hundred new players. Some of them, posterity affords, end up being more significant than others as a harbinger of what’s to come. And that’s what Pittsburgh Steelers second-round wide receiver George Pickens’ first touchdown felt like.

The Georgia product said there was some hesitation after hauling in the 26-yard deep strike from Mason Rudolph because, while he knew that he got both of his feet down inbounds, he was waiting for the officials to acknowledge it. But once he got the raised arms signaling touchdown, it was celebration time—evidently, one associated with former Steelers wide receiver Antonio Brown, a similarity pointed out on Twitter.

Unintentionally, on his part, Pickens told reporters after the game, via Chris Adamski on Twitter. Asked about the celebration by Brooke Pryor and whether or not it was something that he planned in advance if he scored, he said it was nothing like that.

Asked the same thing again in another variation, he added, “It was just in the moment, it wasn’t pre-decided. After I finally knew I made the catch, it was like, ‘Oh shoot, [I’ve got to think up something]’. It wasn’t like a thing I had planned”.

Brown, of course, caught a lot of touchdowns in Pittsburgh, all of them from quarterback Ben Roethlisberger, who retired this offseason after 18 years. Pickens will never get one from the future Hall of Famer, his first in an exhibition game coming from Rudolph.

But he’ll most likely be working with Mitch Trubisky once the regular season rolls around, and eventually, will be catching his passes from Kenny Pickett, the Steelers’ first-round draft pick, who threw two touchdowns on the night, including the game-winner to Tyler Vaughns.

Pickens is expected to be in the starting lineup in three-receiver sets along with incumbents Diontae Johnson and Chase Claypool. That trio is under contract for at least the next two seasons, with Claypool in his third year and Johnson just signing a two-year extension, so that’s a good foundation for the quarterback position as the team transitions away from Roethlisberger.

Already, of course, many of visions of Pickens becoming the Steelers’ next great number one receiver, though right now, Johnson holds the top spot. Brown had previously established himself as not just one of the great Steelers wide receivers, but among the greatest in the game.

Fans, I’m certain, would be much more excited about seeing him emulate Browns’ success between the whistles rather than what comes after it. All other likenesses are purely coincidental.