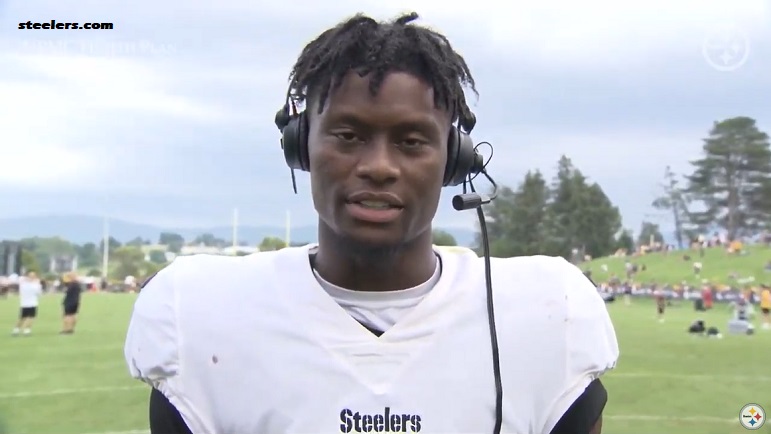 George Pickens spoke to Mike Prisuta and Craig Wolfley after practice via the Steelers’ YouTube channel and told them that if talking trash will help his team win, he’ll do whatever it takes.

There’s been a lot of reports about Pickens talking trash to the defense after he makes a play, and frankly, if that fire helps motivate him, I’m all for it. Receivers and defensive backs go at it all game trash talking back and forth, and Pickens certainly has shown some aggression going back to college against the guys lining up across from him. If trash talking is a natural part of his game and he can back it up, then I hope he doesn’t close his mouth the whole game.

On the flip side, it’s important to be careful not to give the opposition something that motivates them. If a receiver keeps talking and loses a few reps against a corner, then the corner could use that trash talk as fuel to get back in the receiver’s head. It goes both ways, and Pickens just has to make sure he isn’t giving the other team fuel to get them going.

Pickens is going to make an impact this year. He’ll start out as WR3, and barring let-downs from Chase Claypool or Diontae Johnson, will probably stay in that spot throughout the year. Still, I have a lot of faith that Pickens will be solid as a rookie. There’s a lot of hype surrounding him right now, and while I don’t think he’s going to be a 1,000-yard receiver, I could easily see 50-60 receptions for 700ish yards and four or five touchdowns. For a rookie receiver, those are pretty good numbers, and they’re absolutely attainable for Pickens.

Anything more or less wouldn’t be too surprising, unless he has a total dud of a season or he massively overperforms. But when Pickens is on the field, I’m sure the other team will know it, either by his play or his mouth running when he’s out there.