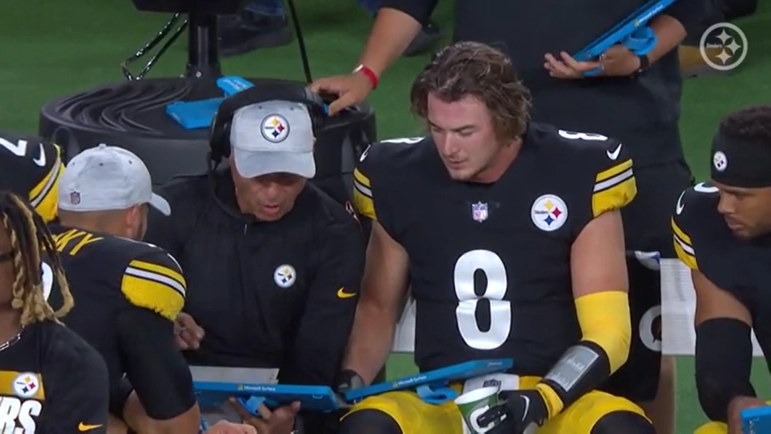 Mitch Trubisky is still expected to open the Pittsburgh Steelers’ regular season as the starter, though rookie Kenny Pickett is making for a closer battle than most anticipated at the start of the summer. ESPN Insider and former Steelers’ beat writer Jeremy Fowler was on Get Up Friday morning to update the team’s quarterback situation.

“Mitchell Trubisky has continued to hold firm on the job but he can’t get too comfortable,” Fowler said. “He’s known that throughout the process. He knows he has to produce. He’ll likely start the game at this point. Kenny Pickett will play, Mason Rudolph might not play. They’ve seen a lot from him, they know what he can do…the feeling around the league is Trubisky will be the guy.”

Framed as an open QB competition, Trubisky has worked as the team’s starter since the spring. Even Mike Tomlin unofficially named Trubisky the starter back in OTAs, essentially making it his job to lose. Trubisky’s play has been a bit volatile but he’s also impressed, making plays behind an offensive line that hasn’t given him enough time, and hasn’t done anything so wrong as to give up his starting spot.

It’s been Kenny Pickett making the late surge. He opened as the #3 to start camp but has progressed since a rough first week, impressing in his two preseason outings. He has the looks of a Day One ready quarterback, but the Steelers are more likely to stick to their plan.

“Right now, all signs are Mitch Trubisky will be the guy.”

The idea of Trubisky being the Steelers’ starter comes as little surprise. Fowler’s comments on the preseason finale quarterback rotation are a little more interesting, noting Rudolph may not play at all. He’s seen extensive action this summer, working the entire second half of last week’s game. According to Fowler, it may just be Trubisky and Pickett playing Sunday against the Detroit Lions as Pittsburgh makes one final evaluation as to who should open the season as “the guy.”