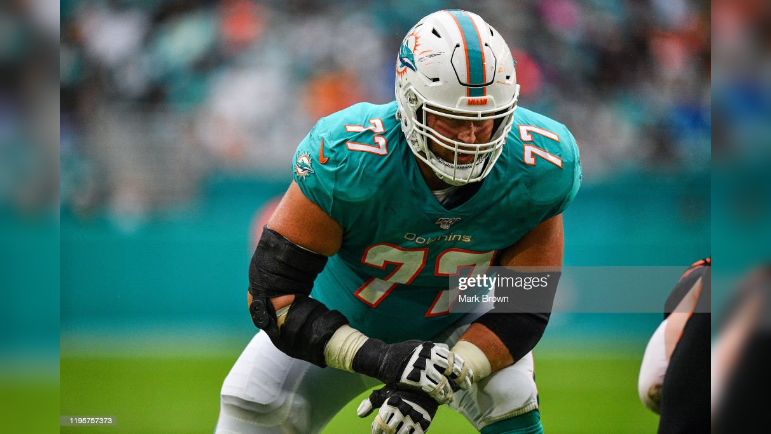 Desperately needing to address the offensive line from a depth and talent perspective coming out of a rather rough and disappointing preseason from the new-look unit, first-year Pittsburgh Steelers GM Omar Khan did about as well as he could — considering the circumstances — prior to the cutdown deadline Tuesday, sending a conditional seventh-round pick in 2025 to the Minnesota Vikings for veteran offensive lineman Jesse Davis.

Davis, who spent five seasons with the Miami Dolphins before signing with the Vikings in free agency this offseason, was making the transition back inside to guard before being dealt to the Steelers for a future draft pick. Though it’s not a move that completely changes the dynamics of the Steelers’ offensive line, it does make them slightly better, at least from a depth perspective.

While in Miami, Davis appeared in 80 games, starting 72 of them while seeing action at left and right tackle and right guard, starting 16 games twice, and at least 15 in four of his five seasons in the NFL. The experience and versatility is there, but the tape leaves a little to be desired overall, especially after allowing 8.0 sacks last season, according to Pro Football Focus.

Still, he’s an upgrade for the Steelers, and a relatively cheap on in the trenches, who could ultmialtey end up starting some games for the black and gold in 2022.

Former NFL offensive lineman Mark Schlereth, who spent 12 seasons in the NFL with Washington and the Denver Broncos, appeared on the 93.7 The Fan PM Show with hosts Andrew Fillipponi and Chris Mueller Tuesday and discussed the Steelers’ acquisition of Davis, calling the veteran a “good player” who is best served as a backup.

“Is he a great or dominant player?  No,” Schlereth added, according to audio via 93.7 The Fan. “But, he’s not going to hurt you from a mental mistake standpoint.  He’s going to be where he is supposed to be. Is he challenged somewhat athletically?  Probably. But, Jesse Davis is a good player.”

I like Jessie Davis more than most. Good versatility. Started 72 career games in Miami playing both tackle and guard spots. He’s experienced and affordable. Like that move for a future conditional pick. #Steelers

You don’t start 72 games in the NFL across five seasons — and at multiple positions — without doing something right. He’s not the most athletic, isn’t the flashiest lineman and certainly isn’t the fleetest of foot in the trenches. He’s often in the right position though and more often than not is blocking who he’s supposed to block on a given play.

In Pittsburgh, it’s best if Davis transitions inside to guard full time and serves in that backup role behind the likes of James Daniels and Kevin Dotson. He’s an upgrade over Kendrick Green and provides serious versatility in the trenches. As Schlereth said, he’s a good player at this stage in his career. He’s not going to fix all the issues the Steelers have up front, but he’s a good guy to have from a depth perspective for a 17-game season.