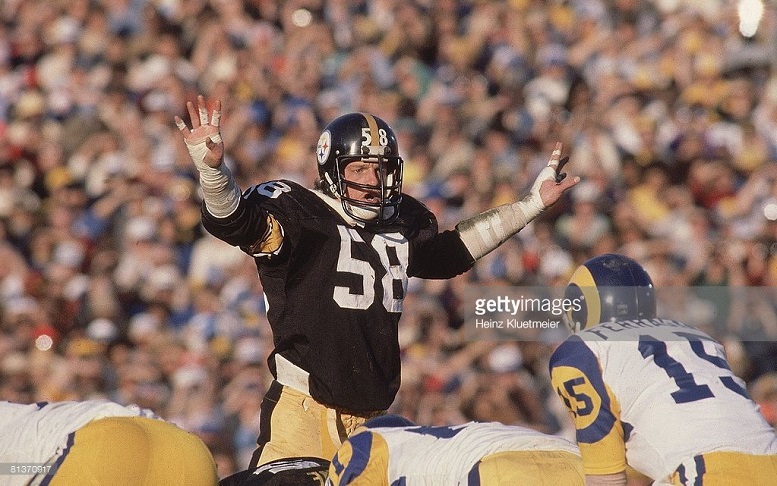 When the phrase “greatest defenders ever” is brought up, oftentimes a trio of Pittsburgh Steelers from the vaunted Steel Curtain come to mind at their respective positions, that being defensive tackle “Mean” Joe Greene, linebacker Jack Lambert, and cornerback Mel Blount.

All three were instrumental in helping the Steelers build one of the greatest dynasties in NFL history in the 1970s, winning four Super Bowls in six seasons while putting together some of the greatest single seasons in defensive history overall.

Knowing that, it was a bit surprising to see not one of the Steelers’ legends earn the title of “GOAT” at their respective positions Wednesday morning in ESPN’s “GOAT” survey focusing on the defensive side of the football. On Tuesday, Steelers center Mike Webster was named the best player ever at the center position, but Greene, Blount and Lambert did not land that title on Wednesday.

ESPN asked 50 experts, reporters and analysts to name the NFL’s greatest player of all time at every position, before then tallying up the votes to get to “GOAT” label.

Shockingly, Los Angeles Rams star defensive tackle Aaron Donald earned 39 of the 50 votes (78%) Wednesday morning to land the “GOAT” title on the interior defensive line. Greene landed five votes total at the position. No disrespect to Donald whatsoever — he’s a first-ballot Hall of Famer and one of the greatest defenders in the history of football regardless of position — but receiving nearly 80% of the votes was rather stunning, especially with guys like Greene and Deacon Jones at the position.

With the 4th overall pick in the 1969 NFL Draft we selected Joe Greene.

“Greene can be credited with revolutionizing defensive line play with his use of a tilted alignment that allowed the him to use his unmatched quickness to slice through gaps,” Colts reporter Stephen Holder said regarding his vote for Greene. Along with Holder, ESPN Fantasy writer Eric Moody highlighted Greene’s integral role in the Steelers’ dynasty.

“He won two NFL Defensive Player of the Year awards, was named to five first-team All-Pro teams and played in 10 Pro Bowls, and one offensive lineman couldn’t block him — which made the Steelers’ linebackers more effective,” Moody writes.

Greene certainly revolutionized the position and became arguably the star of the Steelers’ dynasty, which made him a household name at a less-than-glamourous position.

Behind Greene, Lambert received just three votes at the inside linebacker position in the survey, with Baltimore’s Ray Lewis being named the “GOAT” at the position with 23 of 50 votes (46%). Along with Lambert, Chicago’s Dick Butkus received 13 votes, and Chicago’s Mike Singletary received four votes as runner-ups.

“He was as feared a player as the NFL has ever seen, with his ability to impact the game in different ways (28 interceptions, 23.5 sacks and nearly 1,500 tackles),” Cowboys reporter Todd Archer said regarding Lambert in the survey. “He epitomized the toughness of the Steel Curtain defense in the 1970s.”

The definition of a field enforcer. 👊

If Greene was the face of the Steelers’ run, Lambert was the heart and soul, the one that truly was able to connect with the fanbase overall as that rough and tumble player who wore his heart on his sleeve and played as hard as one possibly could. The photo of a toothless Lambert on the bench remains one of the most iconic photos from that era.

Cornerback and safety are rather hard positions to try and compare eras and truly name a “GOAT” at both positions, considering how much the game has changed over the last few decades. For a guy like Mel Blount, he was very clearly the best at his position during his time on the field, as he was a physical receiver that simply took passing game options away, eventually leading to the NFL creating a new rule because of him.

#OTD in 1984, Mel Blount retired (and wide receivers across the NFL rejoiced). pic.twitter.com/oiYQMiXRBK

Despite his greatness on the field, Blount received just one vote for the “GOAT” at the position. That said, Steelers cornerback Rod Woodson received five votes to tie with Charles Woodson, finishing as runner-ups to Deion Sanders, who received 32 of the 50 votes (64%).

ESPN Fantasy writer Stephania Bell leaned toward Rod Woodson overall in her survey, highlighting his versatility and ability to continue making plays as he aged.

“Versatility within a position is a sign of greatness, and Woodson’s ability to make the tough tackles, steal the ball and sprint either direction — when in coverage or following a pick — certainly fits the bill,” Bell writes regarding Woodson in the ESPN survey. “He is also the only player in the past 60 years to have five seasons with at least six interceptions and a pick-six, and of his 1,483 return yards, 320 came at age 35 or older.”

At safety, Troy Polamalu received two votes in the survey, though San Francisco 49ers safety Ronnie Lott received the majority of the votes with 27 of 50 (54%). Surprisingly, Baltimore’s Ed Reed received 15 votes, distancing himself from Polamalu by a wide margin, though the two were often debated as the best safety in the game during their time in the league.

While it’s great to see so many Steelers defenders that are in the Hall of Fame highlighted in ESPN’s “GOAT” survey, it is a bit disappointing that out of the five mentioned, not one was named the best-ever at their position, and to especially see such a wide margin in the voting between Donald and Greene at defensive tackle.