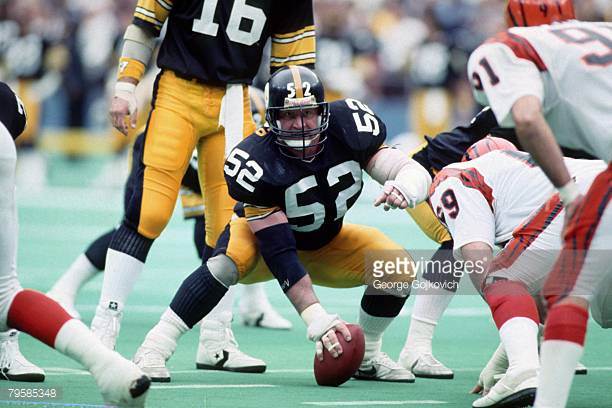 In a career that spanned 17 seasons in the trenches, few centers — if any — in the history of the NFL can come close to touching the accomplishments and overall impact that Pro Football Hall of Famer Mike Webster had from 1974-90.

Webster, a fifth-round pick out of Wisconsin in 1974, went on to start in 217 career games with the Pittsburgh Steelers and Kansas City Chiefs, playing in 245 total from 1974-90. In that 17-year stretch, Webster was a monumental figure in four Super Bowl championships for the Steelers, earning six First Team All-Pro accolades, two Second Team All-Pro accolades, and nine trips to the Pro Bowl.

Along with his accomplishments on the field, Webster racked them up off the field as well, landing spots on the NFL’s All-Decade teams for the 1970s and 1980s. He also earned spots on the NFL’s 75th and 100th Anniversary teams, as well as the Steelers’ All-Time team, and was inducted into the Steelers’ Ring of Honor in the inaugural class of 2017. Prior to that induction, Webster was inducted into the Pro Football Hall of Fame in 1997, five years before his death at age 50 from a heart attack in 2002.

Thanks to his impressive play on the field and his long, illustrious list of accolades, an ESPN panel named Webster the NFL’s “GOAT” at center Tuesday in a piece highlighting the league’s best-ever at each offensive position. ESPN asked 50 experts, reporters and analysts to name the NFL’s greatest player of all time at every position, narrowing the list down to one player at each offensive position. Webster, unsurprisingly, was the top choice at center in ESPN’s “GOAT” survey.

According to the survey results, Webster received 15 of the 50 votes at the position, good for 30% overall. Webster edged out the likes of Jim Otto (13 votes) and Chuck Bednarik (11 votes) to be named ESPN’s “GOAT” at center. Along with Webster, former Steelers great and Pro Football Hall of Famer Dermontti Dawson also received a handful of votes with five total at the position in the survey.

A team captain during the Steelers’ dynasty of the 1970s, Webster split time at center with Ray Mansfield in his first two seasons, but he started the final game of the 1975 season and didn’t miss a start after that until 1986, when he suffered an elbow injury, starting 150 consecutive games as a true ironman at the position.

His ability to stay on the field, but also play at an extremely high level led to him being selected as the “GOAT” at center in ESPN’s survey.

“I gave the edge to Webster thanks to a perfect blend of championship titles, individual achievement and longevity,” ESPN Stats & Info writer Doug Clawson writes regarding his selection of Webster. “He is the only offensive lineman in NFL history with four Super Bowl rings and at least four first-team All-Pro selections. Iron Mike made 150 consecutive starts and had the most games played in Steelers history (220) until Ben Roethlisberger passed him.”

“It’s hard to find a more complete resume than that of Webster, who became synonymous with Pittsburgh’s excellence during the Steel Curtain era,” ESPN’s Jeremy Fowler added regarding the selection of Webster. “His consistency was impressive, and Webster was the total package.”

“The Steelers built a football anomaly; a power running game based on deception.”

Chuck Noll, Rocky Bleier, and Mike Webster discuss the effectiveness of the Steelers’ trap plays of the 1970’s. pic.twitter.com/hrH0U83yHJ

Webster truly was the total package along the offensive line. He was a bit undersized overall coming out of Wisconsin, but his quickness and play strength really set him apart during that era. That size issue led to him falling to the fifth round, and the Steelers were fortunate he did, snapping him up as part of the greatest draft class in NFL history, which also featured the likes of Jack Lambert, Lynn Swann, John Stallworth, and Donnie Shell as an undrafted free agent. Five Hall of Famers in one class…it’s still unbelievable to think about.

Webster was arguably the best amongst them all. He was tough as nails, exceptionally smart, and was a tremendous leader overall, holding down the offensive captaincy role for nine seasons in the black and gold on an offense loaded with stars. He was also the strongest player on the Steelers despite his size limitations, earning him the “Iron Mike” moniker.

Safe to say, ESPN’s panel got this one right with the selection of Webster as the NFL’s “GOAT” at center.