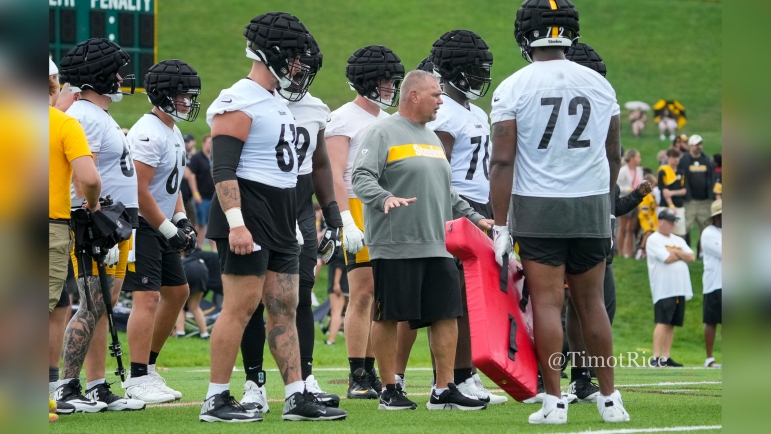 During the offseason, we broke down Pittsburgh Steelers’ new offensive line coach Pat Meyer’s philosophy on pass protection. What he teaches, why he teaches it, and what it looks like on the field. Today, we’re translating that to on-field action. With the Steelers kicking off the preseason last Saturday, we can finally get a really good view of what that looks like.

In this film room, we’ll discuss some of those things Meyer taught in his clinic. His aggressive pass sets, hop steps, and use of independent hands.

The main takeaway from Meyer’s 71-minute clinic are his aggressive pass sets. “First significant contact” is the most important thing Meyer teaches his guys. He wants to get hands on first with a heavy strike/joust. You will not often see the Steelers’ interior linemen give ground in pass protection. They’re setting flat or even forward 2-4 inches.

When it comes to Kendrick Green, this philosophy makes for a roll of the dice. It can go really well or really poorly and basically comes down to his hand placement. In this example, the LG Green has the center sliding away from him in the protection. This means Green has no help and is 1v1 on the DT.

Green’s set is based on how the DT aligns. Though it’s close, I believe Meyer would define this as off Green’s body, meaning the inside foot of the DT is outside the outside foot of Green. The set here is to set flat and attack with a two-handed punch. 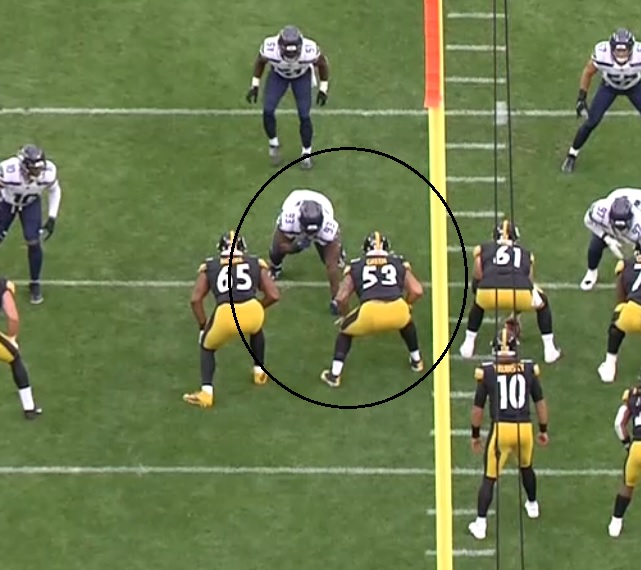 On this play, the DT spikes inside. Green initially sets flat with his outside/set foot and his base gets too wide as he tries to mirror the tackle’s inside rush. His punch is also poor and he does not make first significant contact. The DT gets into his pads and is now in control of the block, out-leveraging him and walking him back. Green struggles to recover and soon gets turned, creating a path to the QB for the DT. It ends with Mitch Trubisky’s throw being off-line and incomplete with him taking a shot in the process.

But there were times where Green won. Here, the center is sliding away with the DT on Green’s body. He is going to set aggressively and makes first significant contact into the DT. He throws a good two-handed punch to immediately control the block. The DT spins and fails and Green is able to mirror it.

Here, the center is sliding away but the DT is on Green’s body. Green does a better job here setting and keeping his base and making first significant contact and getting into the pads of the rusher. He wins this rep with ease and the interior line does its job creating that “bowl shape” Meyer wants.

But this aggressive set has its drawbacks. Later in the game, the center is sliding away from RG John Leglue. The DT is on his body and Leglue sets flat and aggressive towards him trying to make first contact. The DT counters with an outside spin move, causing Leglue to miss his punch and lunge forward. He’s quickly beaten and the DT has a clear path to the QB.

Switching gears, Meyer discussed his way to defend bull rushes. He teaches his guys to use the “hop step,” a common technique in which the lineman gives ground by hopping backwards to reset himself and anchor. For Meyer, a lineman typically needs two hop steps to stall out the bull rush.

Center Mason Cole does a great job of showing us what an effective one looks like. Here, the NT is head-up which means Cole doesn’t post-step and stays square while making first significant contact. Cole does a good job getting hands on the NT early but the DT is able to bull rush and begin pushing Cole back. He uses two hop steps, a small one and then a big one, and the second one stalls out the rush. Pocket isn’t collapsed, at least not by Cole, and he wins the rep.

You can actually see RG James Daniels execute the same hop step though he needs three and is struggling more to stall it out. And yes, Kendrick Green is getting put on skates here and is unable to hop step to try and stall it out.

Meyer also teaches a lot of independent hand punches, meaning fewer two-handed strikes and more high/low punches that make it harder for the linemen to have both his hands struck down at once. Dan Moore Jr. shows a good example of it here (this is actually also the first clip/hop-step play, there was a lot to illustrate here).

Working against the RDE, Moore doesn’t strike with both hands. Here, he punches with his right, inside hand before bringing his left outside hand around and riding the DL down as he spikes inside. A good rep here from Moore.

Meyer also encourages players to flash hands or a “dead hand,” faking a punch to get the defensive lineman to show his move. Here’s what he wrote in that Meyer clinic review.

“He prefers the idea of a low/high punch and flashing a “dead hand” to get the rusher to declare his pass rush move, knock one hand down, and allow the lineman to punch and control the block with the other.”

You can see RG John Leglue execute that here. Facing the 3T off his body, he sets flat and then flashes the dead hand with his right, outside hand. That gets the DL to flash his hands on a swim/swipe, thinking Leglue is shooting his hands. Leglue resets and is able to execute a strong two-handed strike to make – you guessed it – first significant contact and seal the DT upfield.

Two clips of it for you. First from the end zone angle which I’ve slowed down so you can see it better. Below that is the aerial view where you can see Leglue flash that dead hand a little clearer.

So those are some overall clips and examples of what Meyer’s taught and how that applies on the field. A couple final thoughts.

– Kendrick Green. His success rate feels 50/50. He did have quality wins here and him being aggressive isn’t a bad thing. He’s a guy who has to win early. He can’t catch and consistently stall these bull rushes out when guys have a full head of a steam. But he is so hot and cold and has to be perfect with his technique. He has no margin for error.

Reviewing the clips more even writing this, it seems he struggles more with three techs and defenders “off his body.” Even in that hop step clip we showed of Cole, Green is getting walked back again from a 3T off his body. The clips we showed of him winning were against 1Ts where he looked more comfortable sliding down and making contact. Something I’m watching going forward but I strongly believe the bigger, longer, stronger Kevin Dotson is the better scheme fit for what Meyer wants to do.

– Meyer’s flat and aggressive sets are good against power/bull rushes. There’s concern it’ll be a bigger problem against more finesse rushes, like that spin move Leglue lost on. Not that they’ll lose all the time but I could see it being an issue as guys try to flat set or even cross the LOS to set even more aggressively. If I’m a defense, I’m trying to go around these guys, not through.

– Centers are going to be 1v1 more often. To the slide side, the guard is often going to be looking to help the tackle. I didn’t point it out here but the slide-side guard’s job is to not get beat outside and to look for work on the tackle. The center is going to be 1v1 more often this year while the guard is giving help. That’s good for the tackles but more will rest on Mason Cole’s shoulders as opposed to recent years when centers would be giving help and looking for work unless they had a lineman head-up on them.