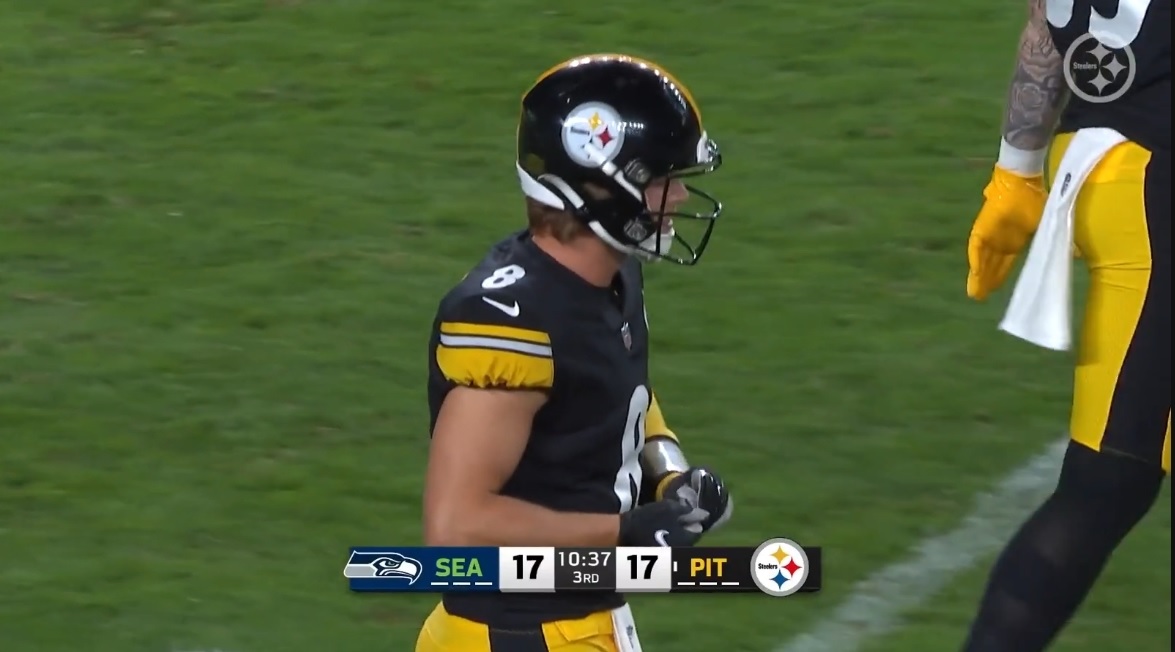 Last night, the Pittsburgh Steelers took the field for the first time, knocking off the Seattle Seahawks 32-25 in their preseason opener. There’s tons of storylines exiting the game but none are grabbing bigger headlines than Kenny Pickett’s debut. It was a strong start, a 13/15, two touchdown performance finished off with a game-winning touchdown.

We’re going to dive deeper into Pickett’s first outing more throughout the week. But to kick things off, I just wanted to offer a brief overview of stats and a couple quick clips that showed his promising play.

To start, I wanted to look at his snap-to-throw times. Last year at Pitt, Pickett had a 3.19 second snap-to-throw time, sixth longest/worst at the FBS level. Throughout his career, he sat at or above the three-second mark, a number that isn’t acceptable by NFL standards. By comparison, the longest to-throw time last year was Philadelphia’s Jalen Hurts at 3.12, one of just three QBs beyond the three-second mark. Though I don’t have official times, the first week of camp showed a similar issue for Pickett, holding onto the ball too long, suggesting he wasn’t seeing the field quickly or cleanly. Since, he’s seemed to speed things up and certainly did last night. I charted his snap-to-throw times on all 16 of his throws, including the two-point conversion to Connor Heyward. Here’s the breakdown of each pass.

That’s an average of 2.04 seconds, more than a full second quicker than what happened last year at Pitt. Now, that doesn’t include scrambles and sacks and yes, some of the Steelers’ concepts asked Pickett to get the ball out quick: boots and rollouts and other short-game concepts, though there were no true WR or RB screens called with Pickett in the game. Overall, Pickett got the ball out quick and was decisive with his reads. Let’s break down just a couple of those moments.

I know, a two-yard completion to Steven Sims isn’t going to lead off SportsCenter’s highlights. But this is a quality rep. Steelers align in a 3×1 formation with Seattle showing two-high pre-snap. On the snap, Pickett checks the backside “X” receiver isolated to the bottom of the screen, often to see if the offense can get a quick win on that side before working the core of the progression. If there’s a blitz or if the CB sits and the receiver’s route can find space, the quarterback can fire that way. But the CB sinks and Pickett moves to the trips side of the route. 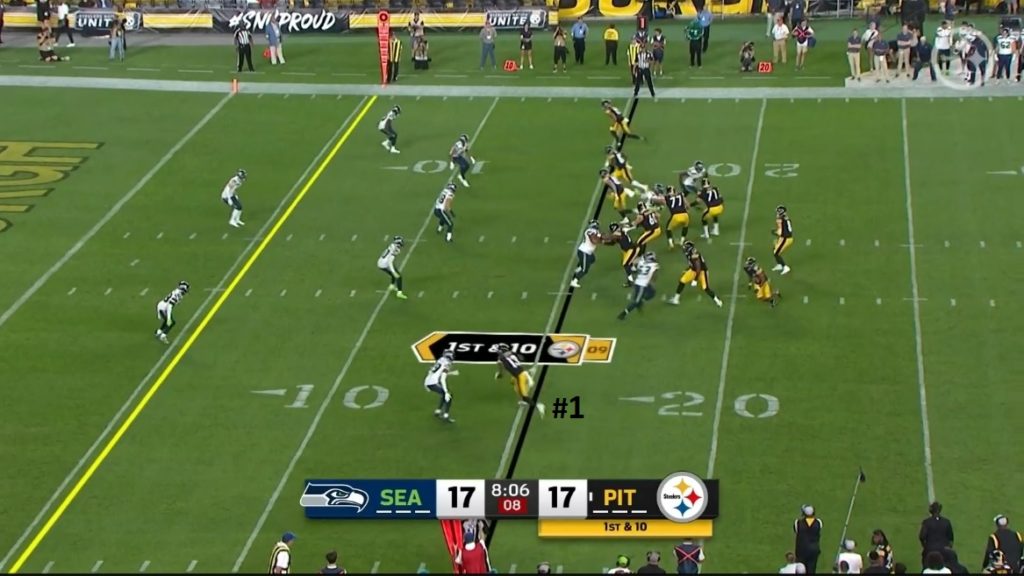 Next Pickett looks for the Z receiver to the top. The LCB is playing off pre-snap but drives on the curl route as Pickett begins to wind up. Pickett realizes this and pulls the ball down and works his next read. 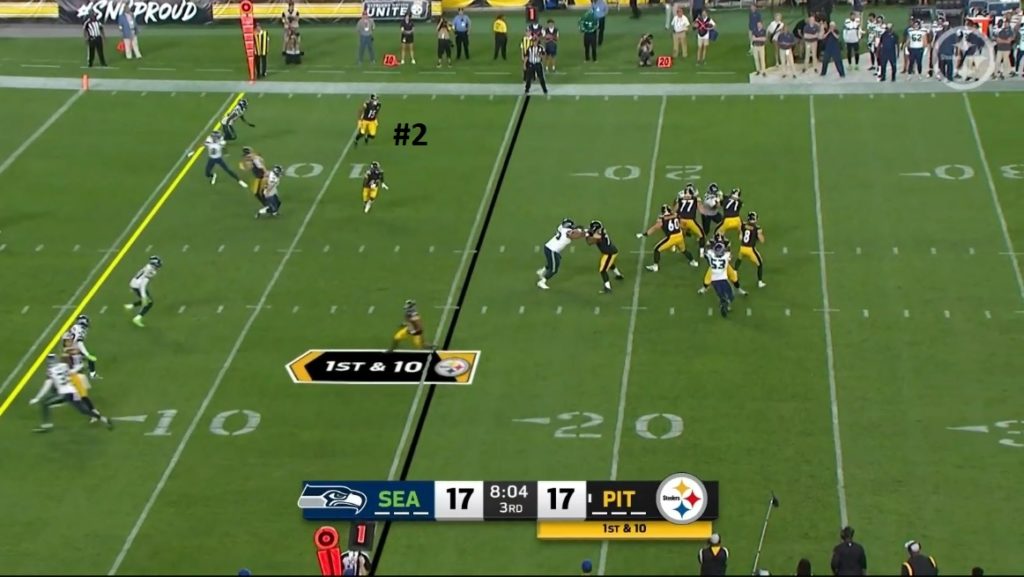 Seattle’s in zone with the linebackers getting depth so Pickett hits Sims on the shallow cross running underneath the zone droppers. It’s his third and final progression and he hits Sims in stride, though Sims probably should’ve gotten upfield for an extra yard or two instead of running laterally. 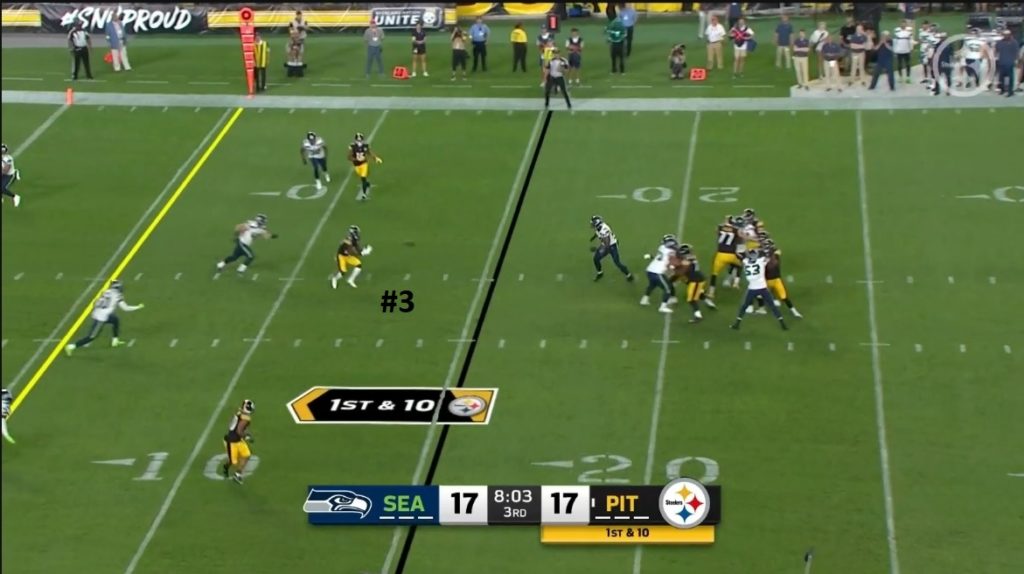 Those were Pickett’s read. Backside X to Z to F. He knew he couldn’t throw to the X and the Y tight end running vertical was matched and carried by the zone-match scheme. Get the ball out on-time and gain a couple yards on 1st and 10 to stay on schedule.

Here’s two looks at the play. Watch Pickett’s helmet and eyes go through the progression.

The very next play. 2×2 formation with the RB running to the boundary at the bottom. It’s a slant/flat combination with the #1 receiver to the bottom running a slant and the RB running out to the flat. The read here is the RCB. He’ll dictate where the ball is going. If he’s a cloud corner who sits in the flat, like in Cover 2, Pickett can’t hit the back and needs to work the slant as the WR finds an open window. If the CB runs with #1 in man-coverage, Pickett can work the back to the flat.

And that’s what happens. Seattle’s in man coverage and the Seahawks’ RCB turns to run with #1 on the slant. The linebacker responsible for the back is a little out-leveraged and has to work through the slant route. He gets a little caught up through the trash and it’s all Pickett and the back Jaylen Warren needs. 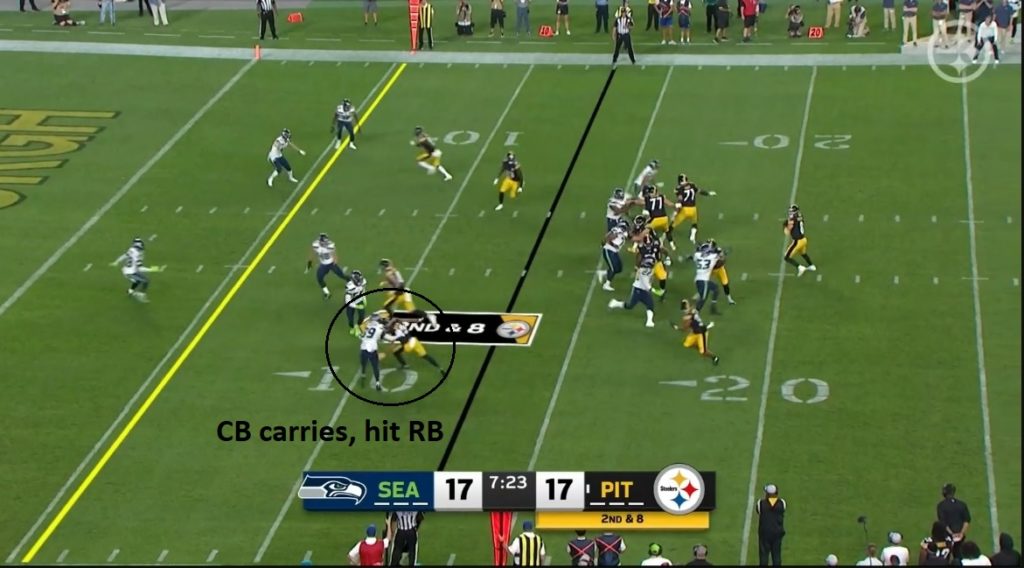 Pickett makes a relatively easy but quick read and hits Warren in stride. Warren races to the corner and nearly gets into the end zone before being tripped up just shy of the pylon.

Two more screenshots I’m going to show. Couple of sideline completions to WR Cody White and WR Tyler Vaughns, the latter the game-winning touchdown. Focusing on timing and accuracy here. On this out route complete to White, look at the placement along the sideline. Away from the defenders but keeping White inbounds for the catch and first down. It’s not shown in the photo but the throw was probably a little late but Pickett got it there with plus accuracy. 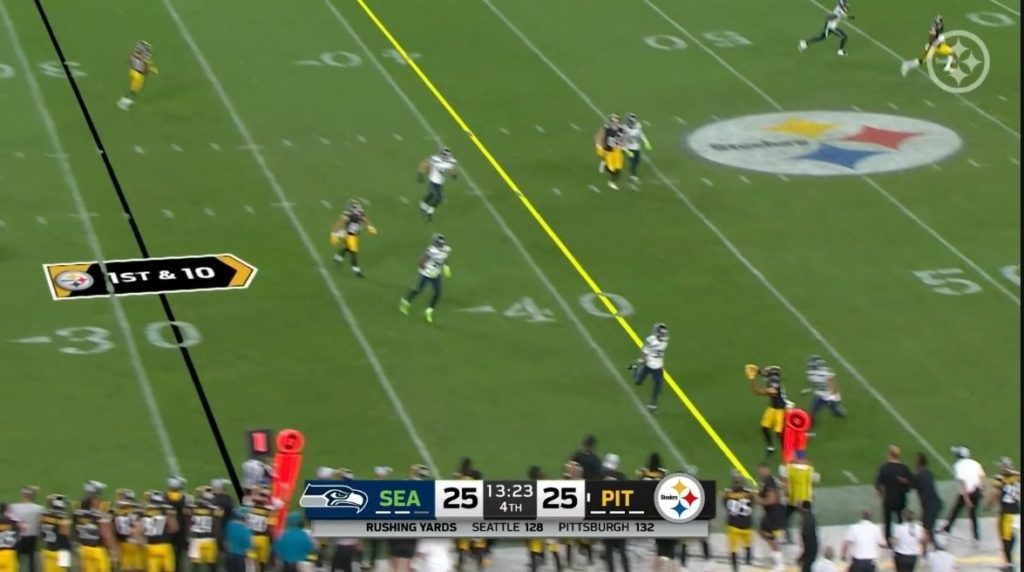 And the TD to Vaughns. Check out the anticipation on the throw. Pickett firing before Vaughns gets his head around, just as he’s coming out of his break. 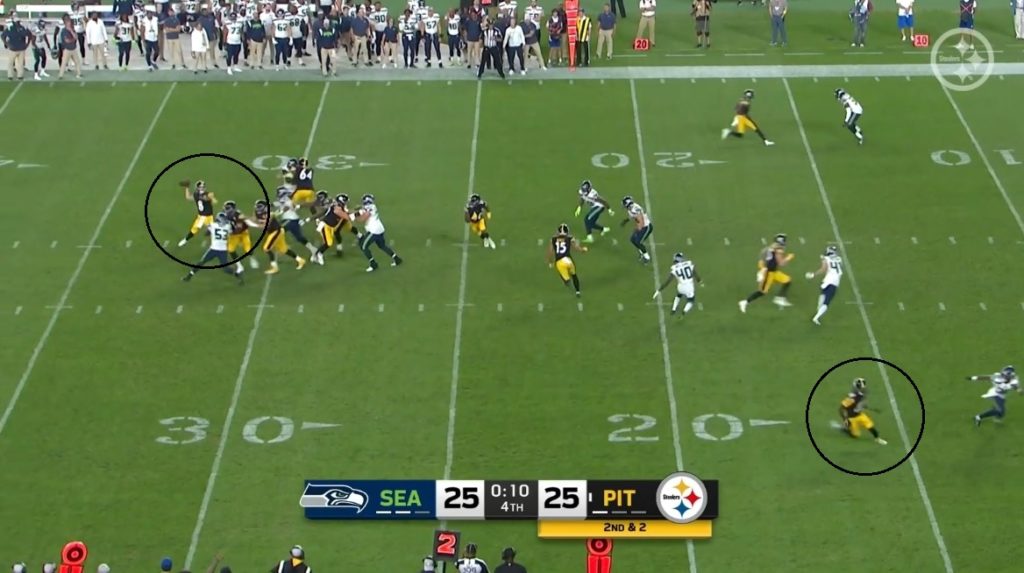 We’ll comb through the tape and find more good and some bad, I’m sure. But off the top, Pickett had a rock solid debut. It wasn’t flashy, he rarely pushed the ball past 10-12 yards, but he did all the little things. Hit his layups, made his free throws, and looked confident and comfortable. He ran that two-minute drill like a champ, so much so that Mike Tomlin didn’t baby him or step in and call timeout on that final play, Pittsburgh in field goal range with a running clock. Tomlin let Pickett have the keys to the car and Pickett put the car in the garage…my poor analogy of a game-winning touchdown. This was all foundational stuff and good building blocks on what’s hopefully a long and successful career.