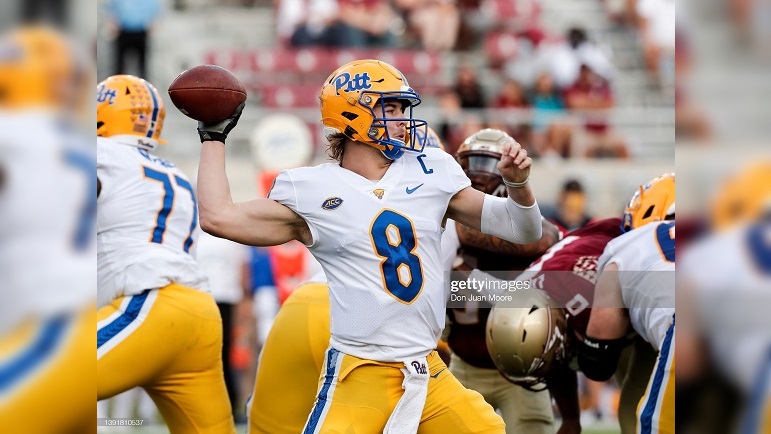 It’s something Steelers fans have become accustomed to in recent years is the short and quick passing game. Ben Roethlisberger led the league during the 2021 regular season in average time to throw at 2.25 seconds. Roethlisberger’s average depth of target also ranked as the second lowest at 7.1 yards.

Over the course of Roethlisberger’s past four full seasons, here’s how he ranked in terms of average time to throw and ADOT.

Roethlisberger, in each of his last few full seasons, had the quickest average time to throw. The trade-off however in throwing quick passes was not throwing downfield based on his average depth of target.

In his final season at Pitt, Pickett not only had his highest average time to throw but also set career bests statistically across the board. The metrics to take a closer look at above is completion percentage and ADOT. A higher ADOT doesn’t necessarily always correlate to having a high completion rate, and it was rare among FBS quarterbacks last year. For perspective, Pickett’s 9.7 ADOT ranked t-61st among 146 QB’s with a minimum of 120 pass attempts in 2021. There were only three QB’s who had a higher completion percentage than Pickett and only two QBs had a higher adjusted completion percentage, while also having an ADOT higher than Pickett’s 9.7 total.

Having more time and/or creating more time to throw is one thing. Increasing production while doing so is another and it’s what helped separate Pickett from not just this year’s draft class but among all FBS quarterbacks last season.

Breaking down Pickett’s average time to throw by depth is also interesting. On attempts 10-19 yards downfield, Pickett nearly averaged the same amount of time to throw on attempts 20+ yards downfield. If you look closer on intermediate throws between 10-19 yards, Pickett’s ADOT was 13.8 yards compared to 29.3 yards on deeper targets downfield. Not even a full tenth of a second added, and Pickett averaged 15 and a half yards more on those deep targets. 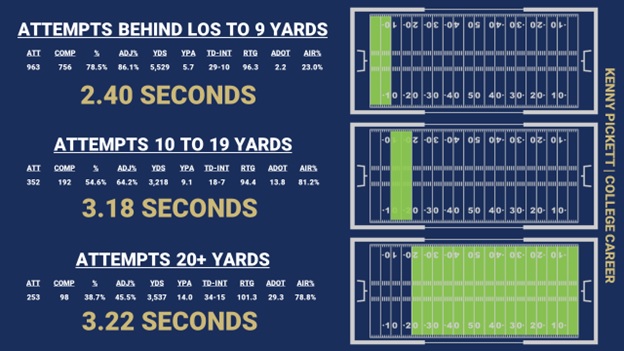 Will Kenny Pickett have this much time to throw in the NFL? Most likely not but there were four QB’s last season with an average of 3+ seconds per attempt. In 2020 there were just two QBs, though.

Pickett’s young legs and mobility should factor into his time to throw in the league. Which may also usher in a different looking passing game for the Steelers moving forward. Undoubtedly Roethlisberger became much more immobile during his final seasons, and perhaps was the cause for the play designs and low ADOT.

Excitement awaits with the newly-minted first-round pick. Time will tell if the Steelers will once again be among the league leaders in targeting receivers downfield.