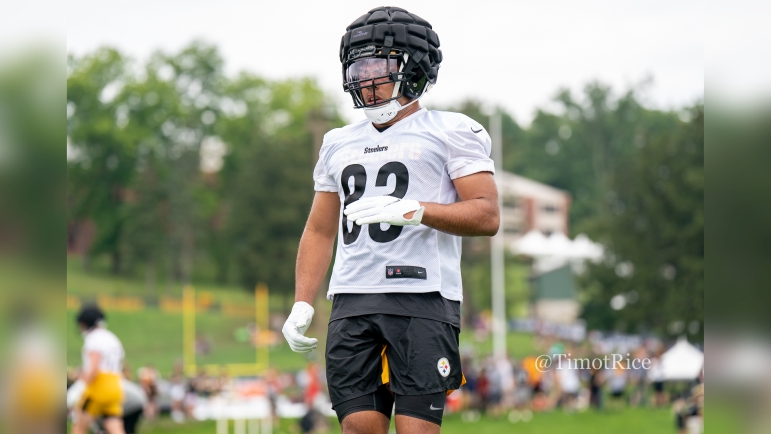 If you know me, and I’m a man who just picked up a Chidi Iwuoma jersey, I love special teams. So while the focus was understandably on Kenny Pickett and George Pickens and the Steelers’ iffy front seven, I had to dive into the special teams tape, the All-22 opening a new window into how those on that unit performed.

The number one thing that stuck out to me was sixth-round rookie Connor Heyward. As an undersized tight end, his role to make the team was through his versatility, his pass catching ability, and importantly, what he could do on special teams. Heyward wasn’t perfect but he did well on the kick coverage unit. Three examples.

Heyward is aligned as L4 on this play. Seahawks return right. Heyward does a good job quickly beating the block to the outside while maintaining his gap, blowing past the Seattle linebacker. He’s able to corner and make the tackle on the return man, tripping him up.

Kick coverage later in the game. Heyward again quickly sheds the block of #98 and though the return is away from him, it’s still a quality and quick win for Heyward here. You want your coverage guys to be able to stay clean and beat blocks.

Last example. Heyward working on #50 and blows by him with a lot of power, quickly defeating the block. He’s the first man to meet the Seahawks’ returner though he’s unable to finish the play, rookie RB Jaylen Warren cleaning things up by making a diving tackle. But Heyward bounced the return wide and kept the returner lateral and slowing him down in the process.

Consistently, Heyward won his 1v1 blocks on the coverage unit. He used swipes and power moves to quickly disengage from blocks, and had good vision on the football. Never was he controlled by a blocker, and he impacted most of Seattle’s returns. He shows the traits and desire to be a solid coverage player. He just needs to work on finishing and closing the gap a bit quicker for more consistent tackles instead of dives and arm tackles. Surprisingly, he didn’t work on the punt return unit, but perhaps they’re not trying to overload him with reps especially given the number of offensive snaps he played. Heyward served as LG on the punt unit.

Speaking of which, I take note of the upback because he is the QB of the defense. Changes there can lead to problems for the entire unit. Marcus Allen’s been nursing a hamstring injury and with him out, Tre Norwood’s stepped into the starting upback role. That led to miscommunication – and nearly a block – on the first punt of the year. Long snapper Christian Kuntz and Norwood end up occupying the same rusher on this twist by Seattle, allowing the other to come in free. Pittsburgh’s fortunate this one wasn’t a block. It should’ve been.

Want to know why the upback matters? Marcus Allen hurt most of the preseason. Tre Norwood replaces this summer. First snap of Seattle game. Norwood/Kuntz not on same page. Free rusher. Should've been blocked. Blocks most often happen with upman/LS miscommunication. #Steelers pic.twitter.com/7jUY4ibYr2

And that’s why a good upback matters. From what I’ve seen over the years, most often punts get blocked because of communication breakdowns between the snapper and the upback. It’s not often a block occurs because a blocker loses a 1v1 matchup. The punt operation happens too quick for that to occur. Even coming off the edge is tough to do because of all the ground the rusher needs to make up. For a block to occur, there almost always needs to be a free rusher, and it has to come in the A or B gaps. Communication to make sure every potential threat is accounted for is about 90% of avoiding punt blocks. A good operation is the other 5% while execution blocking is the last 5%.

Couple quick other thoughts. Justin Layne’s roster odds are fading fast but he’s still putting on good tape on teams. Solo jammer here but he wins big, running the Seahawks’ gunner out of bounds and into a coach. Hard to win a rep more commandingly than this.

Anthony McFarland was tried as a gunner this game in the hopes of increasing his value. He struggled. This was his worst rep. A tough situation facing a vice like this but he’s taken for a ride. You can see it a bit up top with Miles Boykin doing an effective job ripping through and then swiping past the jammers to get some space downfield and be involved in the play. Sure, the defense is trading two for one to block McFarland but that’s one of the first guys who should be downfield. With the punter generally not a threat, it’s now eight Seahawks’ blockers vs nine Steelers’ coverage guys (which also includes the long snapper, take him away and it’s 8v8) a situation Seattle can live with. Returner makes one guy miss and he could be gone.

Some other quick thoughts.

– Tyler Vaughns missed the chance for a long return. I’m just showing the still shot here but he had room to the right side. Tried to cut this one back for some reason. Blockers cleared a path for a long return. 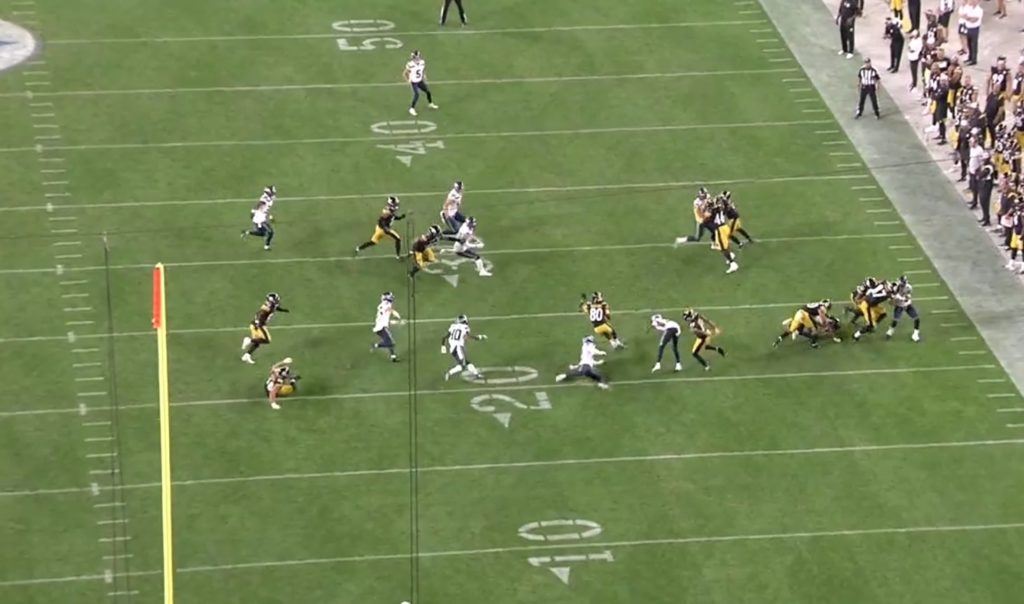 – Mataeo Durant looked like a better wing on the punt team than Donovan Stiner. Durant was more aggressive while Stiner caught his blocks and got knocked off-balance.

– I always look for scrappers. The guys who don’t care about the return and just want to mix it up. TE Kevin Rader was that guy, mixing it up a couple times. He had a good game overall.