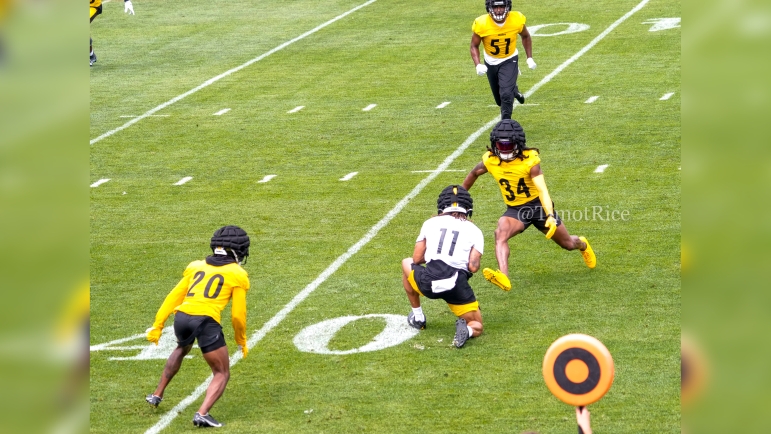 After a pair of seasons as a top ranked pass defense in 2019 and 2020, the Steelers pass defense struggled at times this past season, dropping to the middle of the pack in 2021. After fielding a top three pass defense in both 2019 and 2020, 2021 saw the unit fall to a ranking of 13th, along with a 16th place finish in forced turnovers with 22, particularly disappointing after consecutive seasons finishing atop the league.

The unit’s decline was undoubtedly a result of multiple factors, including but not limited to the collapse of the unit’s run defense, inconsistent ability to generate pressure despite league leading sack production, and offseason losses of multiple impact players in the secondary. Likewise, today, we will be exploring the question as to whether the Steelers pass defense can rebound this upcoming season, and work toward resembling something closer to their consecutive elite seasons as a unit.

The primary goal of any defense is to first and foremost stop the run and make the offense one dimensional. The Steelers defense, which uncharacteristically ranked 32nd in the league as a rush defense, felt the results of both injuries along the defensive line, which left the team without a true nose tackle and forced to rely on unproven talent, as well as inconsistent play from their off ball linebackers. While the front undeniably did not do a good enough job of occupying blockers and keeping their linebackers clean, the tandem of Devin Bush and Joe Schobert struggled mightily to fill holes and make tackles in open space.

With teams consistently able to stay ahead of the chains this season on early downs, offenses were able to get in favorable situations on possession downs, keeping the Steelers from putting their third down pressure personnel into the game. This allowed teams to consistently take advantage of Devin Bush and Joe Schobert, who were arguably even worse in coverage than they were against the run, proving no match for opposing backs and tight ends.

The absence of Stephon Tuitt, who has since retired, along with the exit of Bud Dupree, left the Steelers missing two key cogs of a four pronged pass rush which had wreaked havoc on opposing offenses over the past two seasons. While TJ Watt, who tied the NFL single season sack record, and Cam Heyward combined for 32.5 sacks this past season, the rest of the front was unable to generate consistent pressure as it had in past seasons, leaving the Pittsburgh back seven far more exposed than in years past.

Finally, the Steelers secondary depth was exposed following the departures of veteran contributors in Steven Nelson and Mike Hilton, one of which started on the boundary with the other wreaking havoc on opposing offenses with his unique skills as a slot defender. Hilton in particular was unique in that his ability as a run defender and a blitzer allowed the team to deploy Nickel packages against heavy personnel without putting the unit at a disadvantage as a rush defense.

Their departures tested depth, as Cameron Sutton, the longtime Dime package swiss army knife was thrust into a starting role on the boundary opposite Joe Haden, while the team struggled to find an adequate replacement for Hilton in the slot, shuffling through Arthur Maulet and Tre Norwood, before ultimately concluding that Sutton was the best man for the job.

With Sutton moving into the slot, the team was left to rely on second year UDFA James Pierre opposite Joe Haden in Nickel, a situation which produced inconsistent results and ultimately resulted in far too many explosive play touchdowns in the passing game. Later in the season, after Pierre was benched in favor of Ahkello Witherspoon ahead of a Week 13 contest against the Ravens, the Steelers secondary finally found a capable man on the boundary, with Witherspoon ultimately proving to be the teams best corner down the stretch, finishing the season with team leading figures in interceptions, with three and passes defended, with nine.

Despite less than ideal results, the trail by error approach in the secondary should benefit the team this upcoming season, as Witherspoon is back with a chance to prove his worth as the teams top man on the boundary, Norwood’s experience should pay dividends as he continues to work in sub packages, and Sutton should be able to move around once again, gaining more slot work following the offseason signing of former Buffalo Bill Levi Wallace.

Going into this upcoming season, I would expect the teams base secondary to consist of Cameron Sutton, Minkah Fitzpatrick, Terrell Edmunds, and Ahkello Witherpoon (or Levi Wallace), with Sutton moving into the slot in Nickel to allow the lengthy tandem of Witherspoon and Wallace to man the boundary spots. In the teams Dime packages, Witherspoon and Wallace will likely stay at the boundary spots with Tre Norwood coming into the game in the slot and Sutton moving to his dimebacker spot alongside Myles Jack, where his mobility and football IQ allow the Steelers defense to execute some complex post snap rotations. Entering the season with a potential cornerback room of Cameron Sutton, Ahkello Witherspooon, Levi Wallace, Tre Norwood, and James Pierre, who likely serves as the first man up if Wallace or Witherspoon go down, is lightyears ahead of where the team was entering last season.

The second element, a splash signing which seems to be flying a bit under the radar, is the offseason acquisition of longtime Jacksonville Jaguar, Myles Jack, who will effectively replace Joe Schobert this upcoming season. It has been well documented how the team has struggled to find an effective every down linebacker since the unfortunate career ending injury suffered back in 2017 by Ryan Shazier, and there is some optimism from the team that Myles Jack can fill that void. Regardless, Myles Jack should be the teams best linebacker from day one, and all reports coming out of camp from our Alex Kozora would indicate that Jack is ready to provide a much needed upgrade in the coverage department at the off ball linebacker spot. If he is able to provide sound tackling after the catch along with the ability to effectively play from his hook/curl zone assignments and provide some juice getting after the passer, Myles Jack can certainly help get the pass defense trending back in the right direction.

The final element which should help the Steelers pass defense trend in the right direction is an improved defensive line, which, as a result of both offseason addition and overall unit health, should be vastly improved this upcoming season. First and foremost, the anticipated return of Tyson Alualu provides the team with the run stuffing nose tackle that it missed dearly last season. Expect to start in 3-4 base alongside perennial All-Pro Cameron Heyward and Chris Wormley, who is coming off of a career year. The trio of starters, along with talented back ups in Montravius Adams and Isiah Loudermilk, assuming both crack the 53 man roster, should help the team’s run defense improve mightily, giving the team a chance to dictate opposing offense’s approach on possession downs.

Speaking of possession downs, where sub packages allow the team to put its four best pass rushers on the field, the Steelers may have a four man unit resembling the dominant forces of 2019 and 2020, with a defensive player of the year on the edge in TJ Watt, an All-Pro on the interior in Cameron Heyward, what should be an improved pass rusher at the weak side edge in Alex Highsmith, and a newcomer in Larry Ogunjobi. Last season in Cincinnati, Ogunjobi posted career highs in both sacks, with seven, and TFLs, with 12. He should help provide some juice to the teams interior pass rush alongside Cameron Heyward this upcoming season, helping the team make opposing quarterbacks uncomfortable, which undeniably helps out the back end.

In summary, I think there is reason for optimism to believe that the Steelers pass defense should be able to improve toward something resembling the dominance it showed in 2019 and 2020, and simply put, they’ll need to for this team to compete in 2022. What does a good pass defense look like statistically this upcoming season? I’d say the unit should strive to get back into the top five in yards allowed per game, opponent passer rating allowed, and most importantly, turnovers forced. With uncertainty at the quarterback position for the first time since the 2003 season, the Steelers defense will need to provide their offense with as many shortened fields as possible, along with creating a couple scores with some long returns of their own.

Regardless, replacing an aging Joe Haden, who allowed a passer rating of 103.3, as well as reducing the role of Arthur Maulet, who allowed a passer rating of 138.9 should help improve the secondary. While Cameron Sutton should see his figure improve from the 116.9 he allowed last season seeing more snaps on the inside, Ahkello Witherspoon’s figure of 13.5 provides room for great optimism entering this season. Finally, Tre Norwood, who posted a figure of 119.1 last season, performed far better in the slot than he did as a true safety, a role he will focus on this upcoming season with the addition of Damontae Kazee.

In summary, it is my contention that improved ability both to stop the run and generate consistent pressure up front, the addition of Myles Jack, and the combination of more experience alongside a key offseason addition in the secondary should help the unit rebound in the pass department this upcoming season. While they may not quite register league leading rankings as they did in 2019 and 2020, as I outlined, a top five finish in the three predominant categories of an elite pass defense could set this team up to compete into January. While the run game figures to see improvement with a revamped offensive line and the offense is littered with weapons at its skill positions, it is not a secret that the Steelers defense must step up to the challenge of reestablishing itself as a dominant defense this upcoming season. Let me know your level of optimism for both the pass defense and unit overall entering what should be an interesting 2022 season!