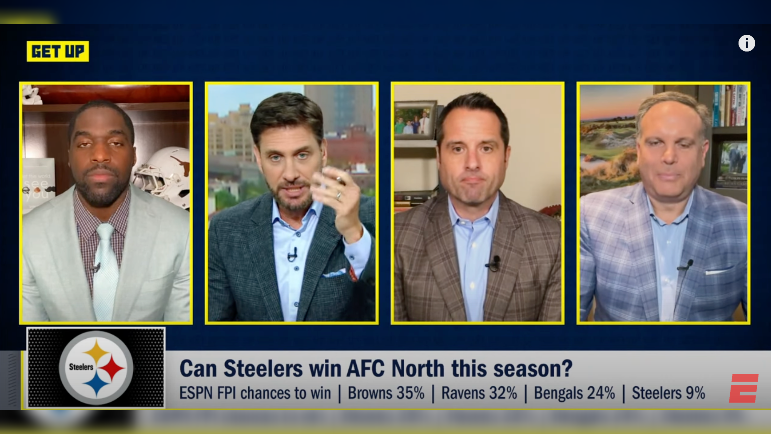 As the NFL preseason pushes forward, it signals another step closer to Week 1, when the games are for real. At a time when many across the nation are holding their fantasy football drafts and analysts are proclaiming the winner of the Super Bowl already, not much love has been shown towards the Steelers. After having the luxury of stability at the quarterback position for the past 18 seasons, future Hall of Famer Ben Roethlisberger walked off into retirement in January, adding a “What now?” element to the team.

Each sports analyst will always have their own takes on things, because that’s what they’re paid to do. Many, including ESPN’s Stephen A. Smith, who’s a noted Steelers fan, proclaimed yesterday he doesn’t think the team is going to do much this upcoming season. However, earlier today on the ESPN’s Get Up, host Mike Greenberg stepped out on a ledge and made a nice forecast for ’22.

“I think the Steelers have more than a playoff-ready defense, they have a running back who I think is ready to be as good as any in the NFL, the offensive line has to get at least a little bit better, their receivers I think are elite and I think the QB play is actually going to be better, whether it’s Trubisky or Pickett,” Greenberg said, according to NFL On ESPN via YouTube. “I think the Steelers are not only going to make the playoffs, I wouldn’t be stunned if they win that very competitive division this year.”

Greenberg caught some flak from panel member and former NFL GM Mike Tannenbaum, who was quick to point out Roethlisberger ranking No. 31 in the league the past two seasons in yards-per-attempt. Tannenbaum generally never has anything positive to say about the Steelers, as he also said he thinks Joe Burrow and the Bengals will own the division the next several years, so his take comes as no surprise.

If we go back over the past decade or so, the team has always seemed to thrive when being cast aside, and not given any respect. While everyone is enamored with the Bengals and their resurgence last year, advancing to the Super Bowl, or the Ravens’ chances this season after being overwhelmed with injuries last year, everyone is sleeping on Pittsburgh.

True, the team lost #7, but they’ve filled a lot of the holes via free agency and the draft. Starting defenders like Larry Ogunjobi, Myles Jack and Levi Wallace were added to an already potent unit littered with All-Pro talents like DPOY T.J. Watt, Cam Heyward and Minkah Fitzpatrick. Several offensive linemen were added to shore up a major weakness, including Mason Cole and James Daniels.

Let’s not forget the QB position, where the team not only added former number two overall pick Mitch Trubisky, they added first-rounder Kenny Pickett, who went 13/15 for 95 yards and two touchdowns, including a 24-yard game-winner with three seconds left in the preseason-opening win over Seattle.

The skill position cupboard is also fully-stocked with Pro Bowlers, including Najee Harris and Diontae Johnson, but also ultra-talented guys like Chase Claypool, Pat Freiermuth and rookie George Pickens, who appears headed for stardom. If the team can come together and rally behind a young QB, it will be a very dangerous team who should have a fighter’s chance in every game. And despite Tannenbaum’s negative remarks, fellow panel member Sam Acho was in agreeance with Greenberg.

“Mike Tomlin, all he knows how to do is win,” Acho said. “So for me, seeing them make the playoffs last year, even with Big Ben struggling, I think they’re going to find a way to be on the fringe, right? I don’t think it’s way off, I think it’s more playoff than way off.”