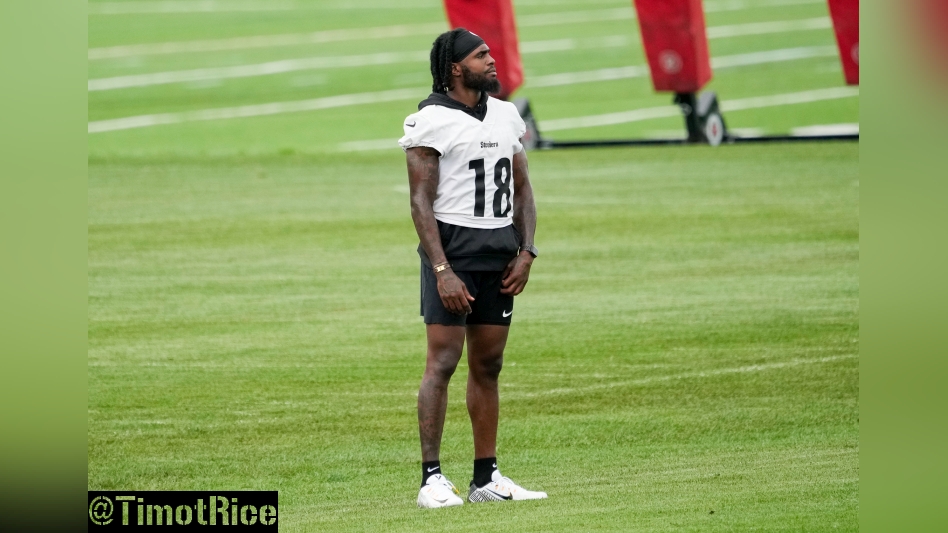 Pittsburgh Steelers wide receiver Diontae Johnson was interviewed before practice earlier today and talked about how Pittsburgh’s young offense has been improving in camp.

“We still growing every day, getting 1% better on the daily, you know, just taking it one at a time. It’s a lot of new information that they throwing at us, but I feel like we doing a great job at retaining the information and putting it on tape and the coach is gonna correct us and just our job to correct our mistakes,” Johnson said, via a video posted to the team’s website.

Becoming a cohesive unit is important for an offense with a lot of new faces, and it seems as if the Steelers are doing so early. While it’s Matt Canada’s second year as offensive coordinator and third year with the team, it’s expected the offense will look different with new personnel across the board, particularly at quarterback. Whoever starts under center this year will be more mobile than Ben Roethlisberger was the last two seasons, and there could be more plays put in that take advantage of that.

In addition, Canada loves to run his jet motion and sweep plays, and with playmakers like Calvin Austin III added, there’s potential to see them called more regularly. With the second full week of camp kicking off today, the Steelers will look to eliminate or at least lessen those mistakes Johnson talked about, and have things run more smoothly.

Pittsburgh’s first preseason game is this Saturday, and the team obviously wants to be as mistake-free as possible as they enter live competition against another team. Being able to get deep into the playbook and prepare for different situations will be important as the team gets deeper into the preseason, but for now, they just have to focus on executing the basics.

Johnson being able to get more reps this week will be key as well, given that he’s expected to be the team’s WR1. Mitch Trubisky hasn’t had too much work with Johnson yet, and having a weapon as talented as Johnson back can help Trubisky (or whoever else is taking first-team reps) out immensely. Fellow wideout Chase Claypool and tight end Pat Freiermuth look to be back at practice today, per a tweet by Alex Kozora, which would help give the first-team quarterback a full array of weapons.

We haven’t seen the Steelers offense in camp yet with everyone available, and it’s going to be fun to see how it clicks. Pittsburgh’s offense is easily their biggest question mark, and it’s a unit that has the potential to take the Steelers further than most people think if they can overperform. With everyone healthy and a game coming up this weekend, this could be the most interesting week of camp so far.