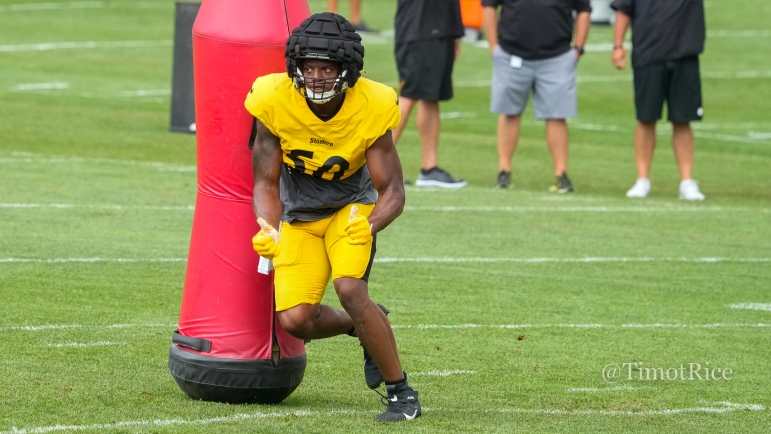 As a former undrafted free agent that has a grand total of seven defensive snaps in regular season action, nothing is promised in terms of having a long career in the National Football League.

OLB Delontae Scott understands this and has made sure to comp to training camp this season with the mindset that he must go out there and earn an opportunity to make the team.

Alex Kozora of Steelers Depot has been in Latrobe closely monitoring training camp drills and practices, having noted multiple times that the outside linebacker has been making plays on multiple occasions.

When Scott was asked about recent praise he got from HC Mike Tomlin for his play in practice, Scott took the road of humility with his response, understanding that the work must be put in to have a shot of sticking on the 53-man roster.

“We are all out here competing,” said Scott according to Teresa Varley on Steelers.com. “It’s a high-level competition. I always try to make sure I keep doing what I can, showing my abilities and what I can do on the field. If Coach T is peaking in, I appreciate it. We still have to work here every day.”

With the first two spots on the depth chart already occupied by T.J. Watt and Alex Highsmith, Pittsburgh likely has at most three more spots available on the depth chart at outside linebacker, with two spots being a more likely scenario. Genard Avery likely has one of those spots called for, leaving Scott, Derrek Tuszka, Tuzar Skipper, and Ron’Dell Carter duking it out for the final spot. To Scott’s credit, he’s come to camp ready to roll despite a lack of experience at the NFL level, having spent time on the Packers’ practice squad in 2020 before arriving in Pittsburgh last season as a practice squad player. His only notable regular season action came against the Los Angeles Chargers last season.

He has an uphill battle to make it past final cuts, but should Scott continue to string together good performances at practice and flash in Pittsburgh’s three preseason games, there is a chance the coaching staff takes notice as he makes his case to stick with the team in 2022.

“As long as I come in and keep working, work on stacking good days,” Carter said. “We have a great group of guys. We’re all competing. I do feel like I have a chance, but it all depends on how everything works out. I always believe in myself and continue to work, trust the process and never get down on myself.”

Mason Rudolph just had two passes batted down over his last three throws. One by Delontae Scott, who is having a nice day. Other by Doug Costin.