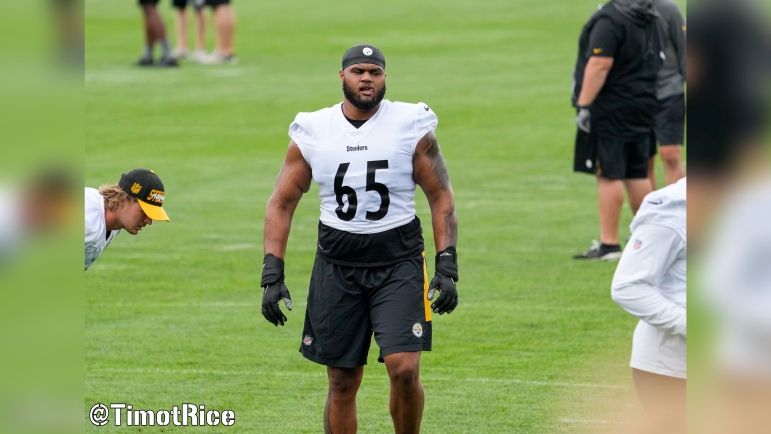 While the Pittsburgh Steelers did make not insignificant investments in their offensive line this offseason, bringing in James Daniels and Mason Cole as veteran free agents, so much of the success or failure of that unit is going to depend upon the evolution of its young starters, perhaps most particularly second-year left tackle Dan Moore Jr.

A fourth-round draft pick out of Texas A&M, Moore was thrust into the starting lineup at the 11th hour after projected starting right tackle Zach Banner had a setback in his recovery from a torn ACL. That development prompted the coaches to kick Chukwuma Okorafor over from the left side to the right and insert the rookie, just a week before the regular season.

To say that he went through growing pains would be an understatement. Taken as a whole, even accounting for his circumstances, one could not possibly conclude that he had a good season. But it was a productive one in terms of gaining experience, one head coach Mike Tomlin expects him to build upon.

“I think it’s reasonable for him to take a significant step”, he said of Moore following yesterday’s practice. “He’s a second-year guy, he’s been through this process. And not only that, he’s got awesome experience through his first lap around the track. I think that he’s been displaying that, so it’s exciting to watch that growth continue”.

The most important thing about Moore’s rookie season is that it followed a generally upward trajectory. Certainly, the majority of his best games, even if far from great, took place in the second half of the year. That’s about all one could have asked him under the circumstances.

Historically a one-sided player, he spent a good chunk of his rookie training camp and preseason slate working to expand his flexibility by seeing time at right tackle. But once they were uncomfortable with where Banner was and made the decision to put him on the Reserve/Injured List to start the season, they determined that Moore at left tackle with Okorafor moving to the right was their best option.

Whether it was or was not, it does play to their advantage this year, since they now have a season’s worth of play with this bookend tackle duo already under their belts. And Tomlin said above that he is already seeing the second-year blindside protector continue to grow his game.

This time, there was no ambiguity. At least after the initial rush of free agency, there has been no question of Moore’s position as the starting left tackle. He was going to be given an opportunity to grow into that guy. While his head coach may be seeing positive signs in the early returns, however, we will not truly know where he is until we get into stadiums with games on the line.