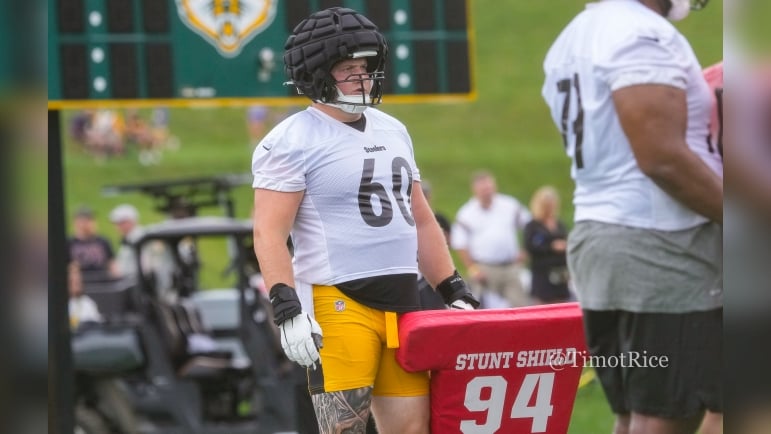 Having started seven games over the last two seasons, backup center J.C. Hassenauer has been one of the central figures along an offensive line unit that’s been receiving its fair share of criticisms for the team’s struggles in the run game. Last year, rookie center Kendrick Green received arguably more than any other member, as he struggled heavily making the transition from college guard to professional center. His game tape showed many issues, one of which was frequently getting rag-dolled, spending too much time on the ground.

The final three games of 2021 saw Hassenauer get the starting nod over Green, with head coach Mike Tomlin stating that he felt he was an upgrade over Green, putting the team in the best position to win. In the team’s final home game, as well as Ben Roethlisberger’s Heinz Field finale, Hassenauer indeed manned the pivot spot, as rookie Pro Bowler Najee Harris steamrolled the Browns for 188 yards, a 6.7 YPC average and a nail in the coffin 37-yard touchdown with under a minute to play that helped propel the team into an unlikely playoff berth.

Last night, the team’s color analyst and former OL Craig Wolfley was a guest on the Letters From Camp podcast with the Pittsburgh Tribune-Review’s Tim Benz, and he spoke very highly of the performance of Hassenauer in camp thus far.

“One of the guys that has been steady and I’ve really enjoyed watching is J.C. Hassenauer,” Wolfley said via the Letters From Camp podcast. “This guy just keeps getting a little bit better and a little bit better each and every time he goes out there, and he cranks it up a little bit more. I think he’s one of these guys that is gonna be a surprising little positive, that he is gonna provide some good backup reps, or whatever reps he’s gonna get.”

The front office did devote some free agency money towards fixing the offensive line earlier this offseason, signing both center Mason Cole and guard James Daniels, arguably the top guard on the market. It remains to be seen how the depth chart may shake out, as the recent rendition shows co-starters at the left guard position, with Kevin Dotson and the aforementioned Green listed there. It’s widely speculated that Green’s skills may be better-suited at guard, his more natural position. It remains to be seen how the new additions will shake out, but Wolfley notes that Hassenauer’s play thus far in camp shows that he’s been working on his game, and that he should provide valuable depth, if nothing else, at the center spot.