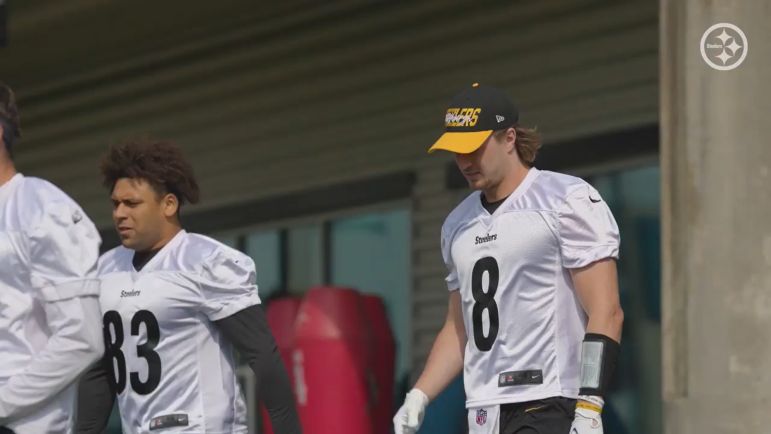 Pittsburgh Steelers rookie TE Connor Heyward caught up with Missi Matthews of Steelers.com to talk about his highs and lows of his preseason action last week against the Seattle Seahawks, as well as being a part of a close-knit group in the TE room.

When asked by Matthews about the two-point conversion Heyward caught in last week’s preseason game from QB Kenny Pickett, Heyward acknowledged that the rookie QB went out of his way to have his trusted target on the field for the conversion attempt.

“Yeah, because we called a timeout prior to that,” Heyward said to Matthews on video via Steelers.com. “I was playing another position in the slot, and he was like ‘I want you right here as the Y closer to the ball’. And I told him that he had to tell Fredo [Roberts]. You know, obviously I wanted to be there as well, but I’m not going to go tell my position coach that right off the bat as a rookie.”

Pickett said after the game in the locker room to the media that he wanted Connor Heyward out there for that play after the TD, stating that Heyward was a guy that he had gotten a lot of reps with throughout training camp and has developed a strong trust in to make a play when his number is called upon. For Pickett to go out of his way and ask TE coach Alfredo Roberts to deploy Heyward the way Pickett wanted on the two-point attempt speaks a lot to the relationship the two have developed with one another in just a short time.

‘I Wanted Connor In There’ For Two-Point Play: Kenny Pickett Talks Trust, Rapport With Rookie Heyward

“It was real cool to see us connect,” Heyward said on the two-point conversion. “I feel like we have a really good relationship on and off the field and it just showed that he trusts me and I know that goes a long way and I know he trusts me and a lot of other guys on the team and hopefully we can all just continue to build that.”

Heyward doesn’t take lightly the trust that Pickett displayed in him last weekend, recognizing it as a key moment in their development as rookies in the NFL, and looks forward to seeing that trust continue to grow with more reps and experience in live game action. The fact that Pickett went out of his way to ask the coaching staff to deploy Heyward a certain way speaks to his maturity and development as a leader in such a short time during training camp. Pickett started out shaky in his performance, but has settled in as of late, completing 13-of-15 pass attempts for 95 yards and two TDs in his first preseason action.

Pickett’s development has prompted Mike Tomlin and the coaching staff to get him extended run with the second string throughout practice this week and have him play in front of Mason Rudolph this weekend as the #2 QB behind Mitch Trubisky. It appears that Pickett has been developing his leadership qualities more on a daily basis, and Heyward recognizes that with the connection they had last Saturday. Now, the two will look to take yet another step forward this Saturday as they take on the Jaguars down in Jacksonville.