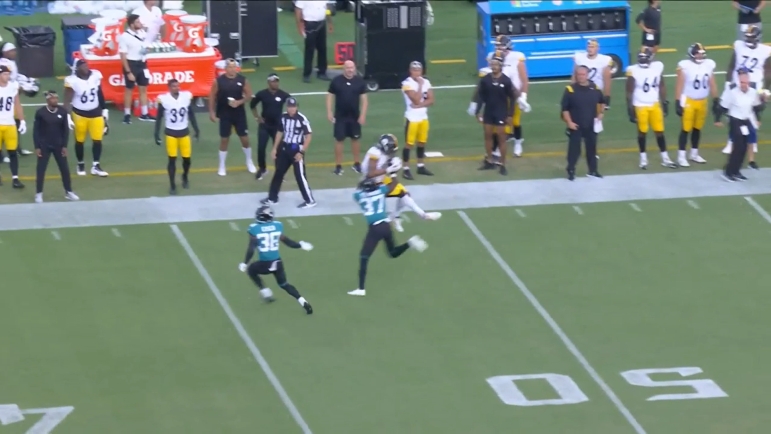 It goes without saying that WR Chase Claypool will be catching passes from a new starting QB in 2022.

The third-year WR has mainly been tied to Ben Roethlisberger in his young NFL career, having the opportunity to play with a likely first-ballot Hall of Famer for his first two seasons in the league. Still, while learning under Ben’s command of the offense had to be a good opportunity for Claypool, he didn’t get to enjoy the prime years of Ben’s career as a passer as the 18-year veteran’s performance dropped off significantly over his last few seasons.

Heading into 2022, Claypool will likely be catching passes from one of Mitch Trubisky or Kenny Pickett who figure to be the top two dogs fighting for the starting QB job in Pittsburgh this season. When asked about the QB competition and if he would have a preference of one man over the other, Claypool stayed on the line, praising both passers for their ability to lead the offense.

“Whoever it is, I’m cool with,” Claypool said on Steelers.com via Teresa Varley. “Mitch has done nothing but a great job,” said Claypool. “I am excited to see how he keeps pushing forward. He is a good funny dude off the field, so anything he says in the huddle, like I need you to get here, or keep it up, feels good. It’s like your boy talking to you so you are going to take it seriously.”

Trubisky and Claypool hit things off early in the offseason when Trubisky invited all the skill position players to his Florida home to run routes together and build some team chemistry with one another. Trubisky has operated as the team’s first-string QB since signing with Pittsburgh in March, thus getting the most reps with the starting offense and Claypool. We have already seen the two link up in preseason play last Saturday against the Jaguars on a nice slot fade down the right sideline.

Still, Claypool sung Pickett’s praises as well due to his rapid development in training camp and his leadership in the huddle.

“I think Kenny’s ball has become more and more catchable,” said Claypool on Pickett. “He has put a nice touch on it. You can see the work that he has put in. You can tell he is very fired up when he gets on the field, very excited. To be out there with poise, it’s cool to see that.”

Pickett’s maturation process thus far this preseason has been exactly what Pittsburgh was hoping for when it selected him 20th overall in the 2022 NFL Draft. He has thrown for 171 yards and three TD to zero INTs in two preseason games, with one of those incompletions being a spike. He has shown poise in the pocket and calmness to drive the offense down the field in the two-minute offense twice, one instance coming at the end of the game against the Seahawks to secure the go-ahead TD, and the other coming last weekend where he took the first-string offense down the field for the TD right before halftime.

Kenny Pickett avoids pressure and hits Claypool. Called back on a hold but still great pocket awareness and a great throw. pic.twitter.com/pRwF5F8PWs

It appears as if Pittsburgh has two good options for the starting QB spot, with Mason Rudolph also being a viable option given his preseason performance to date. While Claypool may have his personal preference close to the chest, he isn’t showing any favoritism to one man over the other, as Pittsburgh has multiple QBs they can roll out there Week 1 as QB1.

“I am really excited because we have a lot of great options,” Claypool said on the QBs.