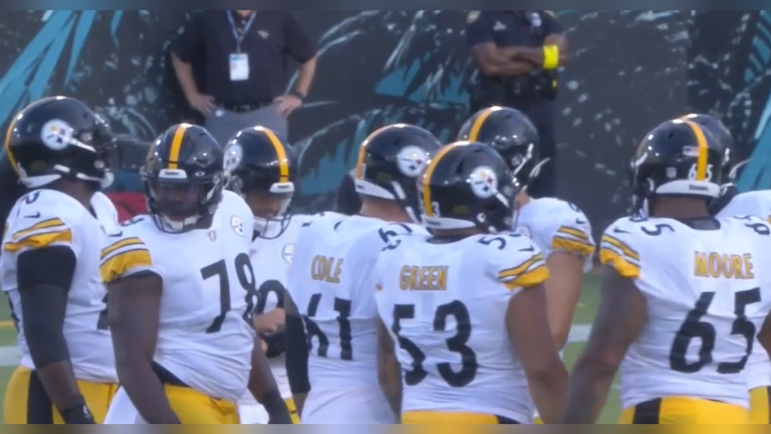 Topic Statement: At least one offensive lineman not currently on the roster will be on opening day, or soon after.

Explanation: The Steelers’ offensive line has not shown any sort of meaningful growth in-game since last season thus far. The first preseason game offered the illusion of an improved running game, but the second put the lie to that. Both in the starting lineup and at depth, there is certainly room for upgrades. The team has already been active on the waiver wire, including claiming center Ryan McCollum.

The Steelers wouldn’t be turning over the offensive line room so much if they weren’t looking for answers that they knew they don’t currently have. Are the Steelers going to acquire a starting lineman over the course of the next few weeks? No, probably not unless they pull off a trade, but they’re bound to add some kind of competition into the mix.

They don’t even have a viable fourth tackle. They’re trying to make John Leglue one, who has by far been most successful at guard, but Chaz Green and Trent Scott are not the answers. Right now, I struggle to make the case to even carry nine linemen.

The only part of the offensive line room the Steelers have turned over is the very bottom, so it would be a mistake to extrapolate much meaning from that. After all, what exactly are we talking about here? Jordan Tucker for Adrian Ealy? Jake Dixon and Chris Owens for William Dunkle. Nate Gilliam for Ryan McCollum? How many of those names would you have even remembered before re-reading them a couple of seconds ago?

You have guys from center to right tackle who have proven to be at least adequate starters, even if not exceptional, who won’t actively lose you games. Kevin Dotson has put good snaps on tape in the past and now seems the inevitable left guard. Dan Moore Jr. has a lot of concerns right now, but it’s pretty obvious that they’re going to give him time.

The only caveat to this is the possibility of Joe Haeg’s availability being an issue. He’s currently in the concussion protocol; if that somehow lingers, then we might see a move along the offensive line. Otherwise, expect this to be the group, barring injury, for a while.