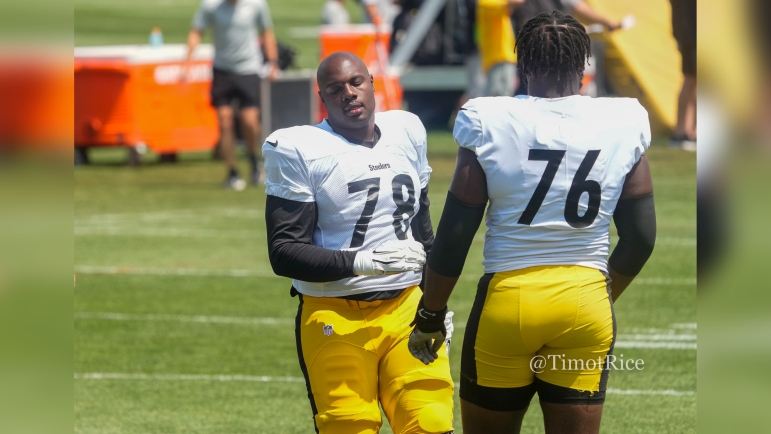 Early returns on new Pittsburgh Steelers right guard James Daniels, signed in free agency to a three-year deal worth more than $26 million, have not been very promising, to say the least.

Throughout training camp at Saint Vincent College in Latrobe, Daniels has struggled in 1-on-1 and team settings, and hasn’t looked like that solidifying piece in the trenches that former GM Kevin Colbert was hoping for when he moved quickly to sign the 24-year-old offensive lineman with more than 50 career starts on the interior in Chicago.

Those concerning early returns continued Saturday night in the Steelers’ preseason opener against the Seattle Seahawks at Acrisure Stadium. Daniels played just 16 snaps in the win in front of new quarterback Mitch Trubisky, but the 16 snaps had plenty of reasons to be concerned.

Kevin Dotson had trouble with Davis brothers late in OL/DL but had good session overall. Handled Heyward and Ogunjobi well. Chris Wormley has had success against James Daniels 1v1 all camp. #Steelers

He struggled to stay connected to blocks in the run game, especially when working to the second level, and had a team-worst 13.2 grade from Pro Football Focus from a pass protection standpoint in Saturday’s win.

While Daniels stated that he was a little sloppy in his Steelers debut and needs to clean it up, former NFL offensive lineman, current NFL analyst and Pittsburgh native Brian Baldinger, appearing on 93.7 The Fan’s PM Show with Andrew Fillipponi and Chris Mueller Tuesday, stated that he has some real concerns with Daniels moving forward.

“I can only speak for myself, but I was kind of sloppy at times. When I get sloppy at times, I think I got Mitch hit a couple times. I have to focus on not being sloppy.”

“I’ve got concerns about James Daniels at right guard right now. He doesn’t look like the same player that came outta Iowa,” Baldinger said to Fillipponi and Mueller, according to audio via 93.7 The Fan. “To me, he doesn’t look like he has the same power now. He was a center in Iowa and I thought he was a really good center because of his movement. But then he played guard because he had good power, but I’m not sure I’m seeing either one of those right now.

“Now it’s early, you know, maybe I’ve got this wrong, but like they’re counting on him to come in and really solidified the interior and…I gotta see it. I’ve gotta see it.”

Maybe his struggles right now are due to him adjusting to a new scheme and a whole new offensive line, not to mention a new position coach that is teaching all new techniques for the veteran. Those are all fair questions to ask in regards to why Daniels is struggling.

"I've got concerns about James Daniels right now. He doesn't look like the same player who came out of Iowa…it's early, but they're counting on him to solidify the interior…I've gotta see it." – @BaldyNFL

But getting this late in training camp and seeing the performance he put on tape against the Seahawks, there’s plenty of reasons to be concerned moving forward. If Daniels isn’t the guy the Steelers believed he was when they signed him, that sets the offensive line back significantly in 2022.

Here’s hoping it’s just taking time for him to settle into his new role in the Steel City. He has to start showing signs he’s working out of those issues real soon.