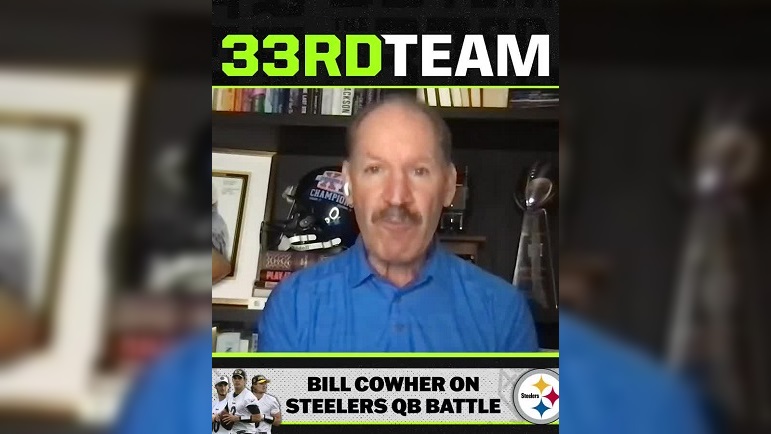 Former Pittsburgh Steelers head coach and recent Hall of Fame inductee Bill Cowher joined 33rd Team recently to give his thoughts on the QB competition in Pittsburgh. Cowher coached Ben Roethlisberger as a rookie in 2004, playing an integral role in his development from a collegiate prospect to the future franchise QB with the Steelers. The two went on to have an impressive 2004 season in Ben’s rookie year where the team went 15-1. The next season, the Steelers made it to the Super Bowl and walked away with their fifth Lombardi Trophy.

Observing the position battle from the outside, Cowher points to several intangible qualities that current head coach Mike Tomlin has indicated will be the deciding factor of who wins the job, stating that poise and confidence take precedent when choosing the man for the job.

“So, I think the biggest thing I want to see is who looks most comfortable,” Cowher said. “Who’s able to be more consistent? Who’s able to take command when they walk into that huddle? And I think that’s something that will take place over time will be in practices. I think you’re going to evaluate a lot of this with the games. And I think the biggest thing you have to do is give them equal opportunity with the first team in the first quarter with each one of them. And at two-minute situation where you have a chance now to run your two-minute offense. So, all these things will play into it. And I think probably by the third exhibition game, Mike and Matt Canada will make a decision on a starting quarterback.”

Tomlin mentioned yesterday after practice on NFL Network that he is focusing on the floor when it comes to the QB position, prioritizing accuracy and decision making when determining who his next starting QB will be. Cowher sees it the same way, having had a team back in the early 2000s that excelled at running the football and playing good defense. This is the identity that Tomlin wants the Steelers to have this year as they head in uncharted waters at the QB position since Cowher held the title of head coach prior to Ben getting drafted, meaning the team may have to go through some growing pains initially with whoever wins the job out of camp.

Cowher also pointed to utilizing the preseason games as a great tool to evaluate all three guys from an equal lens. So far, Mitch Trubisky and Mason Rudolph have been primarily getting most of the reps with the first string with Pickett swing in-and-out with Rudolph with the second and third team units. If Cowher had it his way, all three guys would get the opportunity to start one of the three preseason games with the first team offense to properly evaluate them with the best offensive group to make a fair decision.

When it comes down to who Cowher thinks will win the competition, he took a similar stance to the one he had back when Ben was a rookie in 2004, going with the more experienced player and have the rookie sit back and learn.

“I think ideally, I’m sitting back with Mike and Matt, then I have Mitch Trubisky be the guy or Mason Rudolph be the guy because they’ve been through a 17, 18-week season,” Cowher continued. “They understand the grinds of the National Football League. What the preparation is like, the different looks that you get. And ideally, you don’t put that kind of pressure on a young quarterback in Kenny Pickett, and I think he’s going to be very good in a long run but bringing them along slowly and confidently is to me very, very important.”

Many may forget, but Ben Roethlisberger opened up the 2004 season as the third string QB behind Tommy Maddox and Charlie Batch on the depth chart. Cowher did this to allow Ben to sit and learn from the sidelines instead of trying to throw him into the fire as a rookie QB coming from a non-Power Five school in Miami of Ohio. Sure, he showcased immense talent that made him the #11 overall selection that year, but he still needed a lot of developing to become the player that would go on to have the career that he did.

However, things changed quickly when batch had knee surgery in the offseason, resulting in him going on IR. Maddox got hurt in Week 2 against the Baltimore Ravens, promoting the team to put in Roethlisberger who went on to have a magic carpet ride of a rookie season and never relinquished the starting job for the rest of his career in Pittsburgh.

The time a rookie QB Ben Roethlisberger snapped the Patriots' NFL-record 18-game winning streak on Sunday Oct 31, 2004. Where were you when this happened? #Steelers pic.twitter.com/3DEGg80ZvE

This isn’t to say that Pickett will have a similar impact Ben had when he was inserted into the starting lineup, but rather that Cowher sees the decision like the one he had to make nearly twenty years ago. Trubisky and Rudolph have both started NFL games and have winning records as starting QBs in the league. Instead of throwing Pickett out there too early and risk his development and confidence, Cowher suggests that Tomlin roll with an experienced veteran at least to start the season and see where Pickett’s development goes from there.

Kenny Pickett is the new shiny toy that brings so much intrigue and possibilities to the QB position for the Pittsburgh Steelers. However, the organization must have the long-term future in-mind for Pickett as well as the present where they want to win football games. Thus, it’s fair to expect that Cowher’s suggestion may come to fruition to start the season barring some unforeseen circumstances like what occurred in 2004 or Pickett proving in preseason action that he is too good to keep on the bench when the Steelers take on the Bengals Week 1.