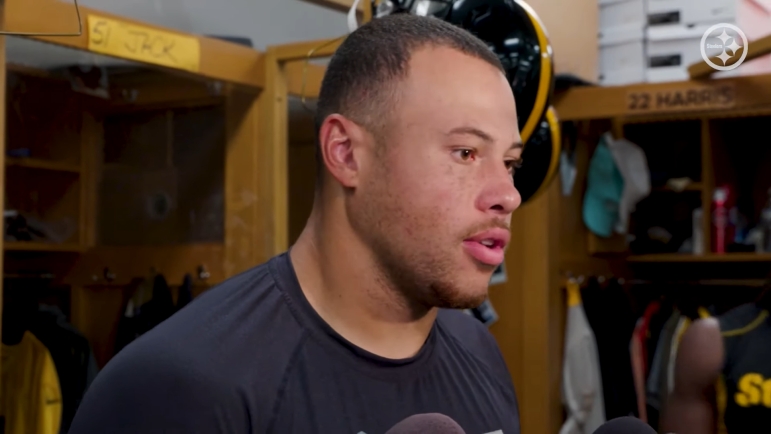 For the second year in a row, health is interfering with outside linebacker Alex Highsmith’s preparation for the regular season. Last year, a late-occurring groin injury limited him early in the season, even regressing after week one and causing him to miss a game, likely affecting him for a good stretch of the year.

Now dealing with a rib injury, the third-year player has not practiced since August 8, over two full weeks ago, which means he has also not played in the preseason. Head coach Mike Tomlin would not rule out his playing in the Pittsburgh Steelers’ finale, though Highsmith was more focused on the regular season.

“We’re optimistic and hopeful about all injured guys participating this weekend and we’ll make whatever necessary, appropriate moves as the game gets extremely close”, he told reporters yesterday when he was asked about Highsmith. “It doesn’t benefit us to make moves and back ourselves into a corner with the game this far away”.

When Highsmith himself spoke to reporters, however, while he wouldn’t rule out playing on Sunday, he had his sights set elsewhere. “Week 1 is the goal, and so that’s what I’m looking forward to doing”, he said, after talking about his excitement to get back on the field.

“I always hate sitting out and sitting on the sidelines and not being able to go out there and participate every single day”, he added. “I’m someone who they’ve got to pull me back, but also I’ve got to be smart. I just know that I’ve got to be out there ready for week one, so I’m excited to get back”.

A third-round draft pick out of Charlotte, he entered the starting lineup on a full-time basis last season following the departure of Bud Dupree via free agency. He finished the year 74 tackles, 15 for loss, six sacks, 15 hits, and a forced fumble.

Many, including himself, have spoken this offseason about their belief that he is very capable of producing double-digit figures the sack category, naming that as a goal this year, and emphasizing that he needs to work on finishing the plays that are there in front of him as the key to doing that.

It must be noted that he had four sacks in his final four games last year, including the postseason, so that offers some encouragement that he was finishing off the season on a high note, and in a spot upon which he could build.

Unfortunately, his development has been put in stasis for half of August because of this rib injury. Though he has stressed that he keeps himself ready so that he can hit the ground running when he is able to return, the time lost he can’t get back.

I will say that it’s probably easier to function at a high level as an outside linebacker with a rib injury, depending upon its positioning and severity, than it is with a groin injury. A common injury is mostly about pain tolerance, even if that pain is significant. It doesn’t as acutely prevent you from contorting your body into certain movements that are necessary to execute your job at the highest level.