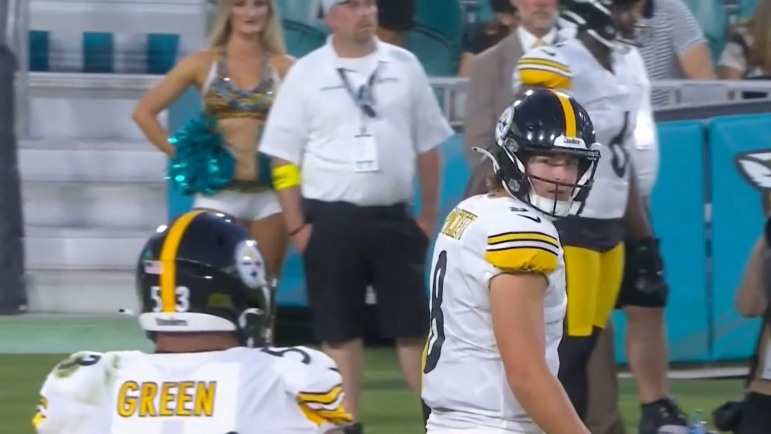 Question: Why did Mike Tomlin pull Kenny Pickett so early from Saturday’s game and play Mason Rudolph for an entire half?

Head coach Mike Tomlin gave all three of his competing quarterbacks roughly equal work, in terms of team reps, over the course of training camp, even if they were not equal in quality—Mitch Trubisky pretty much exclusively took first-team reps, for example.

It was assumed that with Pickett coming in second during Saturday’s game, he would play into the second half, having taken his first snap with under seven minutes to play in the second quarter. But Tomlin decided that he had seen enough in all of eight plays from his rookie first-round pick, and allowed the quarterback he knows more about than any not named Ben Roethlisberger to monopolize an entire half’s worth of in-game evaluation snaps.

Pickett has played about a couple dozen in-stadium snaps. Unless Tomlin is already resolved to not start Pickett at the beginning of the year, which appears to be the case, then on what grounds could it possibly be argued that anybody has seen enough?

I would wager that the most popular answer as to why Tomlin played Rudolph for an entire half at the expense of Pickett getting valuable playing time was to showcase him as trade bait. Maybe that’s at least part of it. Maybe that’s all of it.

But it still leaves me scratching my head. It seems to me to put the lie to the idea that there was ever an earnest quarterback ‘competition’ in the first place, which would certainly not be a controversial opinion. If Pickett were really competing to start in the opener, he would have played in the third quarter.